On December 12, DinDin was as one of the guests to appear on MBC’s “Radio Star.”

Talking about his “Dunia” co-star, DinDin said, “I was moved by Yunho after ‘Dunia’ ended when I told him that I was happy that I met him and that I hoped to see him for a long time. He then sent me a message that said, ‘Okay DinDin. Our relationship isn’t ‘end’ but ‘ing.’”

DinDin continued, “Other people may have said, ‘What is this?’ but Yunho was being sincere. At the ‘Dunia’ team dinner, he put his hand around my shoulder at the entrance. He said, ‘DinDin. There are 62 people here. I’m going to drink exactly 62 glasses today.’ Yunho can’t usually drink well, but he went around and drank with every single person there.”

Hong Jin Young added, “Yunho contacted me yesterday and asked me to take good care of DinDin on the show.” DinDin emphasized the fact that Yunho referred to him as “my DinDin” to Hong Jin Young and showed his pride in the title.

DinDin concluded, “I respect Yunho more than I respect my dad.” DinDin has often talked about how he is a fan of G-Dragon, and he said on the show, “G-Dragon is my idol.”

He continued, “Yunho is someone with a great sense of humanity. He’s someone who needs to be included in the biographies of great men.” 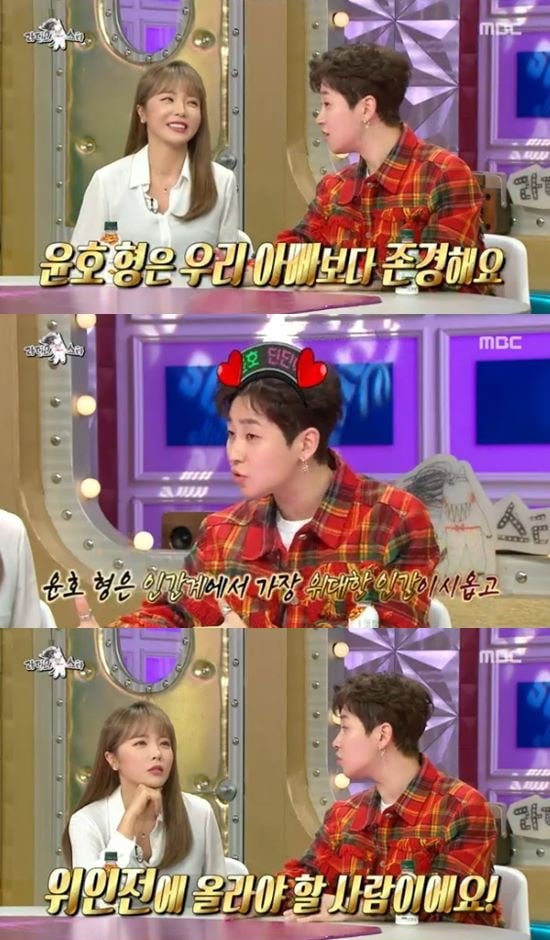