During the episode, Song Mino talked about a time when DinDin called him out of the blue. First off, he revealed the two of them had met during the hip hop episode of “Infinite Challenge.” Then he said, “After that, we didn’t really have a reason to meet, but he always calls me. One day, I answered, ‘Hey, it’s been a while’, and he said, ‘Hi, Mino. I’m on a radio show right now.’ He did that about three or four times already.”

DinDin asked if he could have a chance to explain his side of the story, but Yoo Jae Suk joked, “No, no. We don’t have time.” In the end though, DinDin was able to explain. He said, “We got to know each other after doing a program together. Mino is a top star, but surprisingly, he opened up his heart to me. It might be a nuisance to call him personally, so I used the chance to call him on shows.”

To that, K.Will asked, “Isn’t it more difficult for you to call people on a show?” DinDin disagreed, saying, “Shows are comfortable for me.”

After that, DinDin told Song Mino, “Decide a time for me, and I’ll call you then.” When Song Mino was asked if he would hang out with DinDin if DinDin asked him to, he joked, “For sure I’ll accept his calls, but I think it will be difficult to hang out with him.”

At his response, DinDin cried out, “[I called him on shows] because I would be hurt if he did this!” To comfort him, Song Mino patted his back and shook his hand. 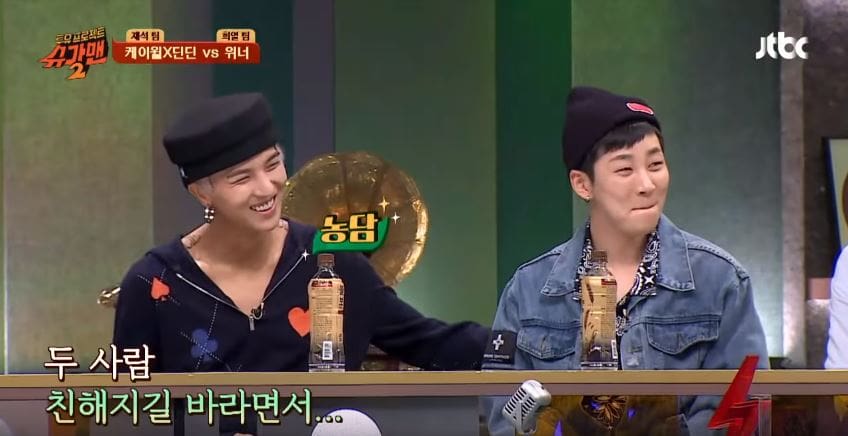 You can watch the performances of WINNER, K.Will, and DinDin on “Sugar Man 2” here.