Dispatch has revealed new details on B.I’s drug scandal, including when and where Han Seo Hee and Yang Hyun Suk met, and a new figure is now also involved: WINNER’s Lee Seunghoon.

On August 22, 2016, Han Seo Hee was arrested for suspicions of violating the Drug Control Act. Police questioned her about using marijuana, which she initially admitted to doing. She also admitted that B.I was involved in the drug scandal. She bowed her head in apology when shown the evidence of the Kakaotalk chat logs.

This was Han Seo Hee’s first offense. She also admitted to the charges. Because there was no fears of her destroying evidence at the time or running away, she was released without detention. At 10:14 pm KST, she was allowed to leave the police station, and even took a picture of it. 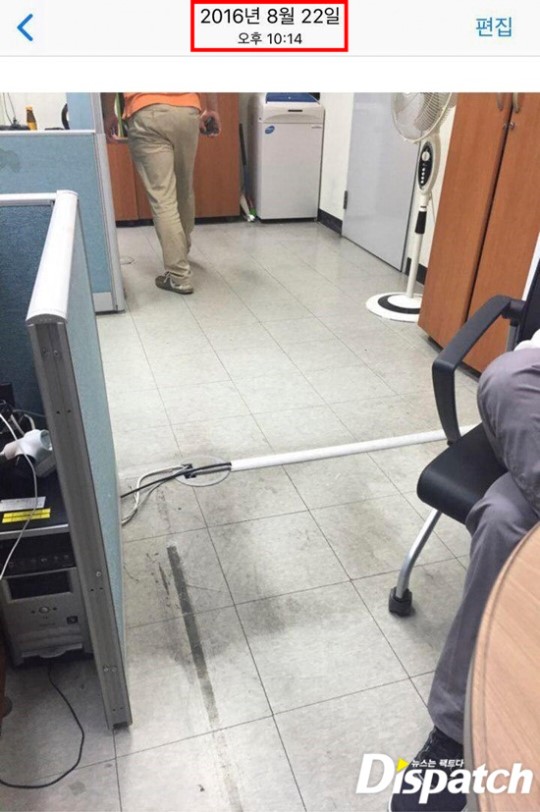 Right after leaving the police station, she called “K”, who was an employee at YG Entertainment. “K” was the same person who told Han Seo Hee that she should call him if anything happens, back on June 1, 2016.

I just got out of the police station. I told them about B.I

Right after hearing this, “K” went to Han Seo Hee’s house, and waited there for her. “K” asked about what she talked about during the police investigation. “K” also went to visit Han Seo Hee the next day, August 23, 2016, and put her in a car. The destination for the car? YG Entertainment.

On August 23, 2016, Han Seo Hee headed to the 7th floor of the YG Entertainment building, where Yang Hyun Suk’s office is. Yang Hyun Suk took Han Seo Hee’s phone and then questioned her, tried to appeal to her, and also coerced her. They spent around 1 hour and 30 minutes in the office, talking.

I will also turn off the power (to my phone), so you should too. Let’s not record (our conversation).

Han Seo Hee felt scared and frightened, and all she was thinking of was how to leave the situation. She ended up getting her phone back by saying she had to call her mom, and that is when she took her infamous YG photo. This poster is in the YG Entertainment bathroom.

I got my phone back to call my mom. I went to the bathroom. I saw the YG poster, so I decided to take a picture of it. I thought there could be a day where I can reveal it. 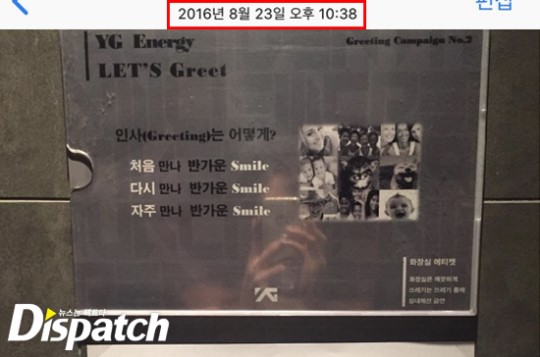 WINNER’s Lee Seunghoon is involved in this scandal because he sent Han Seo Hee Kakaotalk messages on June 1, 2016. He sent her a message in a secret chat room asking her if she had recently met with B.I, and told her to call him at his new phone number. 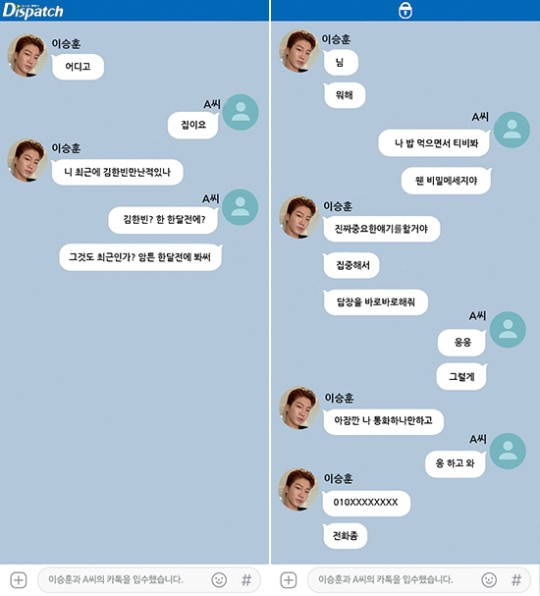 Lee Seunghoon: Where are you?

Lee Seunghoon: Hey. What are you doing

Lee Seunghoon: I’m going to tell you something really important. Pay attention and respond quickly to me

Han Seo Hee: Okay, I will

B.I got caught in the drug test. He said he was smoking (marijuana) with me. I said we should meet up as soon as possible. I went to a location near the YG Entertainment office…

Han Seo Hee drove to the location and was waiting for Lee Seunghoon, but when the passenger door opened, a different face appeared. It was “K”. He turned off the black box and confiscated her phone.

I am taking the place of Lee Seunghoon. This is a secret related to B.I. If anything happens, make sure to let me know.

Dispatch was able to talk with Yang Hyun Suk about what happened on August 23, 2016 in his office with Han Seo Hee.

It’s true that I took her cell phone. I didn’t want her to record it. But I was careful with my words. I told her that we test our artists for drugs twice a month and that B.I has never tested positive even once. I told her that if B.I would go in (to the police) and doesn’t test positive, she could be punished for libel. That’s why she got scared and chose to change her statements herself. If B.I went to the police, he would have 100% tested negative for drugs. No drugs would come out.

However, Han Seo Hee’s account of the meeting is very different, even saying how Yang Hyun Suk talked about how he can get rid of all traces of drugs and threatening her by ruining her.

Yang Hyun Suk took my cell phone and turned it off. He asked me what I said at the police station. I said that he smoked marijuana and attempted to purchase LSD. Yang Hyun Suk said that he hates the idea of his boys getting investigated. He also said they got rid of all of the traces of drugs from his body, so there would be no way he could test positive

I remember him telling me ‘Hey Han Seo Hee! You need to be a nice girl. You can’t be a bad girl right… You dream is to be a singer right? Then you need to stay in the entertainment industry. But It’s really easy for me to just ruin you.’

He told me to change my statement. He said he is someone who can see all of the police reports. He told me he would give me a lawyer, and pay for the lawyer too. I was scared. I didn’t have a choice.

On August 30, 2016 when she was re-investigated, her statements changed. When police asked her about the Kakaotalk conversation with Lee Seunghoon, she denied any involvement with them. She also told police that Lee Seunghoon did not know the full situation either.

B.I was caught using drugs in YG’s drug test. Lee Seunghoon asked me if I had met B.I recently, and there was big trouble. I said it seemed like he got caught using marijuana, and I was not involved with that.

Sitting next to Han Seo Hee during this re-investigation was the lawyer YG Entertainment provided her. According to the detective of the case, the lawyer was acting very uniquely. He would stop the detective whenever he said anything, and even wrote down Han Seo Hee’s answers and showed it instead of letting her talk.