Dispatch Reveals Park Hye Su’s Accusers Are Lying About Their Claims, Shares Text Messages Showing Their Friendship With The Actress

Dispatch has revealed a series of text messages and interviews pointing towards the claims two accusers made against Park Hye Su being false. Instead, the accusers were friends, or at least acquaintances, with Park Hye Su during middle school. 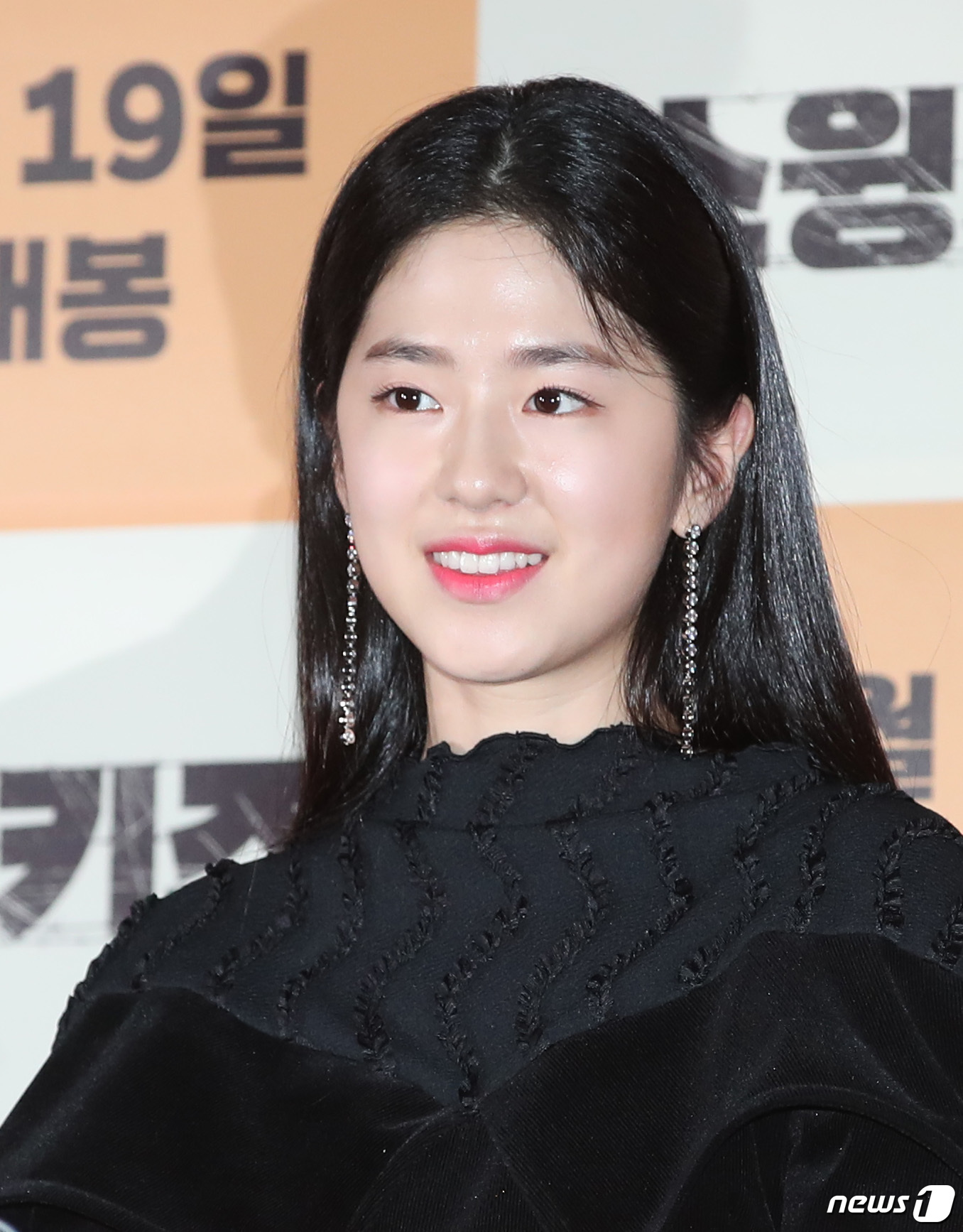 Dispatch began by stating that only statements by the netizens accusing Park Hye Su of school bullying and violence exist, and the authenticity of them cannot be verified. This is especially the case as the alleged incidents occurred 10 years ago. Dispatch stated that they met with students who graduated from Daecheong Middle School, and also obtained Park Hye Su’s cell phone records, revealing text messages between her and the people accusing her of violence.

“A” was a classmate with Park Hye Su. She is a year younger, with Park Hye Su born in 1994 and “A” born in 1996. However, Park Hye Su transferred into Daecheong Middle School as an 8th grade after her study abroad couldn’t be recognized by the school, so she had to defer her education by a year. According to “A”, she was assaulted by Park Hye Su in 9th grade in a classroom. Dispatch secured some text messages between Park Hye Su and “A” from 2010, however not all of them were able to be digitally restored. 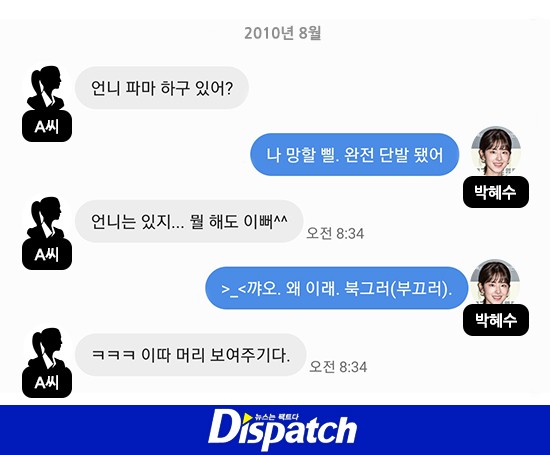 Park Hye Su: I’m so screwed. It looks so much like a bob-cut. 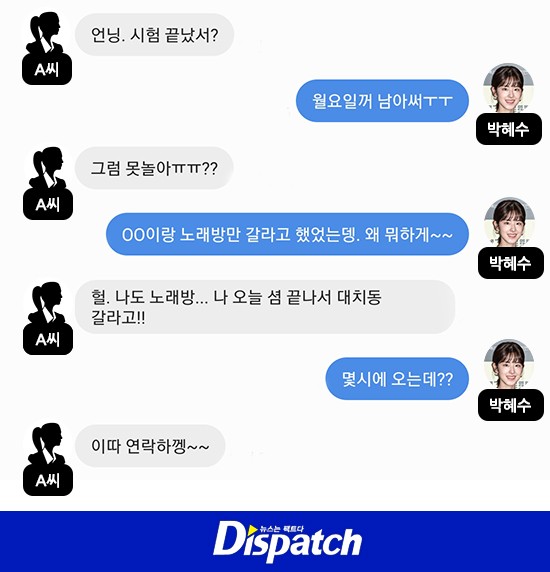 Park Hye Su: I’m just going to karaoke with XX (another student). Why, what are you doing~~

“A”: Heol. I’m also going to karaoke.. I finished my exams today, so I’m going to Daechi-dong!!

Even after graduating high school, “A” and Park Hye Su would message each other on occasion. 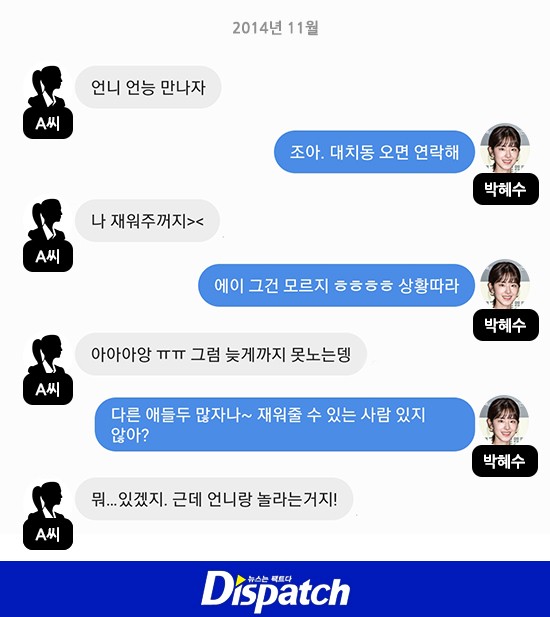 Park Hye Su: Okay. Let me know when you get to Daechi-dong.

Park Hye Su: There’s so many others that can do that for you~ Isn’t there someone who can let you stay over?

When Park Hye Su appeared on K-Pop Star 4 in late 2014, “A” continued to show her support.

“A”: I saw up to the part where you passed on the broadcast~

Park Hye Su: Ah, I didn’t tell you about the broadcast yet!!

“A”: You sing really damn well…

Park Hye Su: There are so many people who are goodㅜㅜ

“A”: That might be true, but you are also good. Don’t lose hope, do your best, and it would be nice if you could get 1st place.

Dispatch was also able to meet with classmate “K” who witnessed the alleged assault between “A” and Park Hye Su, who stated it was a simple fight that is common between middle school girls.

“A” was hit by Park Hye Su? That’s funny. They were always close, but they had a misunderstanding. On that day, they started fighting while talking to each other, but I don’t remember who grabbed whose head first. Hye Su got pushed up against a wall, hit a locker, and got a nosebleed. I took Hye Su to the nurse’s office. It’s not true that “A” was the only person hit.

“A” also sent Park Hye Su a letter for her birthday in 2011, after graduating middle school. 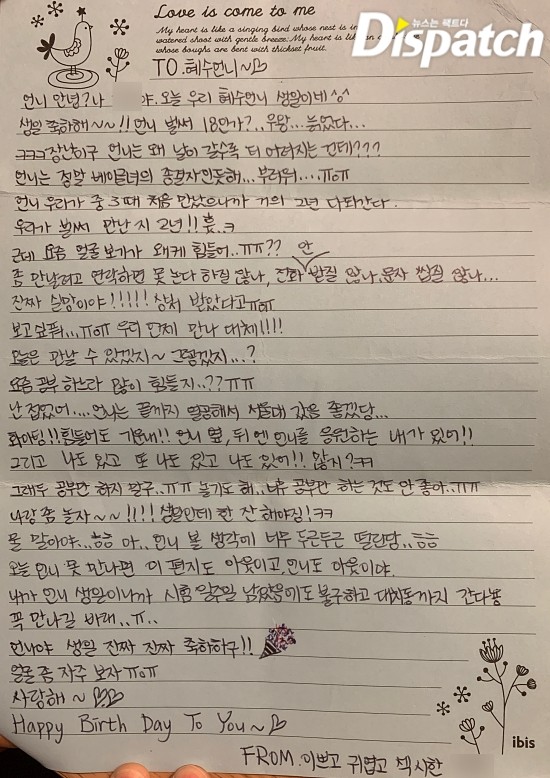 ㅋㅋㅋ I’m just joking but why as time goes by, do you look even younger???

You are the envy of all of the “bagel” girls… I’m jealous… ㅠ.ㅠ

It’s been almost 2 years since we first met in 9th grade. We’ve known each other for 2 years! Hoo… ㅋ

But why is it so hard to see your face now.. ㅍㅍ?? We can’t hang out or meet up or chat much, you don’t answer the phone, or send texts…

We can meet today~ right…?

Are you having a hard time studying these days..??ㅠㅠ

I gave up. You have to keep studying hard and get into Seoul University, that would be nice…

Fighting!! Even if it’s hard, cheer up!! I will be cheering for you from behind and from right beside you!!

But don’t just study…ㅠㅠ Play a little too.. It’s not good if you only study.. ㅠㅠ

Play with me a bit~~!!!! Since it’s your birthday, let’s have one drink!ㅋㅋ

I mean of water.. ㅎㅎ ah.. I feel so excited thinking of you.. ㅎㅎ

If I can’t see you today, this letter will be out, and you will be out too.

I’m going all the way to Daechi-dong to see you, even though my exams are in one week, I really hope I can see you.. ㅠ

I want to see your face more often ㅠ.ㅠ

Happy Birthday to you~

Unnie, I’m so proud of you. I’m watching K-Pop Star after my interview, and you’re the best, better than anyone else.

Since the post, Dispatch has tried to get in contact with “A” through private messages on social media, but has not received a response. “A” has erased all of their past social media posts.

Another person, “B”, identifying themselves as a victim of Park Hye Su’s alleged violence claimed Park Hye Su even swore at her father. Dispatch analyzed some of the text messages between “B” and Park Hye Su and did not discover any abusive language. However, text messages that could relate to the bullying at the karaoke room were not restored. A few messages sent by Park Hye Su to “B” in August 2010 were restored. 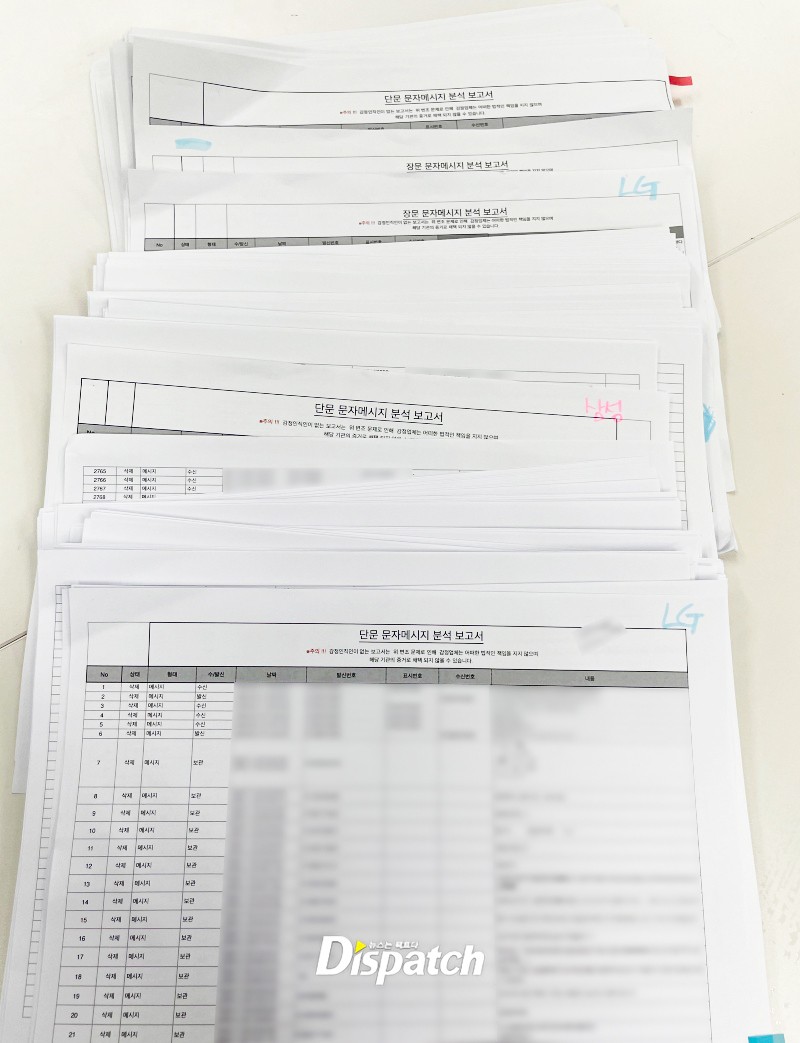 Park Hye Su: I’m going to the study room again today~ Did you talk with your grandmother?

Park Hye Su: Should I bring my 8th grade history or social studies book and go? Do you want to study together?

Park Hye Su: Ah. I have academy classes until 7:20ㅜㅜ

Park Hye Su: Then do you want to go to the study room after my academy finishes?

A minor misunderstanding could have led to the start of disagreements between “B” and Park Hye Su. 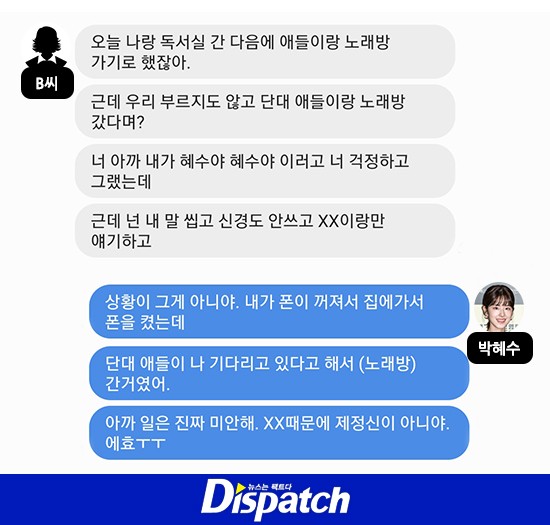 “B”: We were supposed to go to the study room, and then after go to karaoke with the other.

“B”: But you didn’t let us know, and went to karaoke with another group instead?

“B”: Just now, I was worried about you and called out your name.

“B”: But you ignored me and weren’t paying attention, and just talking to someone else instead.

Park Hye Su: That’s not what happened. My phone was off, and I turned it on when I got home.

Park Hye Su: I went to karaoke because the others were waiting for me.

Park Hye Su: I’m very sorry about what happened earlier. I wasn’t in my right mind because of XX (another student).

Dispatch pointed out that “B” did not refer to Park Hye Su as unnie, but instead called her “Hye Su-ya”. However, Dispatch also stated that it isn’t possible to conclude the type of relationship “B” and Park Hye Su had just from these messages. Dispatch has requested a second analysis on their past messages.

Based on what “B” stated in their post, claiming they were hit in front of 20 students, Dispatch went out to try and interview some of the people who were present. They were able to get in contact with four individuals who were present at the time of the alleged incident. Based on their statements, Dispatch concluded four things:

While I was eating, I got a call from Hye Su. She was so embarrassed that someone flipped over her tray on purpose while she was eating lunch. The friends who were eating lunch with me will remember, since I turned on the speakerphone and they could hear her voice.

[Hye Su] had a hard time when she first entered Daecheong Middle School. She called me a lot while crying. She was discriminated against and told she has a ‘Gangbuk-smell’. [Gangbuk is an area of northern Seoul, by the mountains]

I was the vice president of the class during 2nd semester of 7th grade. She was popular with the students. She never went through anything like this at [Jangpyeong]. She would often come up to Jangam-dong, where she originally lived, because she had a hard time adjusting to Daecheong Middle School.

In the end, Dispatch have attempted to reach out to both “A” and “B” to get their thoughts on the situation, however, neither have accepted Dispatch’s requests for an interview.