K & EJ: 10 Theories About Their Cameo In ENHYPEN’s “Drunk-Dazed” MV

ENHYPEN is back with a new music video for “Drunk-Dazed”, and it features former I-LAND contestants K and EJ.

K and EJ will soon debut in HYBE‘s first Japanese boy group, along with I-LAND‘s Nicholas, Kyungmin, and Taki.

1. K and EJ are ENHYPEN’s rivals…werewolves!

K AND EJ ARE WEARING DIFFERENT UNIFORMS. K & EJ ARE WEREWOLVES WHILE ENHYPEN ARE VAMPIRE'S. JUST LIKE RHE MOVIE TWILIGHT THEY'RE RIVALS AND ENHYPEN IS THE ONE PROTECTING THE GIRL FROM THE WEREWOLVES.#ENHYPEN #Drunk_Dazed @ENHYPEN_members pic.twitter.com/wS2p2U7uNb

2. But what if they’re not the villains?

On the other side! What if K & EJ weren't the bad guys, what if they were watching all along to protect Enha, & the part when K went to Sunoo was a stop signal to stop Sunoo at his plan? I have theories too bt I wanna keep this accnt to solely create theories for Hybe JP only https://t.co/C2clX4ABJj

Now I’m wondering, since K and EJ showed up in #Drunk_Dazed, could the girl student be one of the members from the new girl group that HYBE will debut this year? ???? I mean, she accepted the invitation ???? #ENHYPEN #BORDER_CARNIVAL pic.twitter.com/l4r2sX84kr

4. There’s a traitor among us…

SO WHAT IF SUNOO IS BETRAYING THE OTHERS BY LEADING K AND EJ TO THEM??

We kept thinking K followed Sunoo in, but it was Sunoo who made sure K followed him in, for whatever reason. he glanced at K making sure K and EJ knows where he is going, then he knew he was being followed so he smiled to himself and kept looking behind him until he showed up. pic.twitter.com/dQFVboGj3v

5. Will K and EJ’s debut tie into ENHYPEN’s universe?

K AND EJ WERE IN DRUNK-DAZED MV, MAYBE THEIR DEBUT WILL BE SOMEHOW CONNECTED TO ENHYPEN'S?!?!#)#8 pic.twitter.com/szxCJMb2h9

6. This bone-chilling The Promised Neverland theory

[THEORY]
IDK IF THIS MAKES SENSE BUT ENHYPEN MANAGED TO ESCAPE FROM THE ORPHANAGE (FARM) AND THEY FOUND THE SECRET HIDEOUT THAT MR. MINERVA BUILT FOR THEM BUT K AND EJ (THE WEREWOLVES) FOUND THEM AND STARTED A FIGHT THAT CAUSES THE BLOODY PARTY++ pic.twitter.com/971PPzqyfT 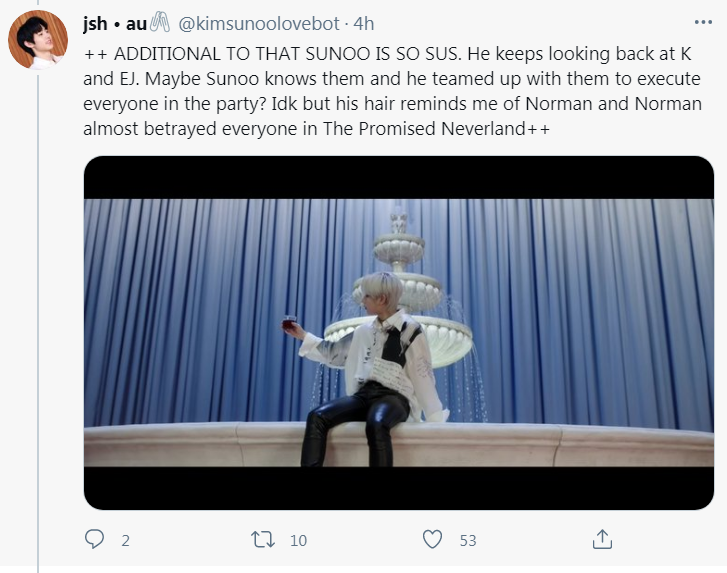 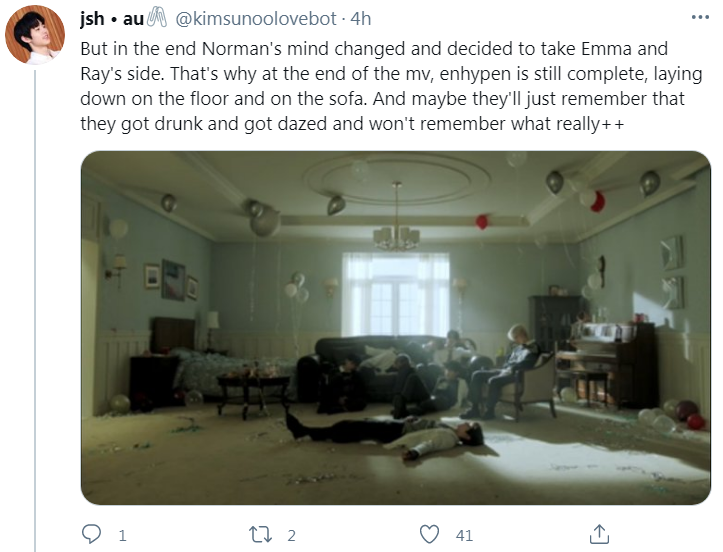 7. Hinting at the debut date?

OH SHOOT! I JUST REALIZED NOW! ???? SO WE HAD A THEORY LAST FEB ABOUT HYBE JP BOYS MAY 26 DEBUT! AND THE MV IN WHICH K AND EJ APPEARED GOT RELEASED IN APRIL 26 WHICH IS JUST A MONTH APART!

What if all ENHYPEN protects Sunoo from EJ and K (aka werewolves)? See for yourself. When EJ and K come to the party, they watches Sunoo all the time, watching what he’s doing.

9. Yeah, we should probably talk about this…

So ???? are we going to talk about how they fed on and murdered the entire party? Or… #ENHYPEN #ENHYPEN_COMEBACK_DAY #Drunk_Dazed #DRUNKDAZED pic.twitter.com/GYxC3Skur5

10. Who else is lurking in the shadows?

So K & EJ are werewolves (K possibly being the alpha as his shadow was much bigger) but also if you look carefully at some of the party scenes I was able to see a couple more boys with grey matching uniforms and maybe a couple of them are the new members!? THEORIES?#Drunk_Dazed pic.twitter.com/gzoiRAbE0l