Epik High Lyrics That Will Hit Home With Every Listen

From their very first song, Epik High has been a purveyor of lyrics that have led movements, moved hearts, and given a voice to our deepest emotions that we never knew had words. Fourteen years later, the group still stands at the top of the hip hop world in Korea, despite numerous setbacks and trials, and is always ready to expand their reach and support in the music industry. When “Epik High” appears next to the term “music,” fans can always expect something amazing and moving.

Plenty of fans had reason to celebrate when Tablo announced in July that he was stepping down from his management position at the YG sub-label HIGHGRND to focus on Epik High’s next album.

Epik High’s golden combination of Tablo, Mithra Jin, and DJ Tukutz has never failed to deliver albums with messages that ask listeners to not only reflect on themselves and their relationships, but to also consider the world around them, be it politics, society, or technology. They pretty much always hit us in the feels, and deliver a good shock to the heart just when you thought you’d heard it all before in a song. That’s the magic of Epik High.

So while we wring our hands and anxiously await for Epik High to grace our brains and ears with another riveting album experience, let’s look back on some of the moments in Epik High’s discography (in no particular order) that solidified them as word-wizards in the first place. 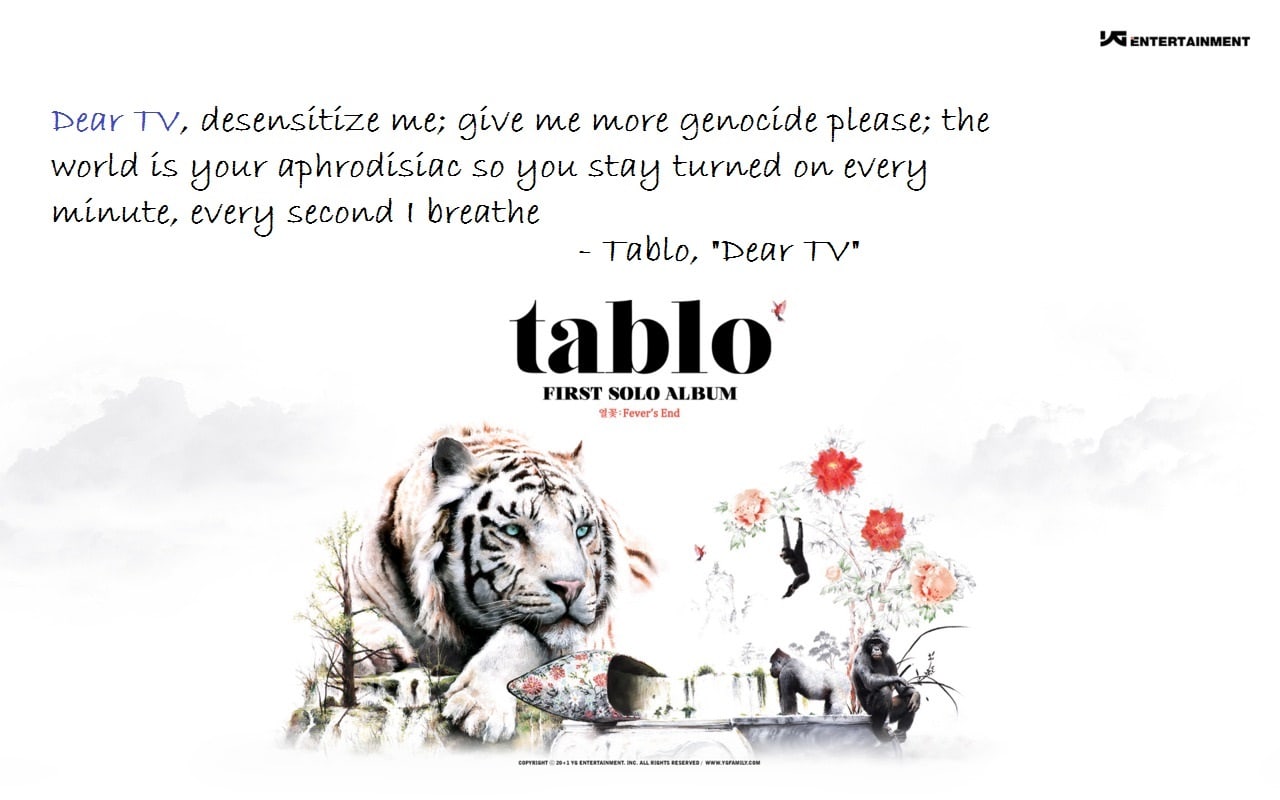 When Tablo dropped his solo album “Fever’s End,” listeners expected stories about his experiences as the target of a hate group that accused him of lying about his educational background. The controversy affected not only him but his wife; his family eventually moved to America, seemingly to wait out the storm. The event was a harsh reminder of the power of netizens over an artist’s career and personal life.

But rather than an album full of trials, Tablo shared stories about his life experiences and songs meant to help and heal other people who heard them. The album also included the short, English gem, “Dear TV,” written as an open letter to television and media about its power and effects on viewers in a poignant piece of social criticism. The entire album was literary magic. 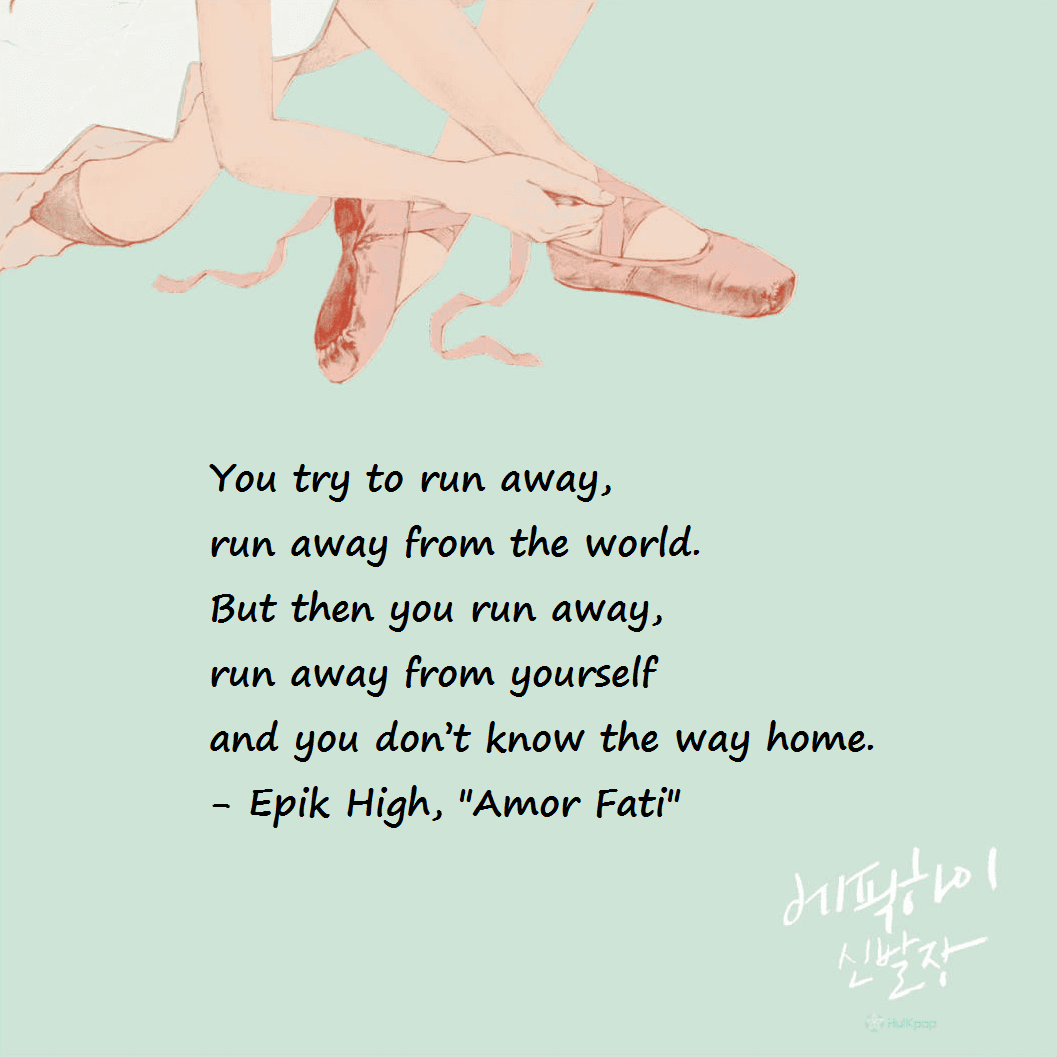 The phrase Amor Fati comes from Latin and is commonly translated as “love one’s fate.” It’s essentially the belief that everything you suffer is for a good purpose, and Epik High aptly used the phrase for the title of a song about suffering and losing your way, albeit the song never actually says suffering is all that great. Perhaps that’s the point? 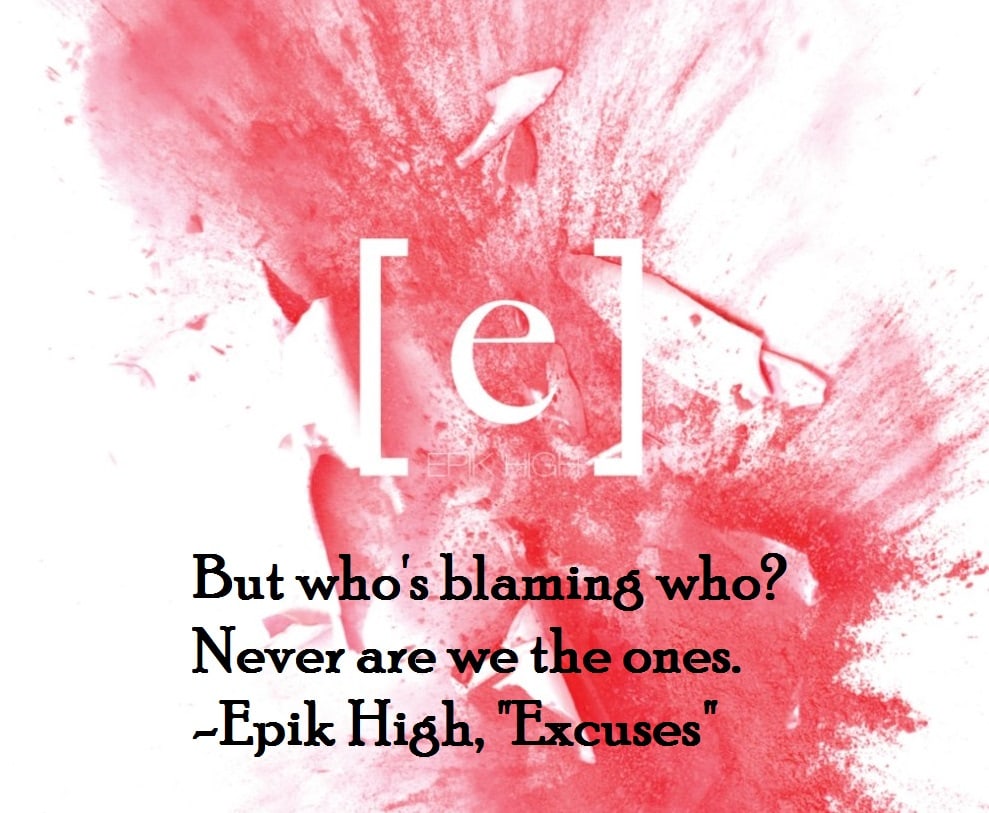 If you ever need to listen to lyrics about how the world ruins everything, this is the song. But the members ask: do things around us fall apart because of outside influences, or perhaps, are we also part of the problem? There are almost always two sides to Epik High lyrics. 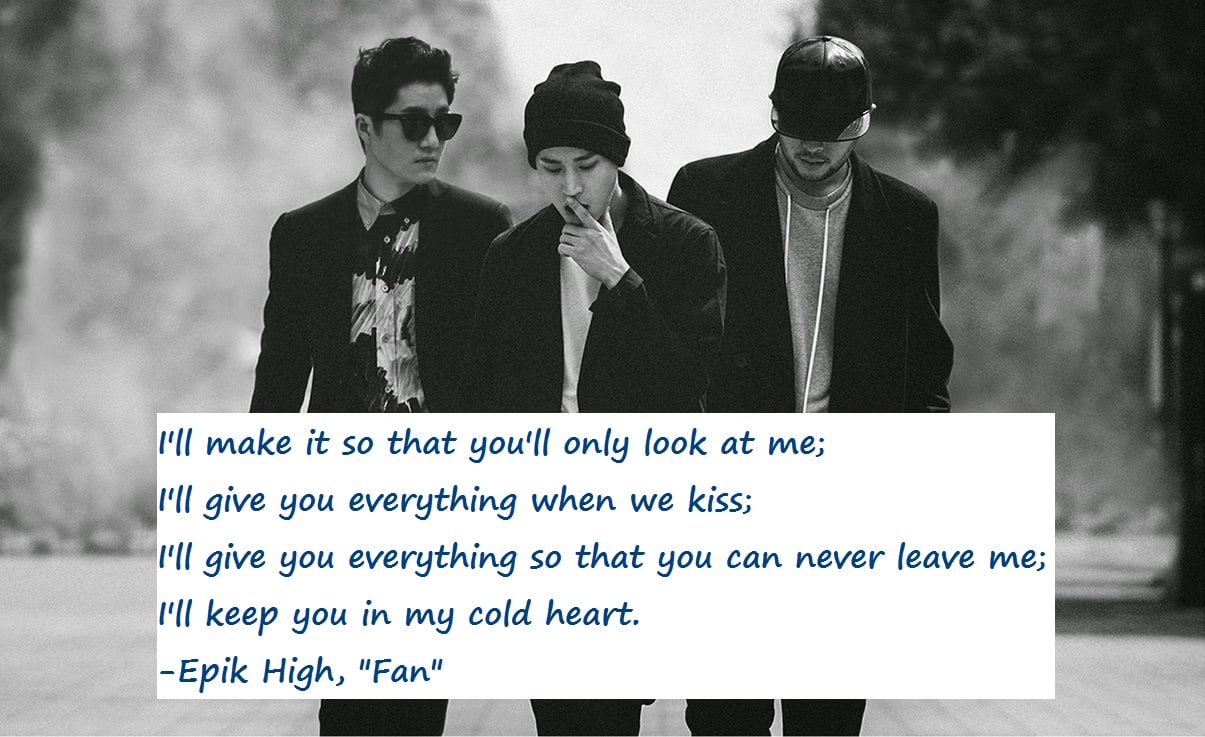 If you’ve ever seen the music video for “Fan,” you know that the visual story accompanying the track is chilling. While some people associate the song with stalkers and sasaengs of idols in Korea, the lyrics can also speak to someone who is desperate to be loved and noticed. However you view it, though, the lyrics are a grim reminder that “love” isn’t always a rosy feeling or filled with the best intentions. 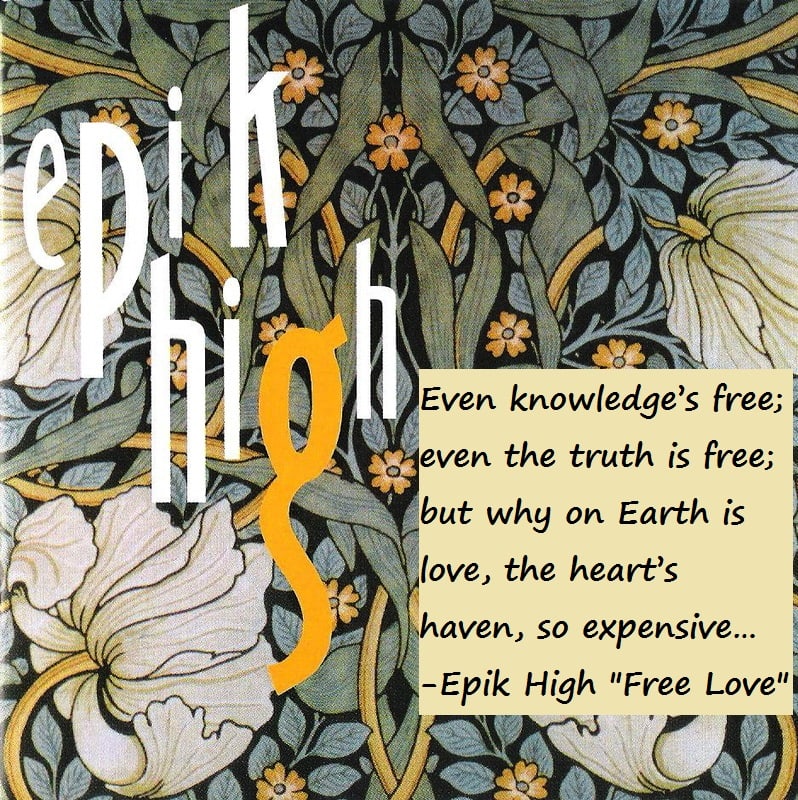 Epik High can bust out some amazing verses about hip hop and their experiences in the industry, but they’re also amazing at expressing how hard it can be to navigate the perplexities of the heart. “Free Love” is filled with plenty of angst and frustration; are you someone who thinks love is free or too expensive?

“Happy Birthday To Me” 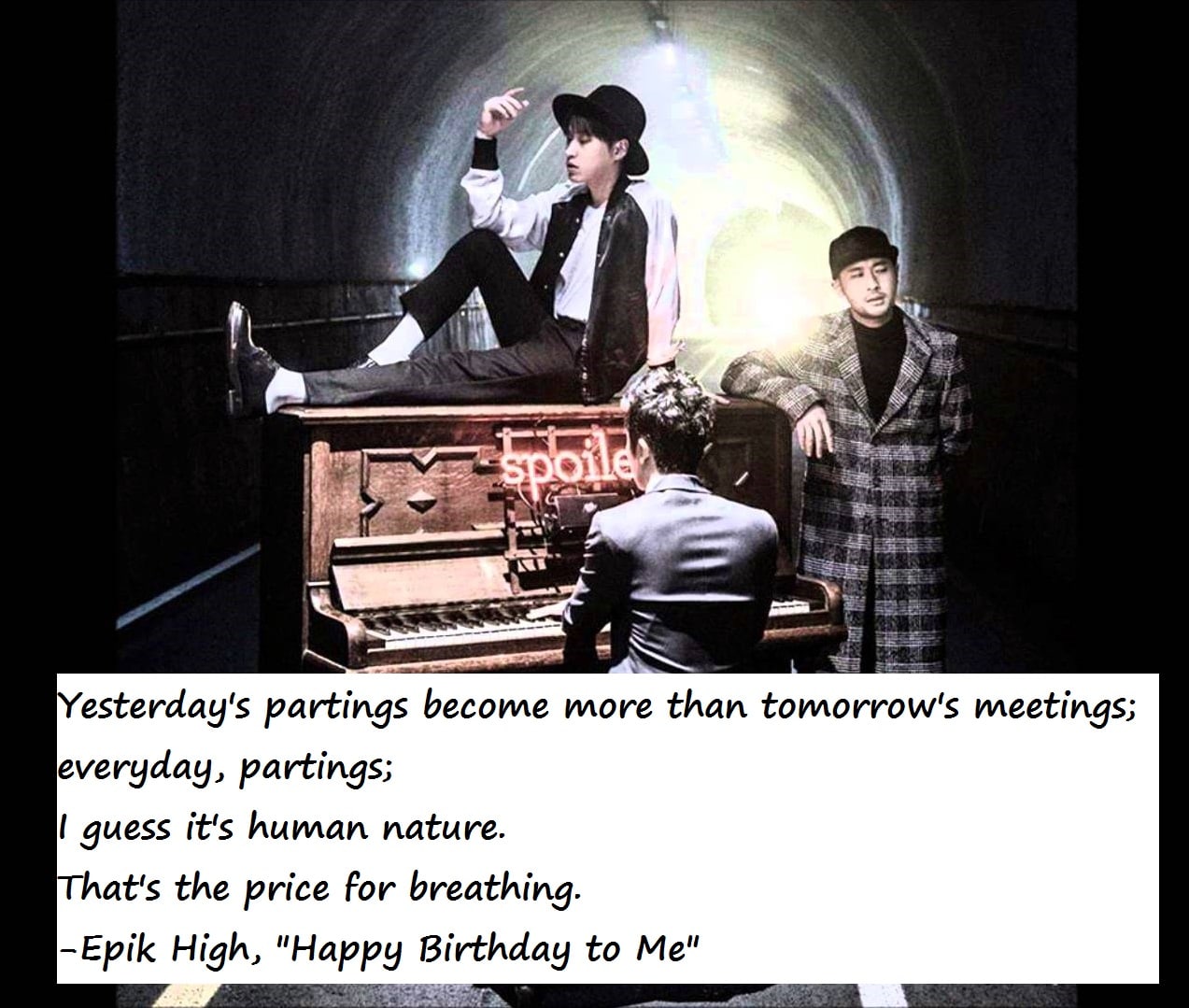 When listening to “Happy Birthday to Me,” it’s easy to imagine a man in a bar drinking and lamenting to the bartender, “Life is grand – not; but it could always suck worse.” Another year passes, and sometimes it’s not always an easy one. Epik High understands. 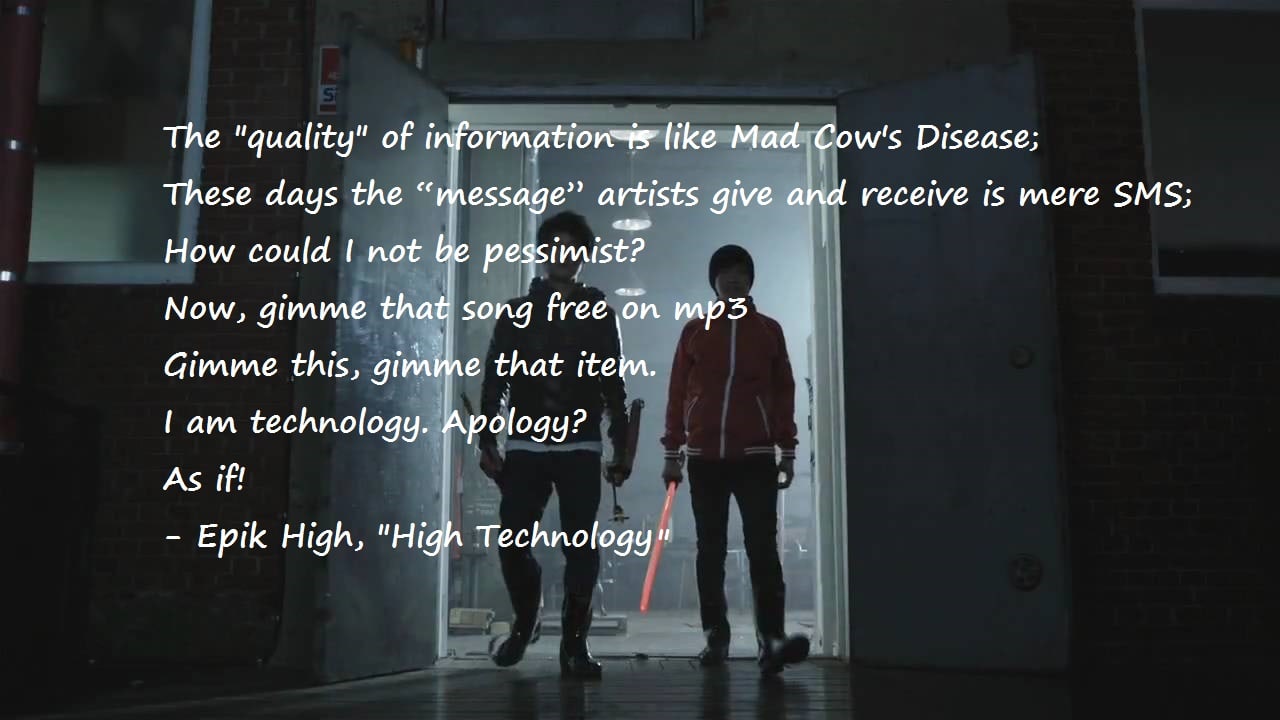 The quote above is meant to end in a lot shouting and jumping with your fist pumping high. Epik High isn’t shy about being critical of administrations, businesses, society… or in this case, technology. Making the claim that Epik High’s “High Technology” is legendary probably wouldn’t be too far of a stretch… but not only is the song fantastic, the music video is also part of a short series that’s hilarious and epic in its own right. 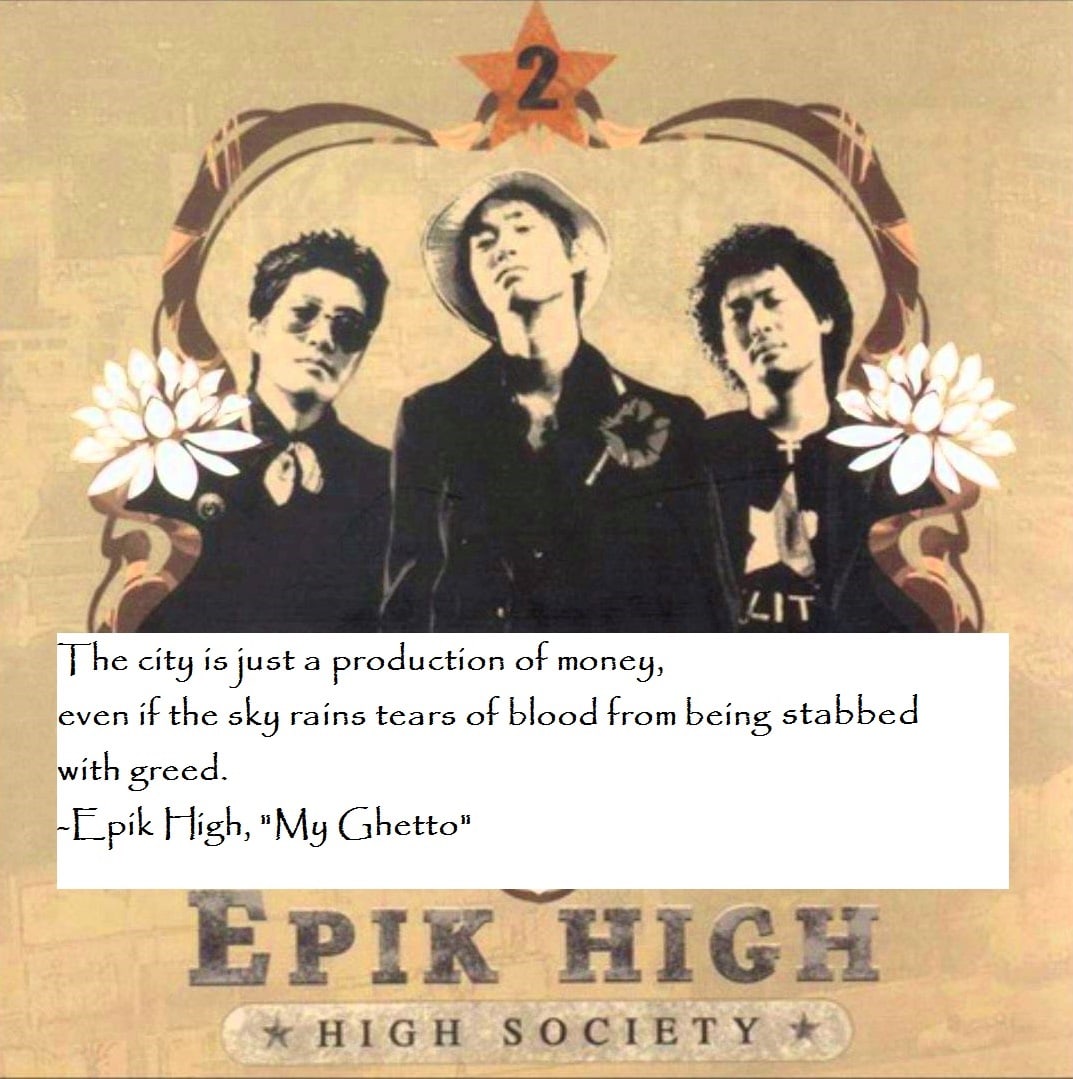 Speaking of songs that are critical of things such as society and corporations, here is a quote from “My Ghetto,” a song dedicated to talking about the corruption and struggle in Seoul. Many of the lyrics in this song, however, don’t just apply to Seoul, but can also be applicable or describe experiences in cities around the world. 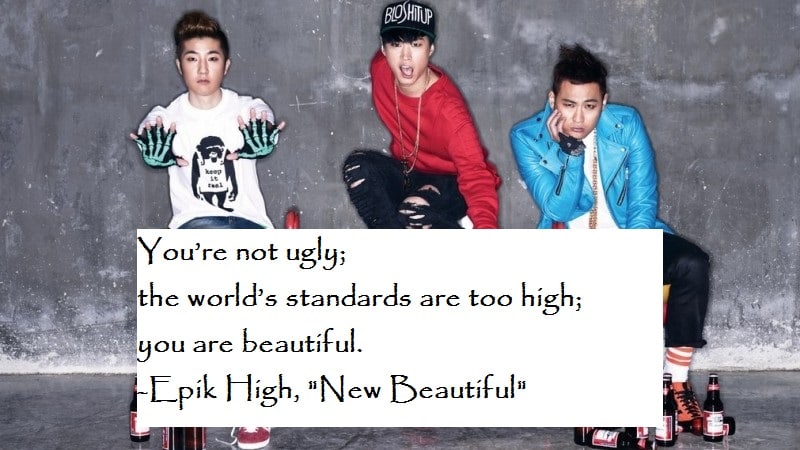 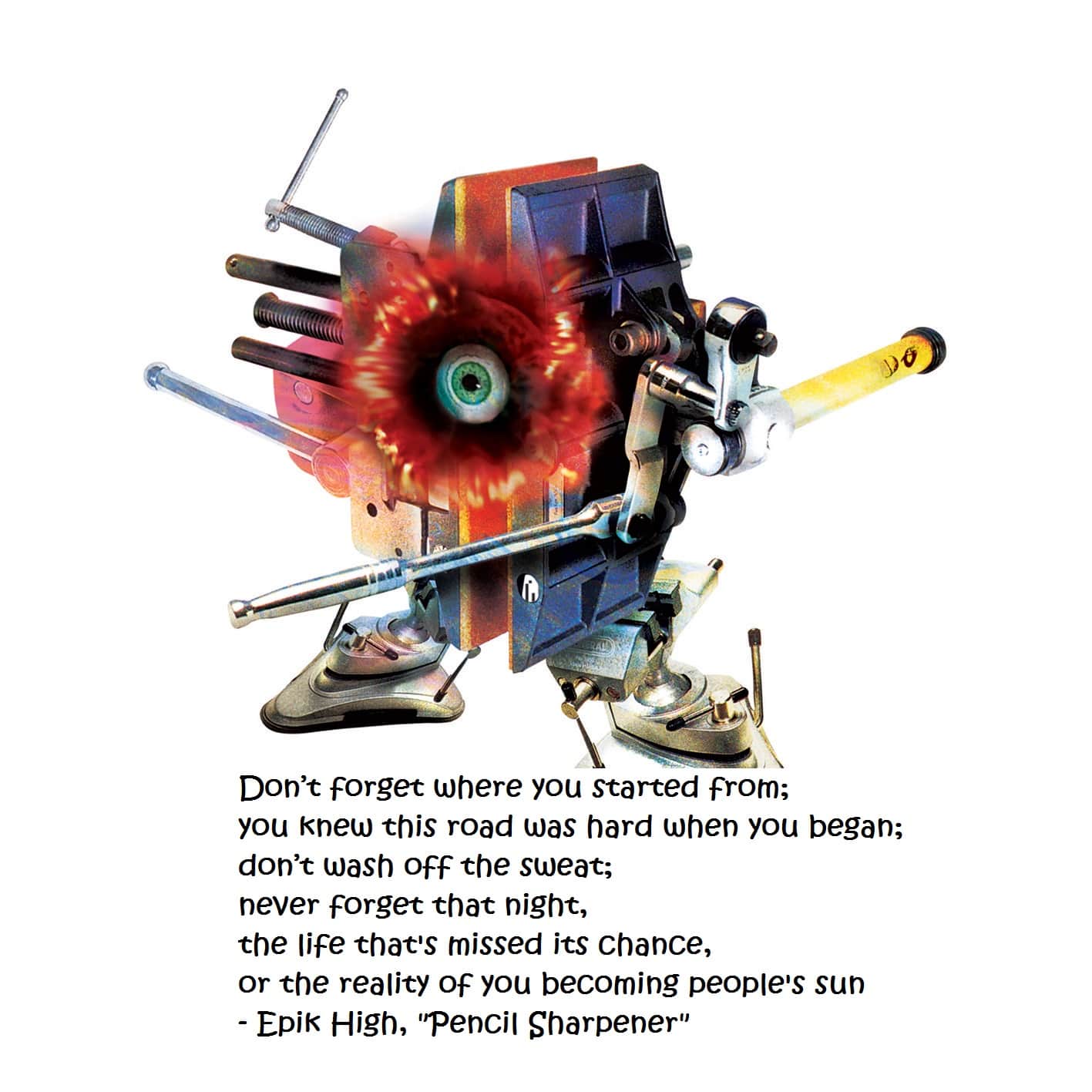 Several songs in Epik High’s arsenal have been about their own experiences and journey as they struggled to gain fame and recognition. “Pencil Sharpener” is one such song, but many of the lyrics speak to the broader idea of struggling for one’s dreams. However, many K-pop fans can read the passage above and feel reminded of the trials faced by their favorite idols and artists as they work hard to rise through the entertainment industry, just as Epik High did. 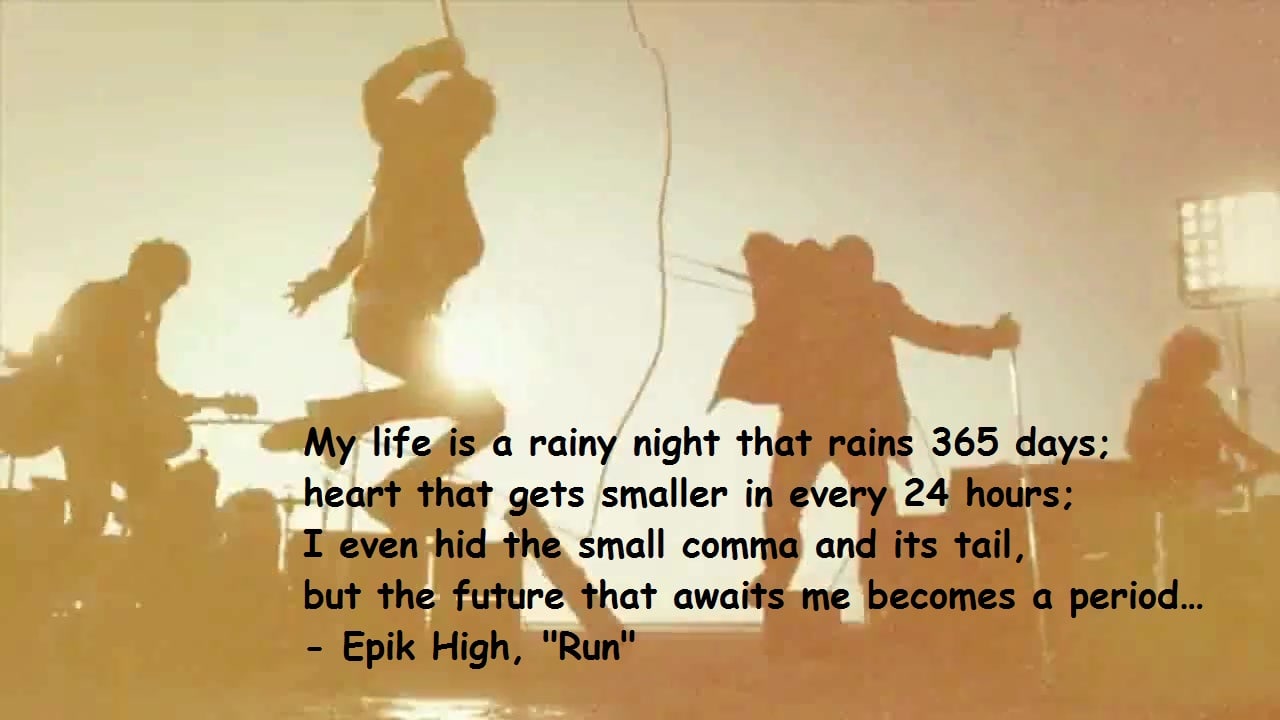 You run and run; the future’s unsure; everything is dark and got you running away. But run until your dreams are in your hands. There’s your Epik High motivational speech about pushing ahead. 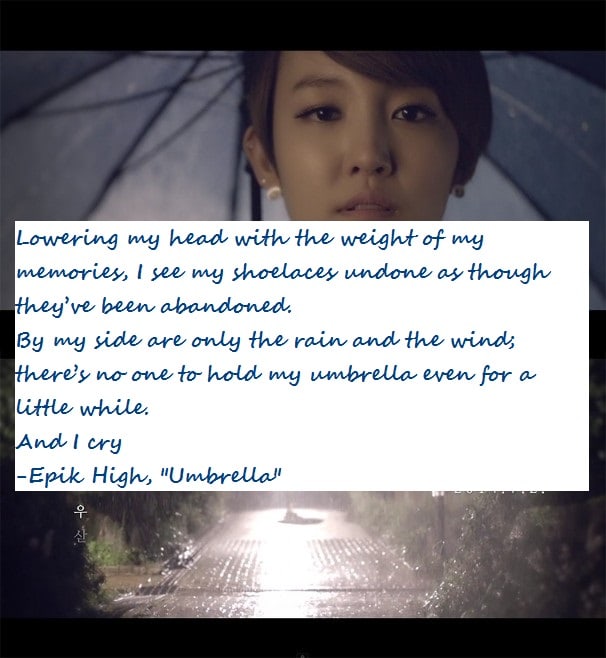 Years have passed, but featuring artist Younha still performs this song, sometimes even with Epik High at their concerts. Not only did it have a profound affect on the artists, but “Umbrella” is a song that speaks to anyone who’s been through a break up or loss and understands the mournful feeling of having someone beside you suddenly disappear. All of this is portrayed through a metaphorical experience of using an umbrella. Sometimes it only takes one item to dredge up a lot of memories and emotions. 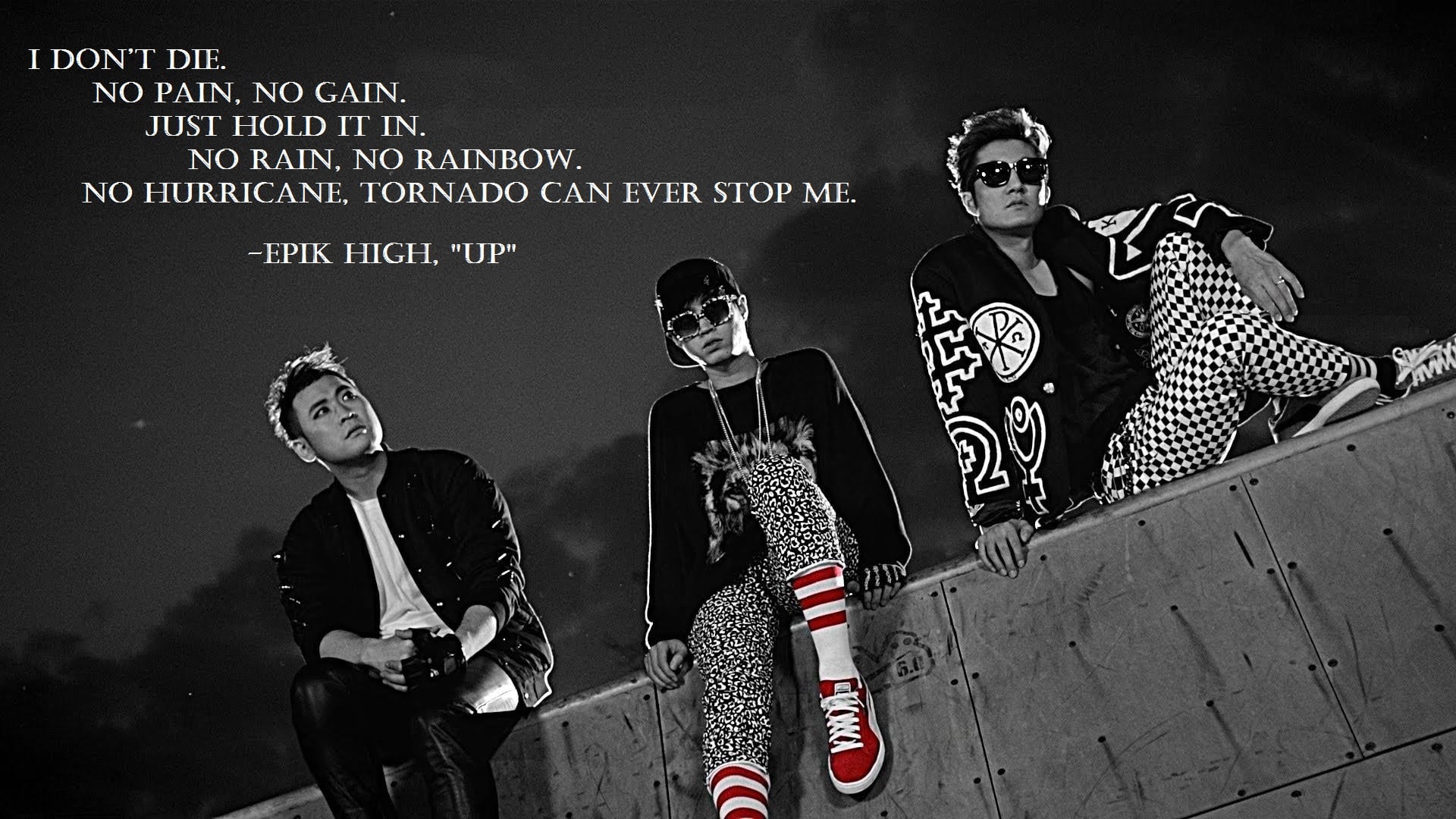 Epik High isn’t a group that stays down. They get up again and come back swinging; they’re not just about reaching the top, but motivating others too. If you’re not feeling the motivation, you haven’t been listening. 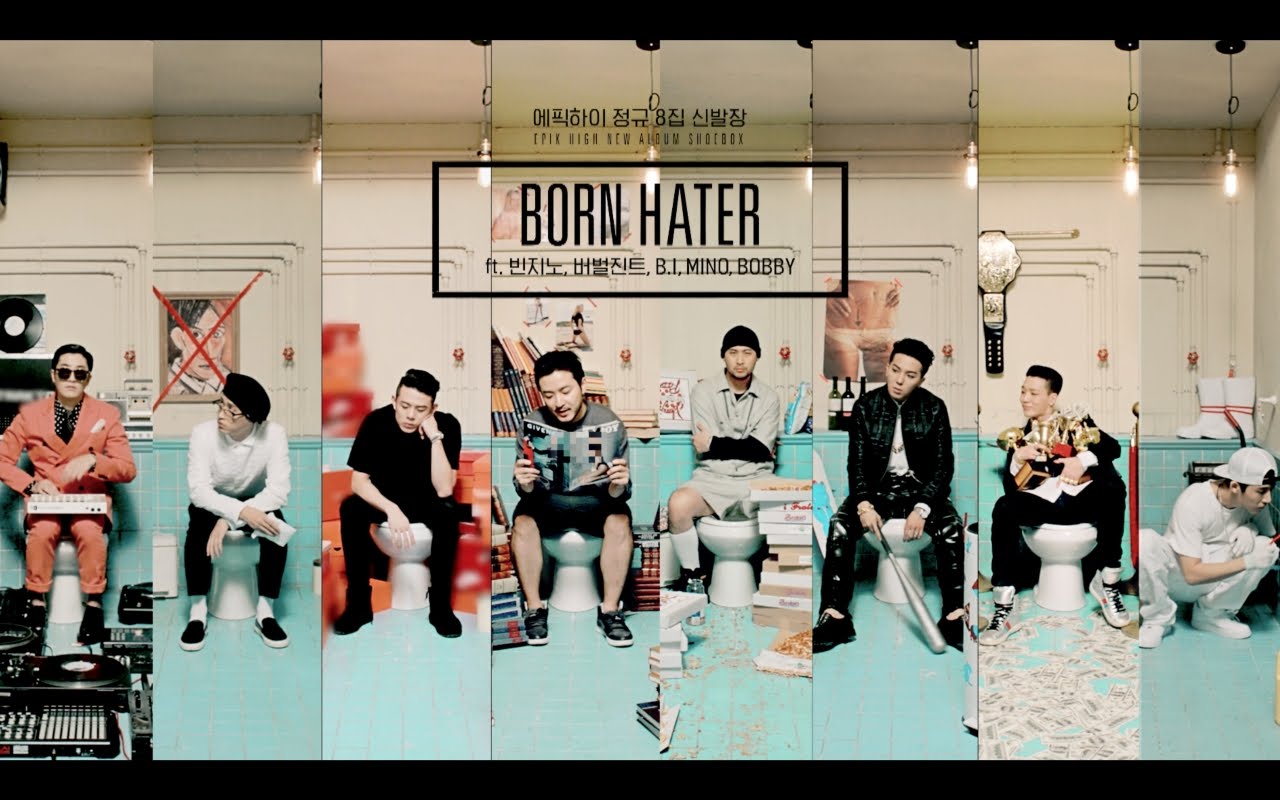 This entire song is quote-worthy. It’s not very often that an epic collaboration with so many artists happens like this in Korean hip hop, and hopefully something this amazing will happen again in the near future.

Music and lyrics often have the power to affect us or even impact our lives, and Epik High has always been a group that tries to make this happen.

What songs or lyrics by Epik High have impacted you or stayed with you over the years? What are you looking forward to most from their upcoming album? Let us know in the comments below!

heytoto currently lives in South Korea and can usually be found sipping a latte while anxiously waiting for Tablo’s next magical production.