Sam Hammington and his sons William and Bentley visited the KBS broadcasting station on KBS 2TV’s “The Return of Superman.”

On the May 13 episode, Sam Hammington brought his kids to the studio where he had to film a TV show. They walked by a meeting room where they spotted Eric Nam. The singer smiled as soon as he saw them and came to greet the father-son trio.

He said, “They’re so cute. So cute!” and played with William, who acted shy in front of the singer. Eric Nam asked William how old he was and he shyly held up two fingers. He also commented on Bentley’s bright smile and held him.

William then asked for water and Eric Nam offered to take him. They walked to the vending machine together and William chose three cans for himself, his dad, and Eric Nam. The singer tended to William by slowly feeding him the drink and wiping the juice from his chin using his sleeve. 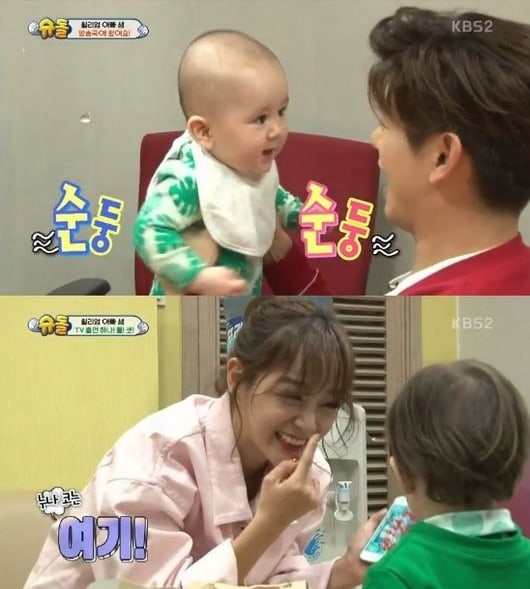 Sam Hammington and his sons then ran into gugudan’s Kim Sejeong who just finished filming for a different TV show.

She agreed to babysit the boys in the dressing room while their dad worked. She played gugudan’s “Chococo” and I.O.I’s “Pick Me” for William and he danced along to the songs. He, however, surprised her when he said he wanted to listen to “Chococo” instead.

Kim Sejeong said, “A day when ‘Chococo’ beats ‘Pick Me.’ Thanks William! [The members] will be delighted!” When William left to film with his dad, she held Bentley in her arms and fed him his bottle. She lovingly looked at him and fell in love with his cuteness.