Eric Nam appeared on the December 13 episode of “Radio Star” and shared which Hollywood star he is grateful to out of all the ones he interviewed.

The singer used to be a reporter on “Section TV” and interviewed Hollywood celebrities with his fluent English and interview skills. Due to those reasons, not only did he interview Hollywood stars but Korean ones as well. He confessed he had a hard time back then interviewing Korean stars due to his lack of skills in the Korean language.

When asked which star he was most grateful to, Eric Nam replied, “I was the most thankful to Jamie Foxx.” During that time, Eric Nam had been grasping for straws due to the lack of interview time with Emma Stone and Andrew Garfield during the “Amazing Spider-Man 2” promotional interviews. It was then that Jamie Foxx came to the rescue with his friendly answers. The Hollywood star even sang Eric Nam’s song with him and promoted Eric Nam on his own social media account. 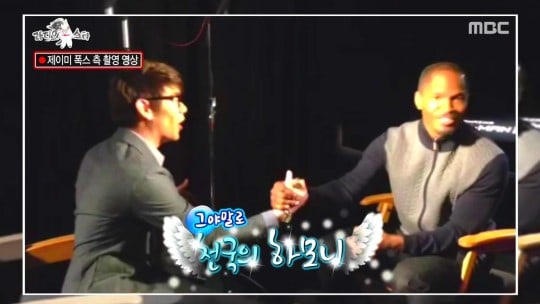 Eric Nam also mentioned his friendship with American actress and model Chloe Moretz. He said his younger brother who lives in LA was even invited to her Christmas party.

On another note, Eric Nam recently sang an OST for the drama “Prison Playbook.”