On February 20, SF9 signaled their return with a showcase for their sixth mini album “Narcissus”!

SF9’s new album “Narcissus” conveys the message of loving ourselves as we are. In line with the theme of self-love, the lyrics of their title song “Enough” say, “Don’t get prettier, you’re pretty enough now.”

The showcase began with a performance of “Enough,” which was preceded by an elegant intro dance performance by Taeyang and Chani. The two moved like reflections on a mirror, highlighting the “mirror” theme of the album. 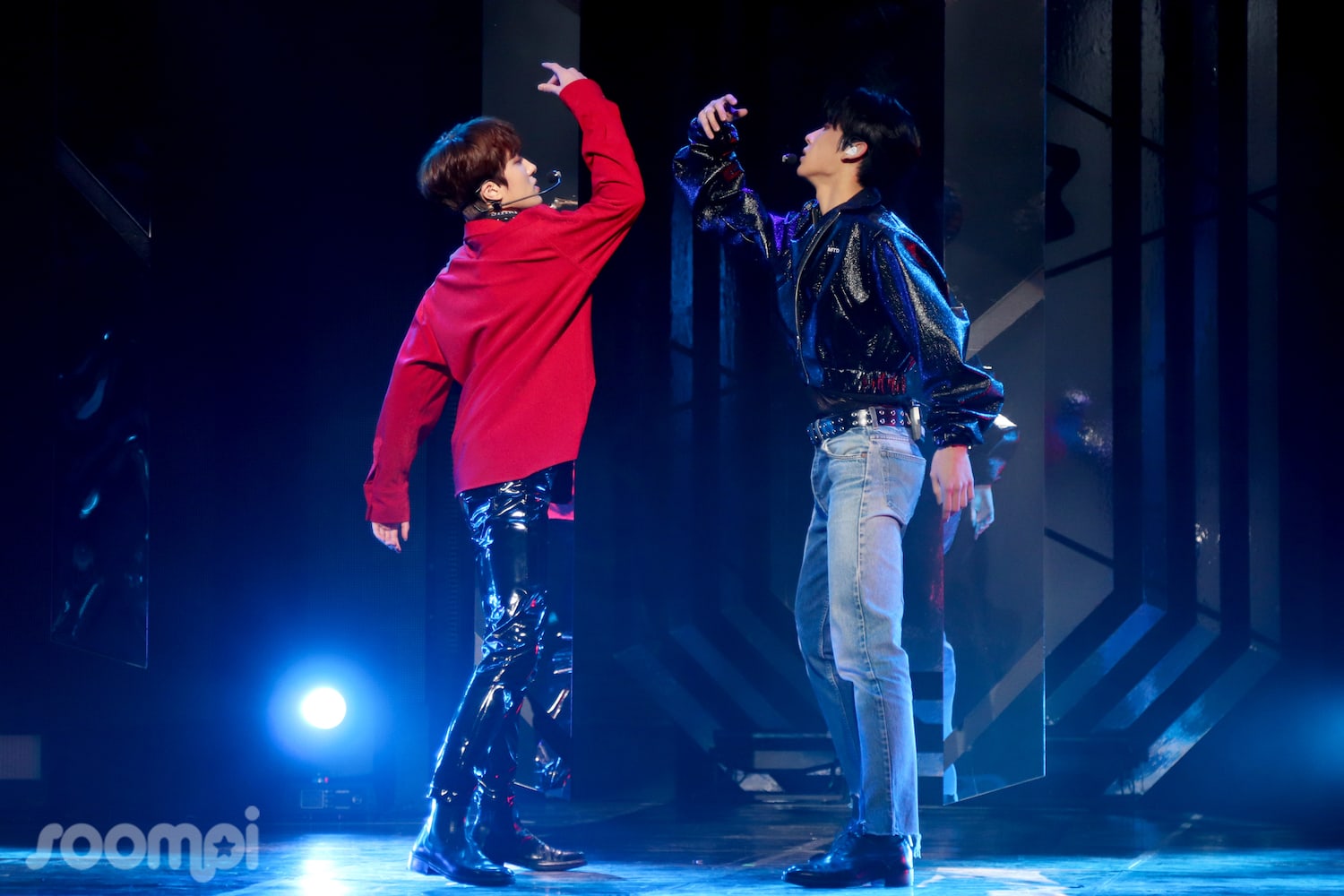 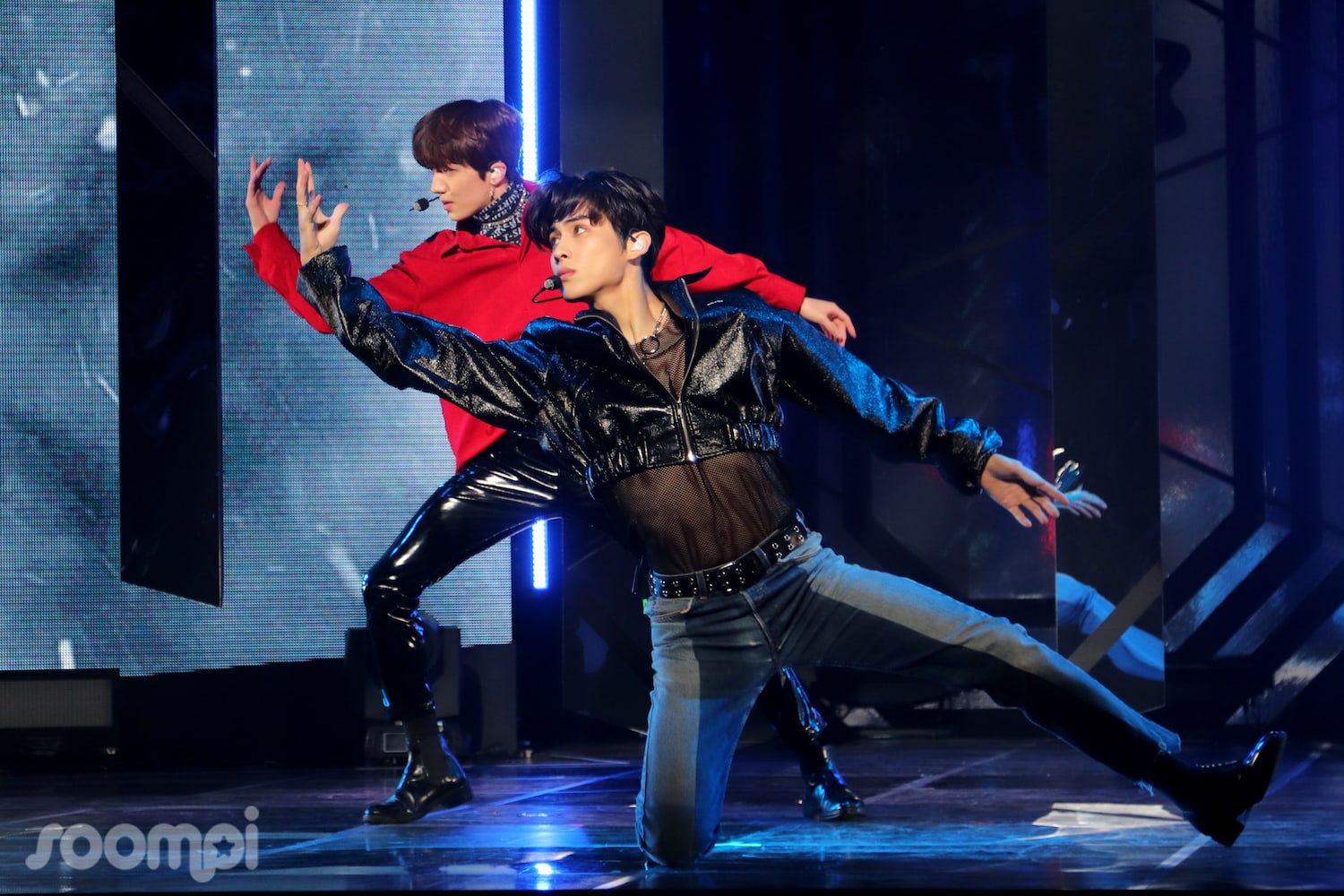 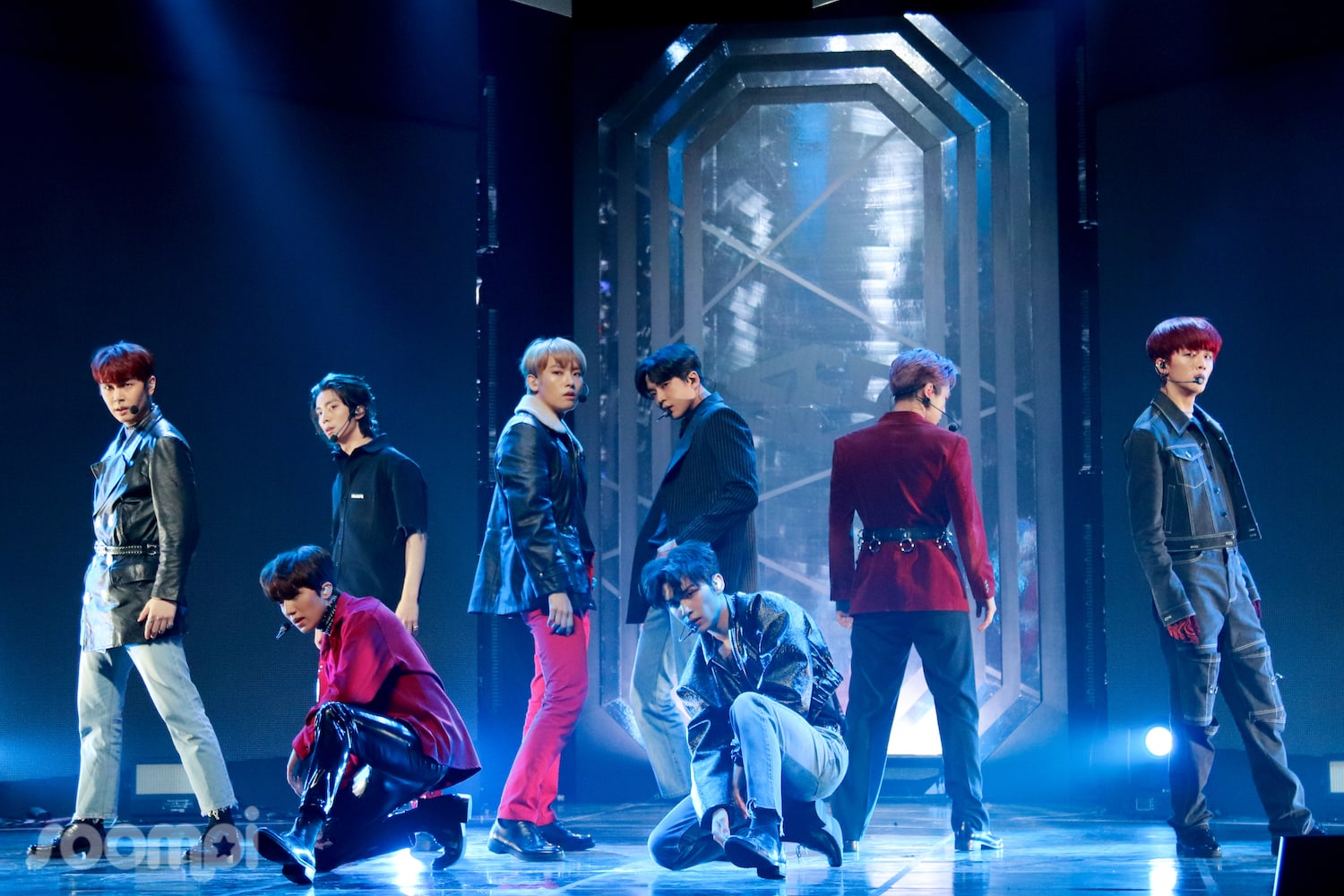 After the powerful and sensual performance of “Enough,” Youngbin introduced the track, describing it as a 21st century reinterpretation of the Greek mythology figure Narcissus. He explained that it has a more mature and artistic sexy vibe that’s different from their previous title song “Now or Never.”

Chani has recently been under the spotlight for his appearance as Hwang Woo Joo in JTBC’s popular drama “SKY Castle.” Asked about having to join SF9 for their comeback right after busily filming for the drama, Chani said, “I’m thankful for the interest in ‘SKY Castle.’ I’m immediately returning to group promotions because I wanted to show myself to the masses again. I feel like these are things I can’t do if I don’t do them now,” adding, “The other members waited for me to finish filming and stayed at the practice room without going home. I’m thankful for that.” 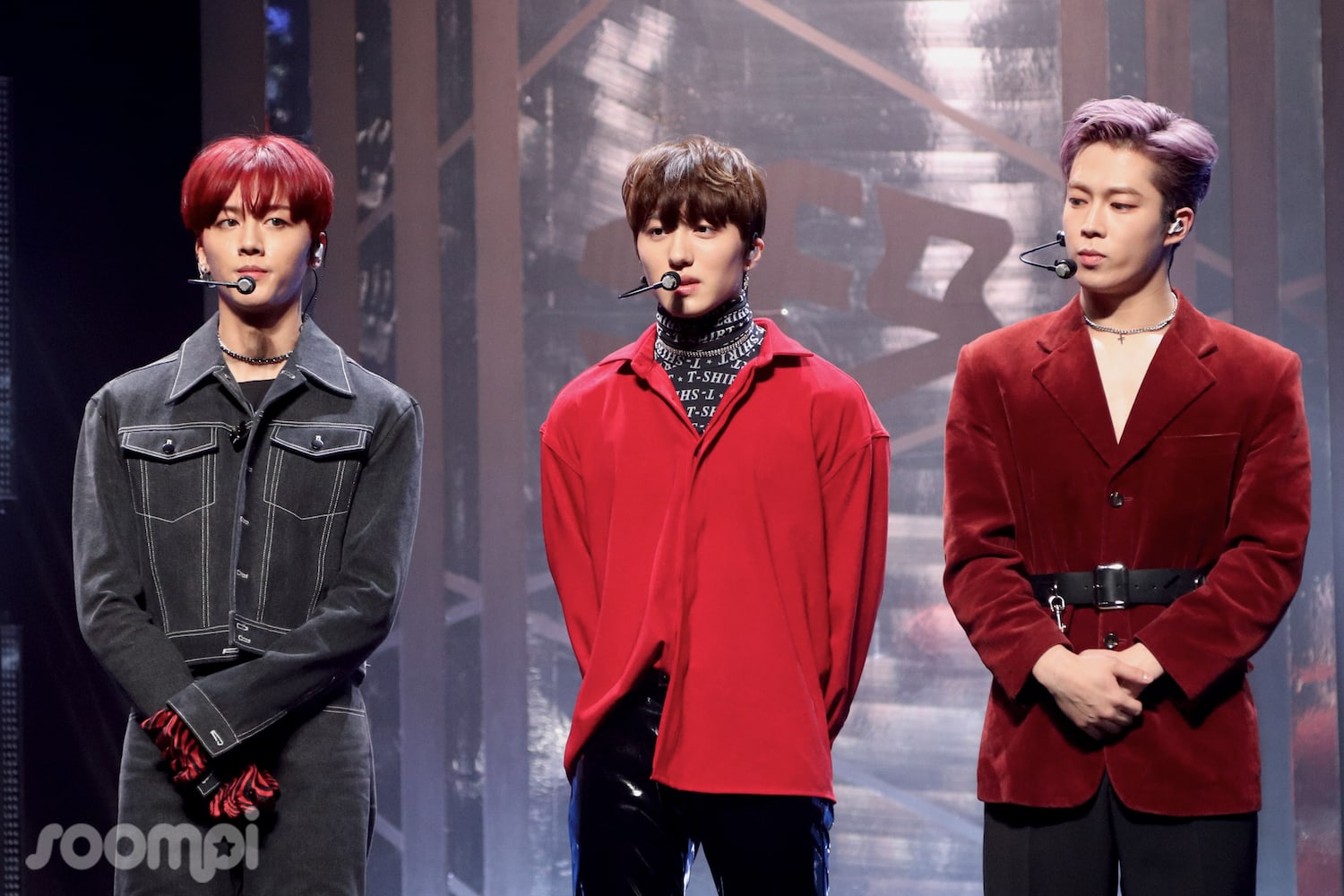 Rowoon shared, “Chani is very good at dancing. He was able to quickly join the album preparations because he’s a fast learner,” and Inseong added, “He learned the dance even faster than I did when I had a month to learn it.”

SF9 then got ready to perform their next song “Play Hard,” which they described as “a song they can enjoy together with FANTASY (SF9’s fan club).” As its name suggests, the song has an exciting, booming beat that immediately warps the listener to a club. 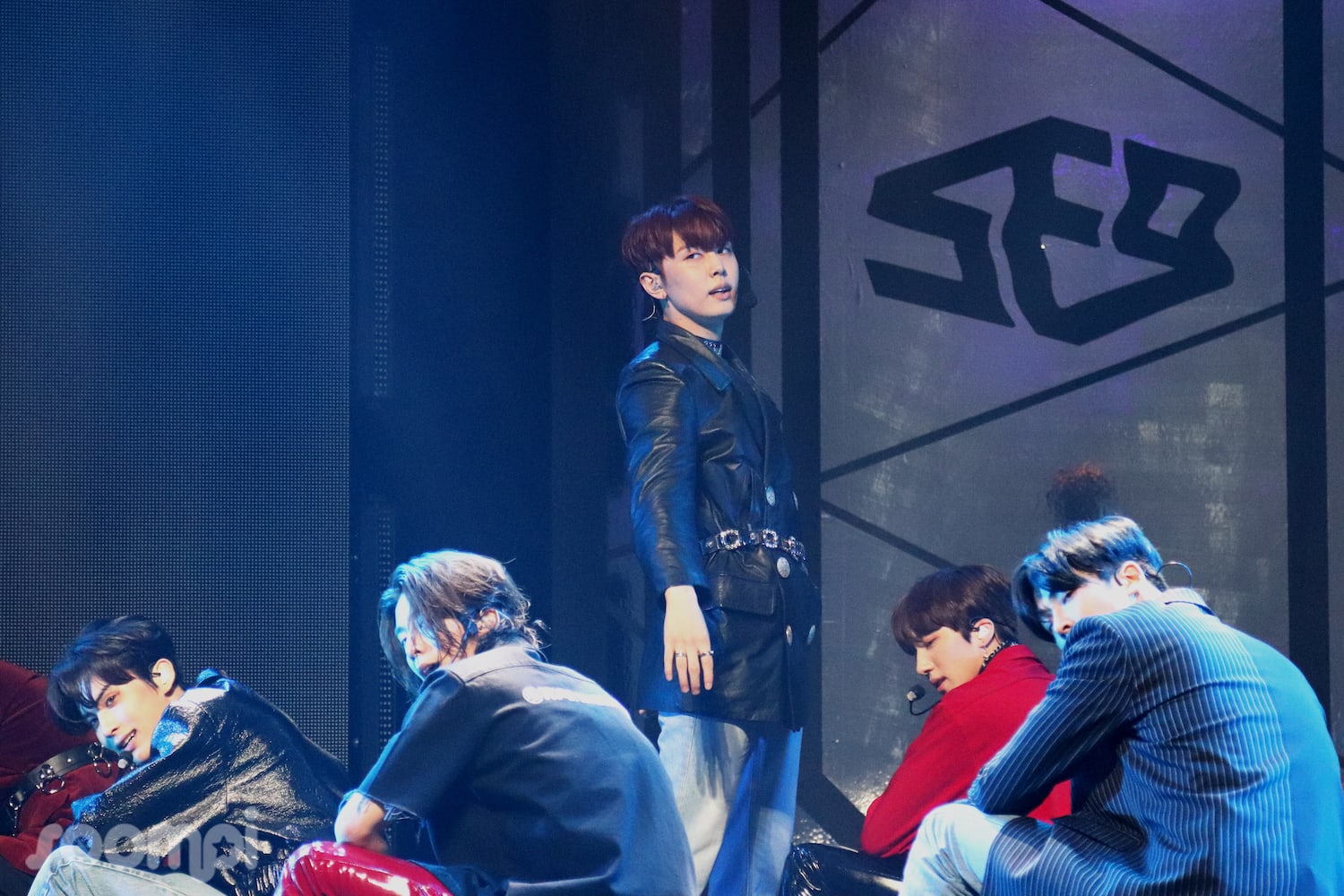 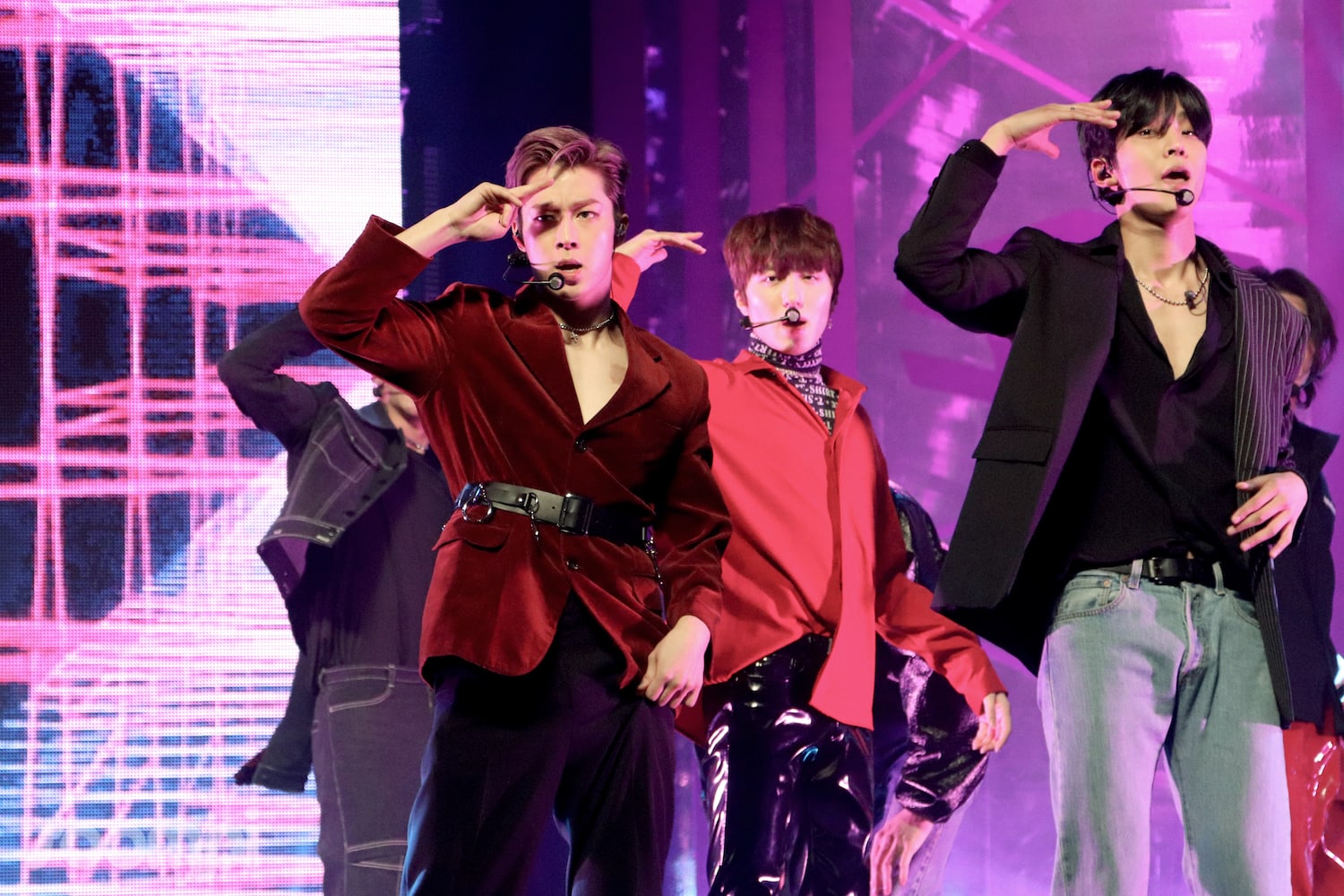 Following the performance, the members stood in a line for group photos. In response to a request for them to pose like they are in love with themselves like Narcissus, they all put their arms around themselves in the same way. 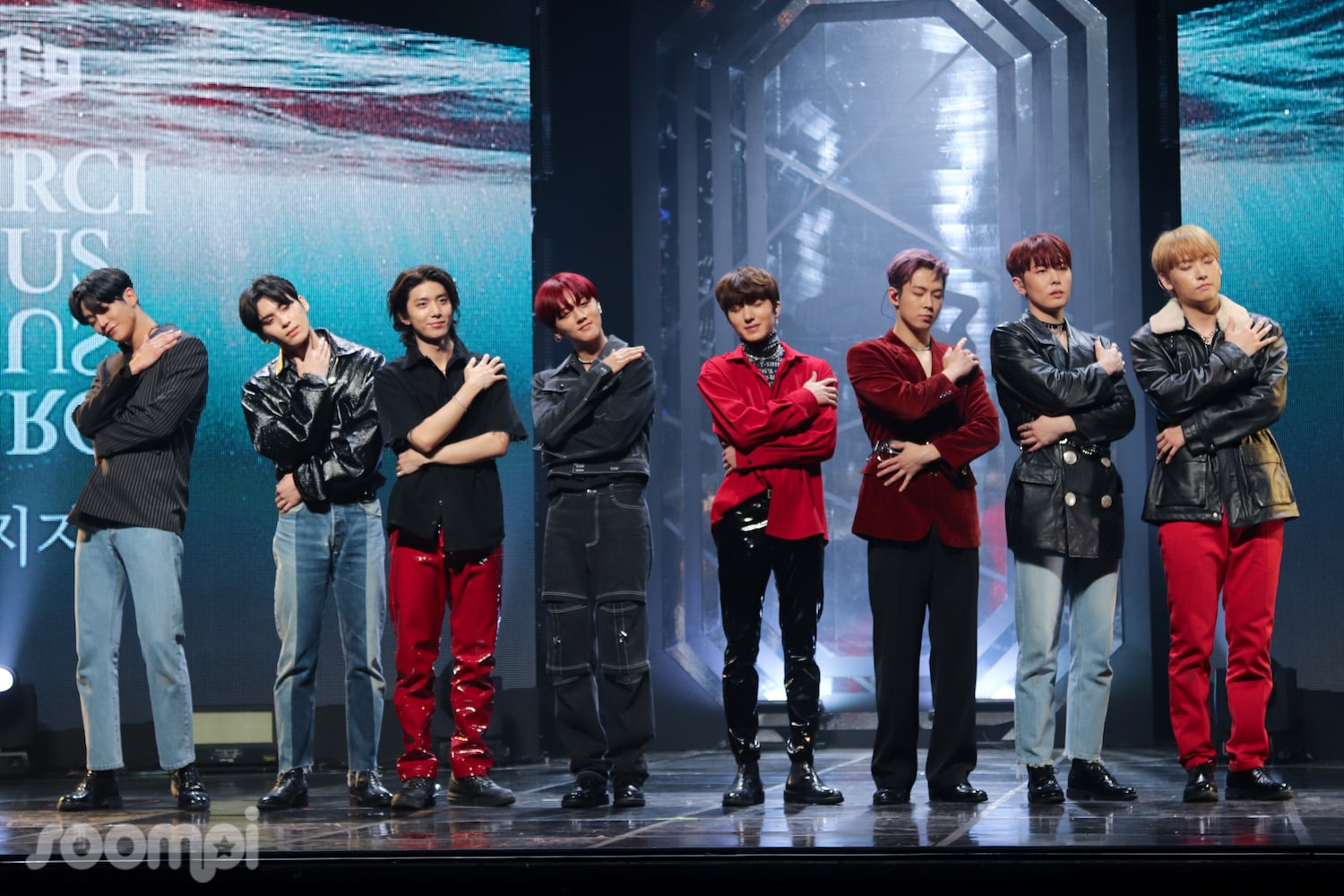 The group then sat down for a Q&A session. The host talked about their recent successes including being named as Billboard’s “2019 K-pop Breakout Pick” and having their older music videos suddenly accumulate an incredible number of views. Asked if they could truly feel that they had gotten more fans, Jaeyoon responded, “I don’t feel it directly, but when we go perform overseas, I like that there are more fans each time. I’m thankful that people are becoming more interested in us after Chani and Rowooon’s drama appearances.”

Inseong stated, “We’re thankful for the attention, but we’re sad that Zuho couldn’t promote with us. He took part in the album though, so please support us.” Zuho had previously announced that he would not be participating in the promotions this time due to a back injury. 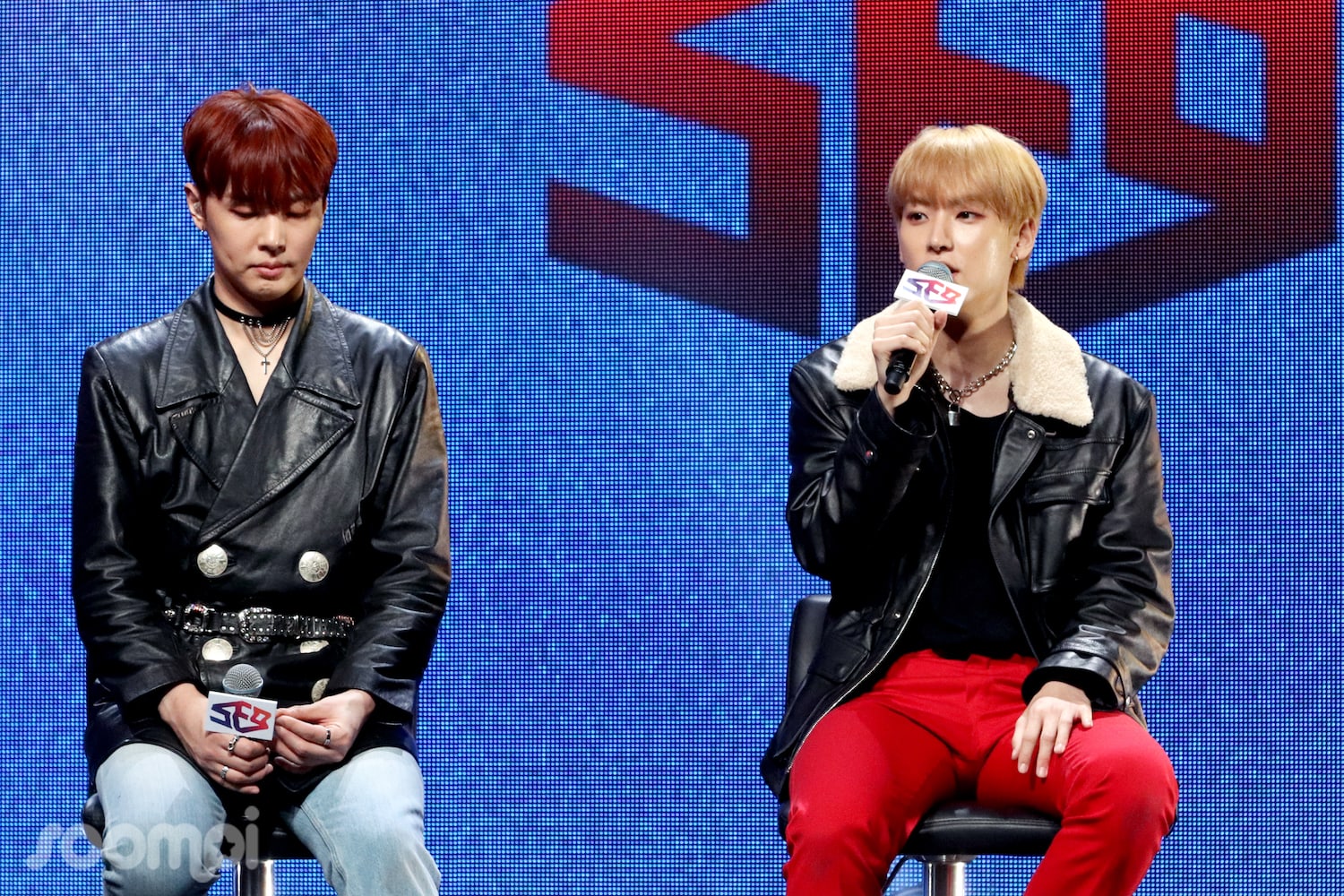 They moved on to talk about the eye-catching section in the choreography of “Enough” that represents the way Narcissus bends down to see his own reflection, and Taeyang, Chani, and Youngbin got up to perform the dance again. Dawon said, “Our fans were worried about our knees, but we’re being careful,” and told fans, “Don’t worry.” Chani explained, “Practicing the choreography was hard and awkward at first. We had to touch the ground, and for about two days, we had bruises on our knees. Now, we have the know-how, so it doesn’t hurt even if we do it 100 times.”

Youngbin then commented, “Taeyang feels like a hyung when I watch him teach Hwiyoung the choreography.” In relation to this, Hwiyoung said, “It was hard because the choreography was unlike anything I had done before, but Taeyang and Chani helped me a lot. There are people who are just naturally good at things, and Taeyang’s like that. He shows me the move and says, ‘You have to do it like this. You got it, right?’ Chani, on the other hand, is a hard worker, so he just does things by force. I had a hard time preparing for this album caught in the middle of those two.” 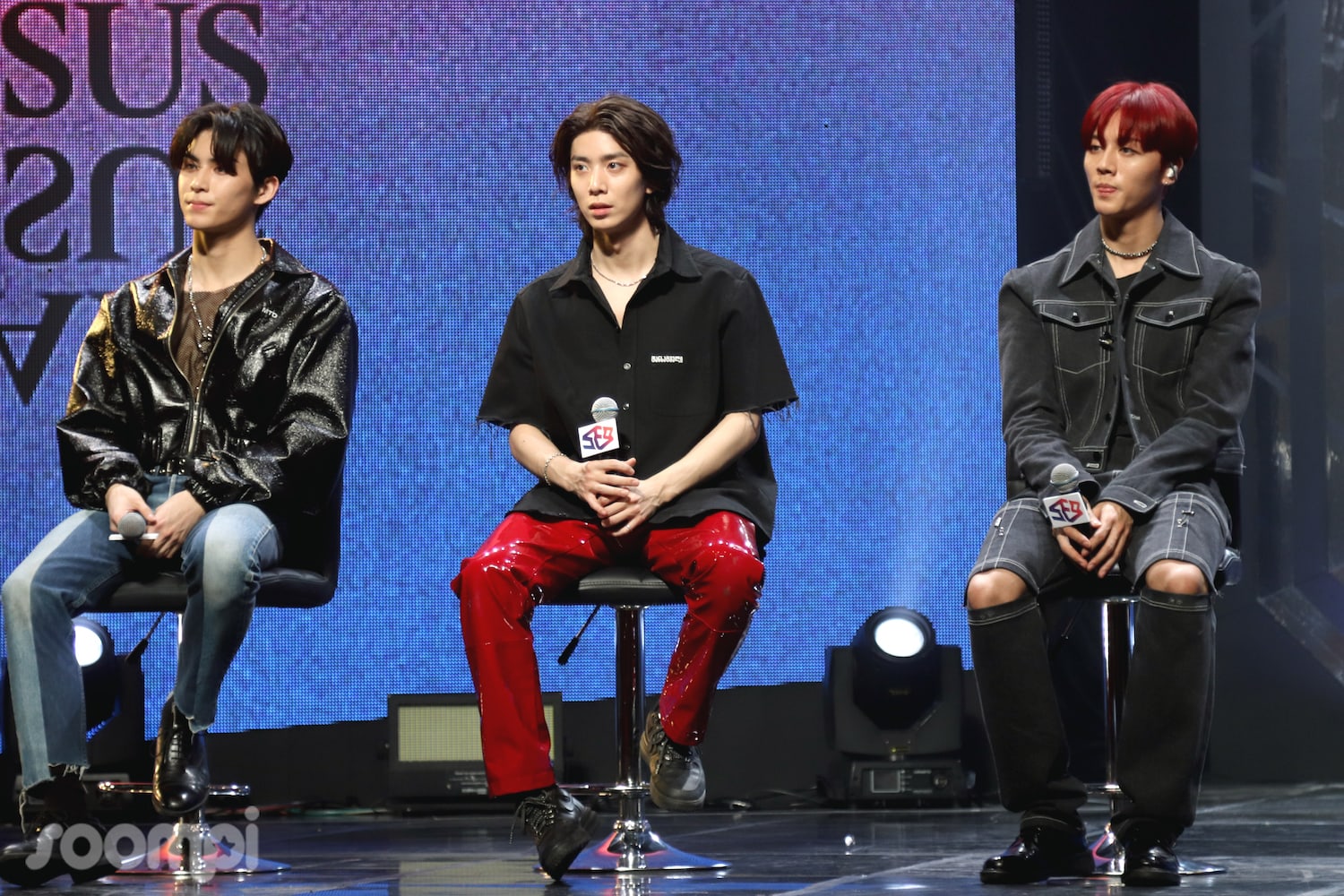 SF9 is a hot topic these days, and Rowoon has been feeling some pressure about it. He said, “I’ve had the most individual activities until now, but I always thought the other members would do better if they were given the same job. The pressure is inevitable, but I can assure you that there are many more charming members in our group.” On the other hand, Chani shared, “Rather than feeling pressured, my goal is to promote for a long time with my hyungs. Rowoon always looks out for me, but I haven’t been able to thank him. I’d like to thank him now.”

While answering a question about who fits the sexy concept best, SF9 suggested that each member point at the member they wanted to choose. As a result, Taeyang and Hwiyoung came out as the members who can pull off the sexy concept best. Taeyang remarked, “We use the same room, so that must have made us become similar.” 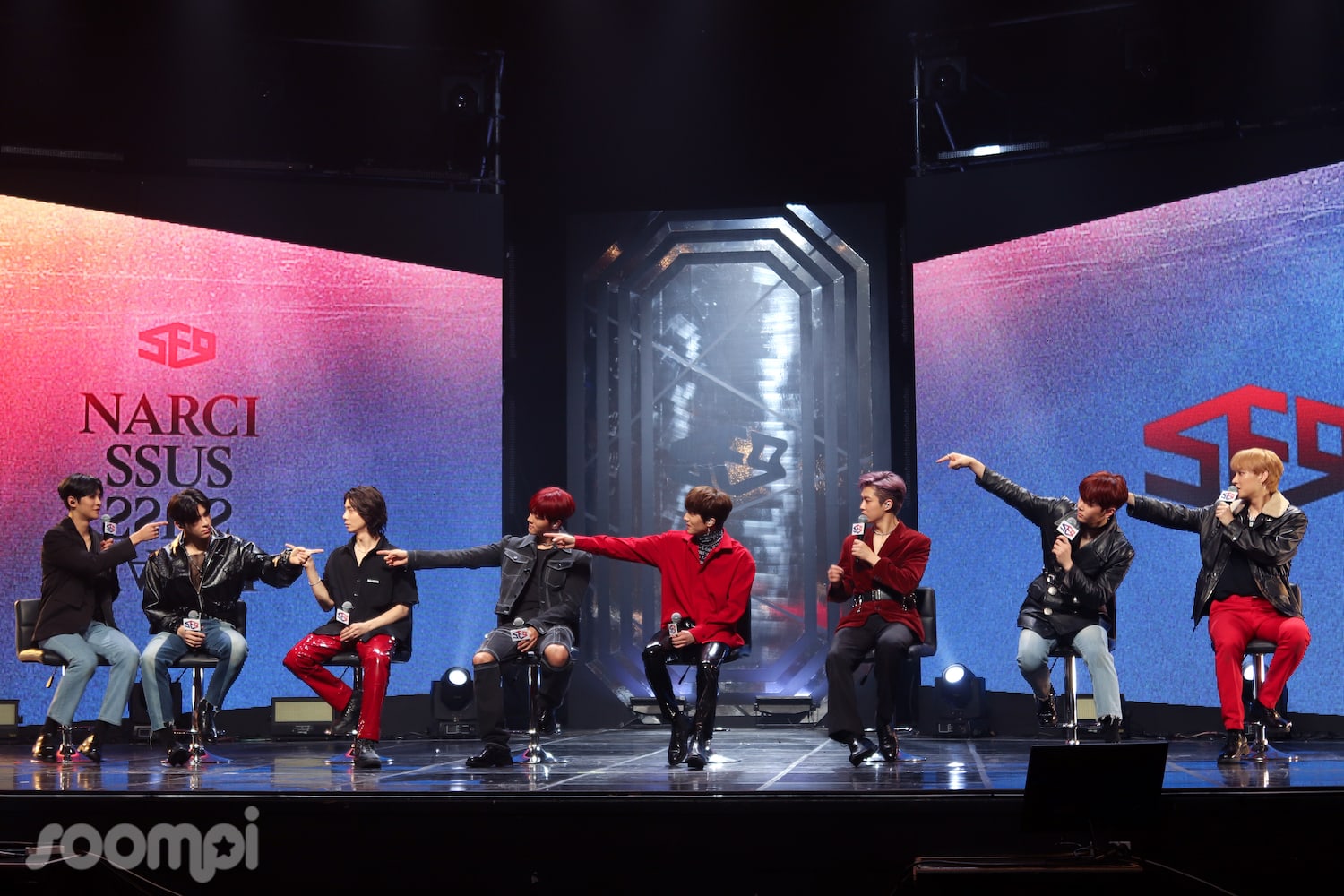 Youngbin then gave an update on how Zuho was doing, saying, “He had to sit out [promotions] after preparing for the album together, and it was because the hospital recommended that he recover fully before promoting so that his condition doesn’t get worse. He wrote in our group chat that he was sorry he couldn’t be with us when we’re all working so hard.”

Changing gears to talk about their music, Inseong said that all of the members had grown musically. “We’ve done new things every album. Studying the new concepts and practicing different genres gave us the chance to each make our own musical colors grow. In my case, I used to sing ballads, but performing dance tracks has made me try out sexy R&B vocal styles.”

Rowoon shared his take on their concepts, saying, “We’ve done various concepts until now, ranging from the playful concept of ‘Mamma Mia’ to the ‘knights of the sun’ concept of ‘O Sole Mio.’ We have lots of different sides to us, and we’re just taking those out and showing them one at a time.” He then asked why Taeyang kept glancing at Hwiyoung, and Taeyang explained, “I just wanted to say that Hwiyoung has been staying after practice hours to practice more every day. [Watching him,] I thought, ‘he must be tired by now,’ but he kept working on writing songs and rap lyrics. I think [those efforts] build up album after album and create a synergy.” 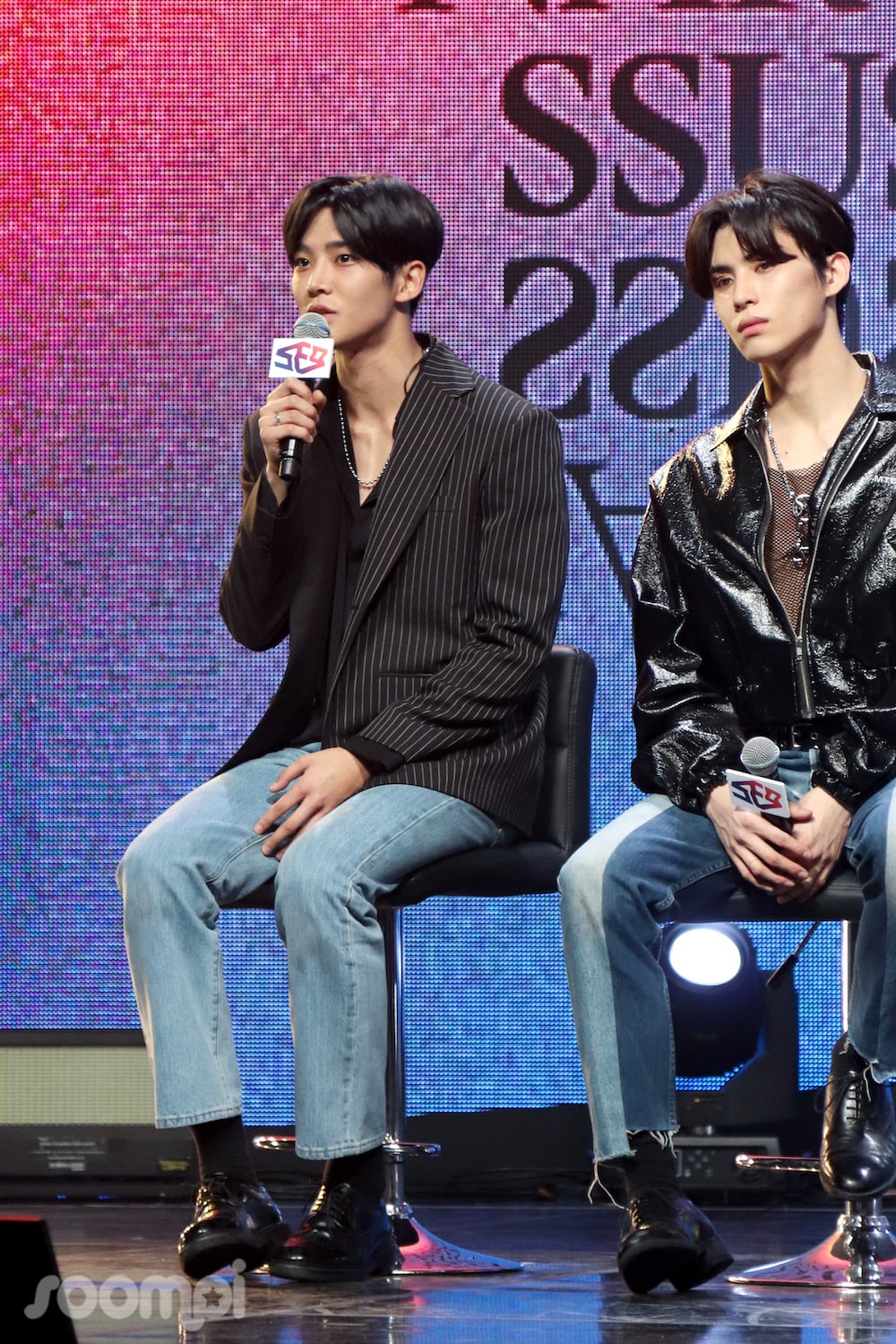 The members are all satisfied with their title track, but if they had to choose a B-side track to be the title song, Youngbin would choose “The Beat Goes On.” He explained, “If you look at the lyrics, the lyrics talk about the universe and mystical things. Our fans are called FANTASY, so if this song had become the title song, I think they would have liked it. Also, when people see the ‘SF’ in our group name, they often think of ‘science fiction,’ even though it’s actually ‘sensational feeling.’ So I think it would have matched with us well.”

Finally, Rowoon shared that their goal for their promotions with “Enough” is to take No. 1 on a music show. He promised that if they reached this goal, they would dance in any outfit chosen by FANTASY, and they would also show a performance of their B-side track “The Beat Goes On.” Asked if they were really okay with any outfit, Rowoon wittily responded, “I’ll trust our fans.”