“They say that even mountains and rivers change in 10 years, but I want us to be a group that keeps our musical color and our passion for music,” described SF9’s Rowoon. Taeyang had a more lighthearted take on how he thinks the group will be seen in 10 years, saying with a laugh in English: “Legend.”

Soompi recently sat down with this breakout boy group for an exclusive interview to find out more about they’ve got planned and to get their take on their career so far.

The nine members of SF9 (Youngbin, Inseong, Jaeyoon, Dawon, Rowoon, Zuho, Taeyang, Hwiyoung, and Chani) made their debut as FNC Entertainment’s first male dance group in October 2016 with the single “Feeling Sensation” and its title track “Fanfare.” They’ve since gone on to release five mini albums, proving their range with diverse songs such as the Latin pop-inspired “O Sole Mio,” the dance track “Easy Love” with its synth sound and emotional lyrics, the progressive dark pop song “Now or Never,” and more.

The group returns on February 20 with their sixth mini album “Narcissus,” featuring the title track “Enough.” Several of the members took part in writing lyrics for their new mini album, and Zuho co-composed two of the tracks (although the rapper unfortunately will be unable to join promotions due to an injury).

Since their “Now or Never” comeback last July, the members have been busy both as a group and individually with their first Korean solo concert last fall, promotions in Japan, acting roles in dramas, song collaborations, regular appearances on variety shows, and more. A spotlight is also shining on the group after their youngest member Chani acted in “SKY Castle,” a smash hit drama that recently gripped the nation.

When asked to describe what they’re looking forward to for this comeback, leader Youngbin said, “We’ve prepared a concept that’s a bit more sexy this time, so we’re excited to see our fans’ reactions.”

Rowoon described how the group is feeling as they get ready for their first comeback of 2019. “Since we’re making a comeback for the first time in a while and our fans are really excited, we’ve been working hard to prepare a perfect album,” he said. 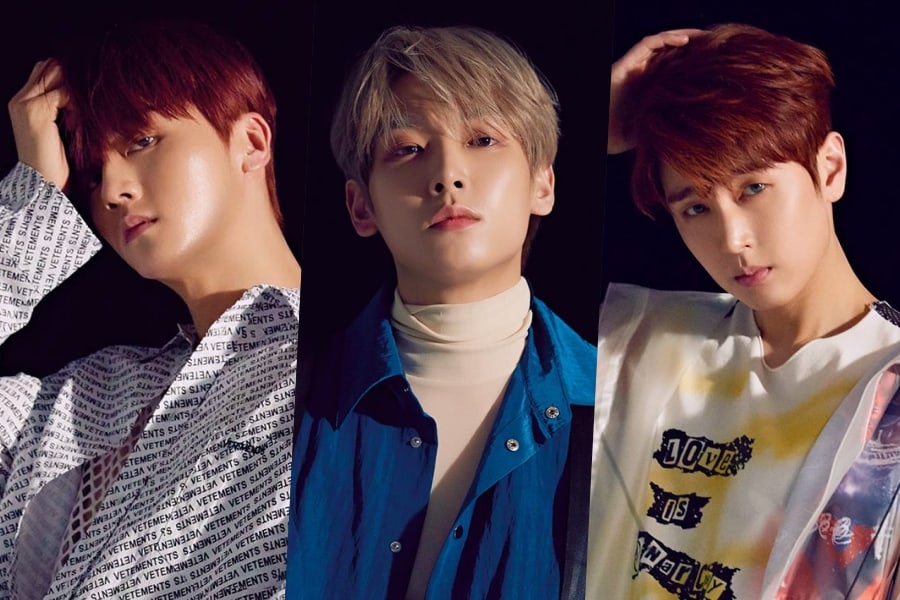 Youngbin explained that the group’s concept is based on Narcissus in Greek mythology, who falls in love with himself when he sees his reflection. “It’s a song about self-love and it says we’re already beautiful enough inside, so we don’t need to become any more beautiful,” he said.

Their comeback will allow the group to show their more mature side again with a sexy concept, but the tone wasn’t too serious on the set of the music video. Youngbin described how their see-through shirts for this concept provided some funny moments while filming. He said, “We were teasing each other and saying, ‘We can see everything through your shirt.’ It was a fun shoot.”

“We definitely participated more while we were preparing for this album.”

SF9 is known for their ability to pull off challenging choreography, both for their title tracks as well as their b-sides, and recently they’ve had increasing chances to showcase their creative talents through choreographing some of their own performances.

When asked to describe the process of learning the dance for “Enough” and the members’ involvement in their comeback choreography, main dancer Taeyang said, “We definitely participated more while we were preparing for this album. For our title track, we received the draft choreography from the choreographers, and to be honest we only had a week to practice it, so we prepared a lot within a short time.”

“In terms of the other songs, the members produced the choreography together and we’re planning to show a lot during our performances,” he explained.

Inseong named all their title tracks over the years as the songs with the hardest choreography, but also recalled how “Jungle Game” has the most difficult dance for him personally. “Jungle Game” is a song off the group’s 2017 mini album “Burning Sensation” that features acrobatic choreography including a move where Chani is aided by his fellow members as he jumps over Taeyang, does a backwards somersault, and gets lifted through the air to sit on Rowoon’s shoulders before flipping backwards on to the ground — all within about 10 seconds.

“It’s kind of a circus,” said Inseong in English. “When you first look at our show of ‘Jungle Game,’ Chani’s like flying and all the moves are so dynamic, so I think that one was the toughest one. I remember that we practiced that for three months. It was a former title before ‘Fanfare,’ so we practiced that song for a long time.”

The group also talked about the biggest changes they’ve noticed since their debut in 2016. “I think that we’re working better together over time,” said Rowoon. “We were close with each other when we debuted as well, but a lot has happened as we release albums and promote. We fight sometimes and good things happen too, and as we make memories together it feels like our teamwork has improved.”

Inseong added, “I think that our visuals have upgraded,” earning a cheer from some of his fellow members. He described how they’ve also improved in terms of their teamwork and gotten better at finding the right camera at music shows.

When asked which member in particular seems to have changed in terms of looks or personality since their debut, the group chose Hwiyoung. Rowoon explained, “When we first debuted, he was really like a baby and cute, but now I think he’s a member that shows off a really mature charm.”

Hwiyoung laughed and responded, “I don’t know if I should like that the members think that, but they still treat me exactly the same way.”

SF9 also looked back on memorable performances from their career so far, and Jaeyoon first named their Korean solo concert as the most memorable performance for him. He said, “It was our first concert in Korea, which we’d really been waiting for. And it was the first time I’d seen so many FANTASY who came to see us, so it was a really moving show.”

Chani also picked their concert as a standout memory. “It was meaningful since it was our first, and I feel like we learned and experienced a lot,” he commented. “It was so much fun.”

Dawon mentioned doing covers of songs by senior artists and said he hopes to do that more. The others shared memories of their covers of tracks such as BTS’s “Fire” and EXO’s “Monster” at events such as “Music Bank in Chile” and KCON. “We’ve done a lot of covers, and those performances are really memorable for us,” said Inseong.

“It made me feel like I want to become a singer that can spread awareness about K-pop throughout the world, like those luminous senior artists.”

For Rowoon, the chance to do cover performances has been an inspiration. “It’s such an honor to perform covers of songs by senior artists that we think of as our role models,” he said. “And when we performed their songs, I saw the way that the fans cheered. It made me feel like I want to become a singer that can spread awareness about K-pop throughout the world, like those luminous senior artists.”

Hwiyoung said, “There have been a lot of performances, but a memorable one was our performance at our first MAMA ceremony soon after we debuted.” Shortly after their debut, SF9 attended the 2016 Mnet Asian Music Awards and performed on the red carpet before the show. He added, “It was our first award ceremony, so it felt special.” 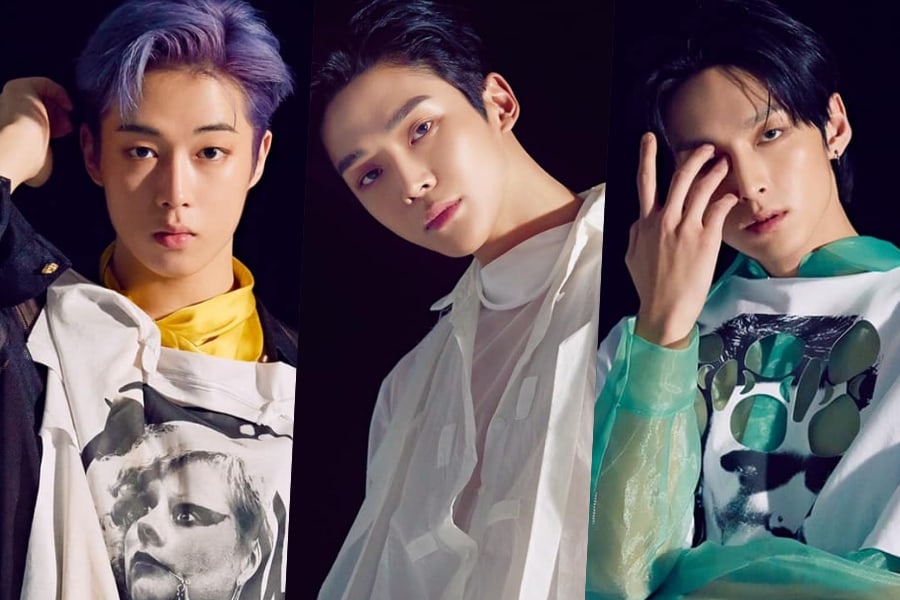 SF9 still has lots of things to show, and Rowoon talked about his personal hope to showcase their various talents through sub-units, which they haven’t tried yet. “Our members are all really charming and talented,” he said. “So for example, we have our rappers Hwiyoung, Chani, Youngbin, and Zuho, and they could be a rap unit. Dawon and Taeyang are good at rhythmic songs so they could make music that’s a bit similar to GD X Taeyang. And the members who are great at ballads like Jaeyoon and Inseong could be a ballad unit that does music like Homme. I think we’re a versatile group that’s similar to a rainbow.”

When asked if there’s any advice they would give themselves if they could go back to when they first debuted, Youngbin shared some wise words related to their current comeback. “I’d want to say to SF9, in exactly two years and three months, you’re going to have a lot of mixed emotions, but you’re going to do well at overcoming it,” he said. “In two years and three months, you’ll make good memories with your members, and you should enjoy this completely.” 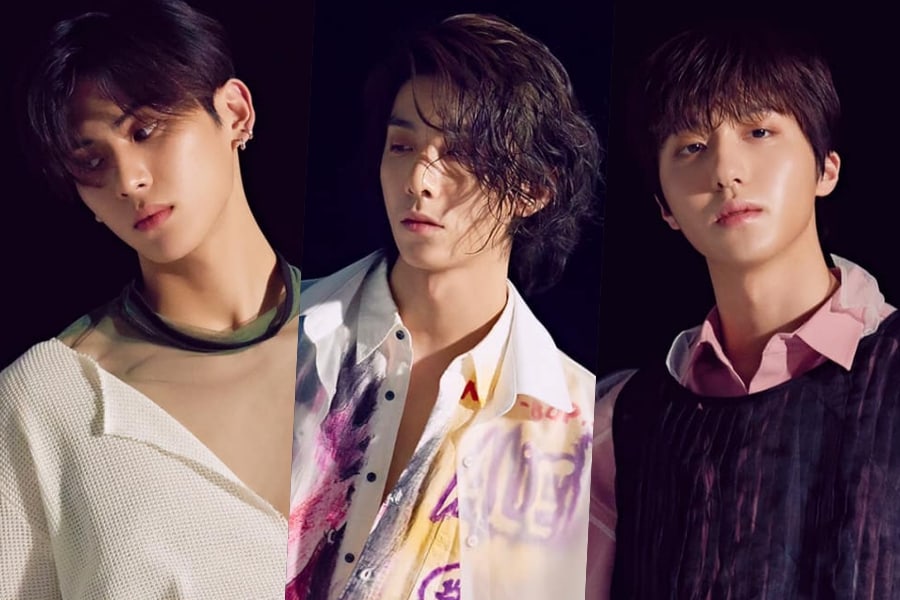 The group is also looking at both short and long-term goals as they plan their future. Inseong named a goal for the group as “Having a worldwide tour.” They’ll soon be making this dream a reality as they embark on a world tour. Youngbin said, “There are FANTASY all over the globe, and we want to go anywhere, all around the world.” For specific places they’d like to perform in, Jaeyoon picked France, while Inseong shared his goal of performing one day at Wembley Stadium in London, England.

Rowoon said, “I think that there’s no limit when it comes to goals. Our first step is the goal we want to achieve this year, which is coming in No. 1. Our ultimate goal is to happily spend a long time sharing our music with confidence and making every performance enjoyable.”