WINNER ended their first tour of North America with a bang!

On January 29, the four-member group electrified the crowd at New York City’s Madison Square Garden, the final stop of the North American leg of their first world tour “EVERYWHERE.” Throughout the night, the members of WINNER were clearly having a blast onstage, joking around with one another during their performances and playfully hamming it up for the audience at every opportunity.

The group also communicated with their fans entirely in English throughout the concert. After kicking off the show with high-energy performances of their songs “Really Really” and “Hello,” WINNER hyped up the crowd by sharing how excited they were to be performing in New York. Leader Kang Seung Yoon started off by exclaiming, “Finally, we arrive here in NYC for our own concert!”

Referring to the group’s pre-debut “New York project” from 2014, Kang Seung Yoon went on, “This was our second visit to New York City, and I had lots of good memories in this city. So I’ve been looking forward to this moment a lot.” He later added, “When I first came to New York, I never dreamed I would be able to sing in this place. Because it was before my debut. At that time, I was just aiming for my debut, so this moment is like a dream.” 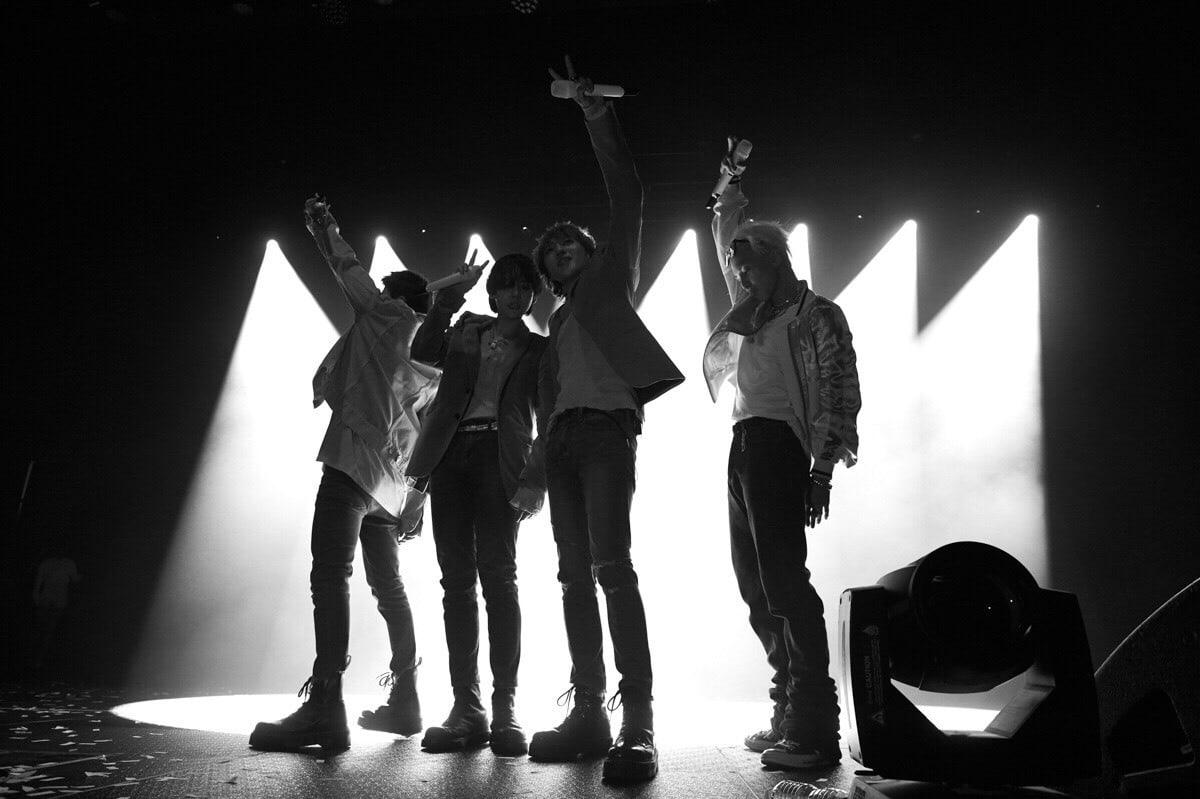 Each of the four members later took to the stage on their own, showcasing their individual styles through a colorful array of solo performances. Song Mino thrilled the crowd with passionate renditions of his recent solo tracks “Trigger” and “Fiancé,” driving fans wild at one point when he casually tossed his coat aside before jumping into the second verse of “Trigger.”

Meanwhile, Kim Jin Woo performed an emotional cover of YG Entertainment labelmate G-Dragon’s “Untitled, 2014,” hopping off stage in the middle of the song in order to get closer to the audience. Kang Seung Yoon sang his chart-topping 2013 solo debut track “It Rains,” before bringing out his guitar to perform his famous cover of Yoon Jong Shin‘s “Instinctively.”

The WINNER leader also performed a special a cappella cover of Bazzi’s “Beautiful,” adding, “I really love this song, and when I thought about this moment, [I thought,] this moment will be beautiful.” The crowd erupted in screams as he continued suavely, gesturing at the audience before him, “So I chose this song, and yeah, you’re beautiful.” 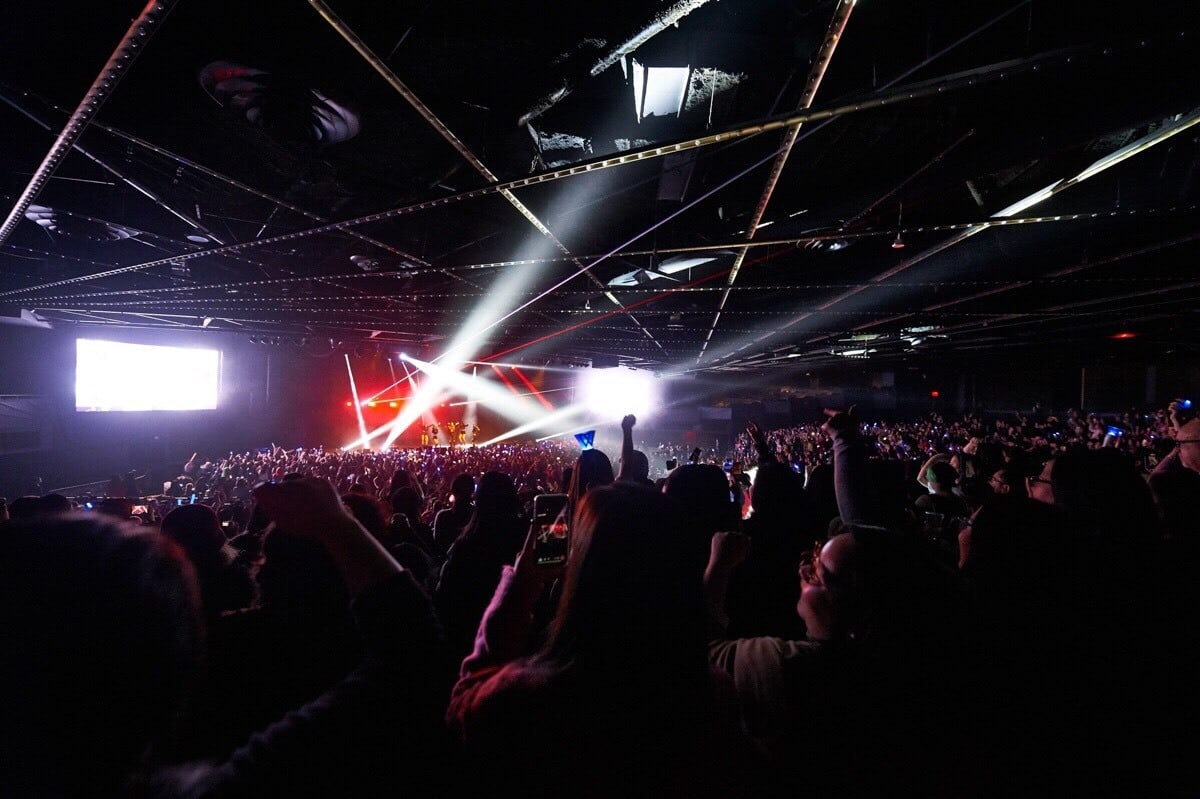 Finally, Lee Seung Hoon performed both Taeyang’s iconic hit “Ringa Linga” and his own song “Serenade” to the cheers of the enthusiastic crowd.

The group then shifted gears, announcing that it was “time to take it slow.” Kang Seung Yoon jokingly told the audience, “New York City, do you like WINNER’s emotional tracks? Then it’s okay to get a little teary. Don’t hold back.”

WINNER proceeded to launch into fan-favorite ballads “For,” “Raining,” and “Empty,” with the entire crowd bursting into screams of excitement at the very first bars of their debut title track. Before moving on to their song “Movie Star,” Kang Seung Yoon prompted the audience to sing along, saying, “We made this song to happily sing [together] with you guys. Let’s sing together.” 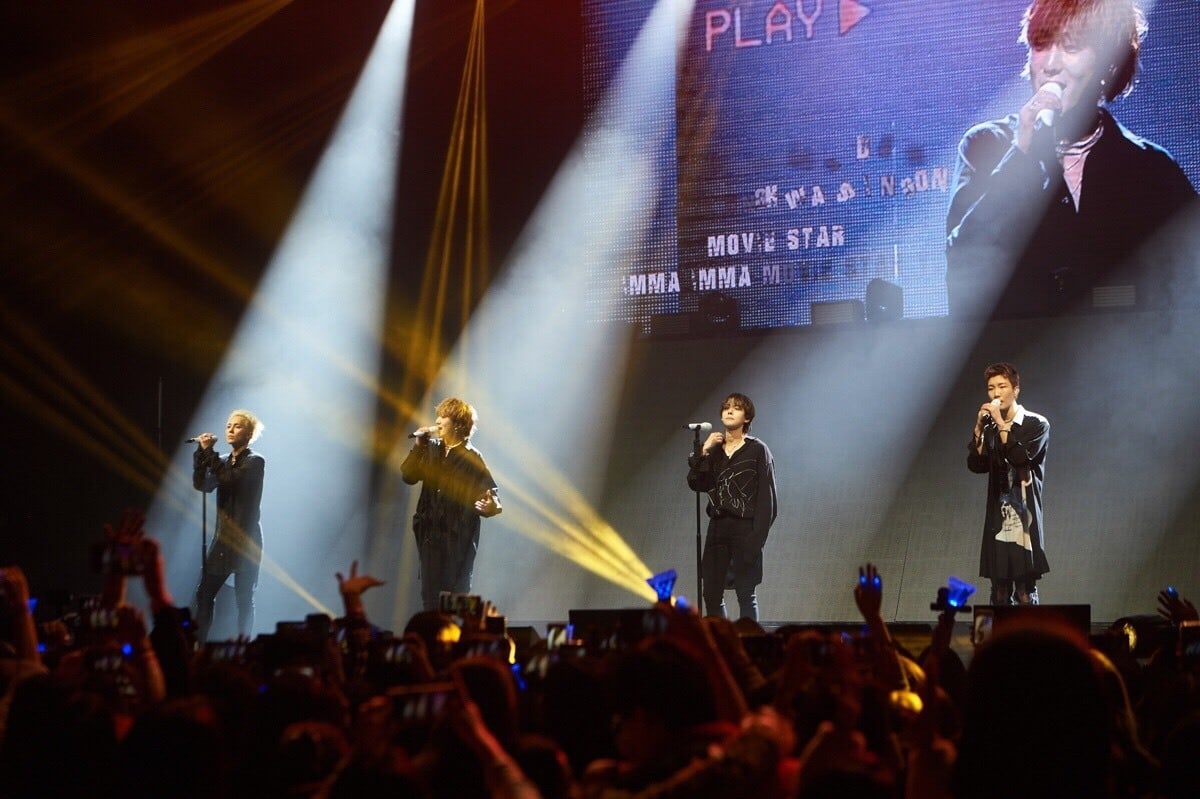 Later on, the group took a break to interact more personally with the crowd, interviewing several fans and asking them to sing parts of their favorite WINNER songs. When one fan mentioned that her favorite song was “Fool,” Kang Seung Yoon sang a brief snippet of the ballad together with her, and the rest of the audience enthusiastically joined in.

After bringing the crowd to their feet with their latest title track “Millions,” as well as their songs “Special Night,” “Island,” “Love Me Love Me,” and “La La,” it was time for the concert to come to a close. 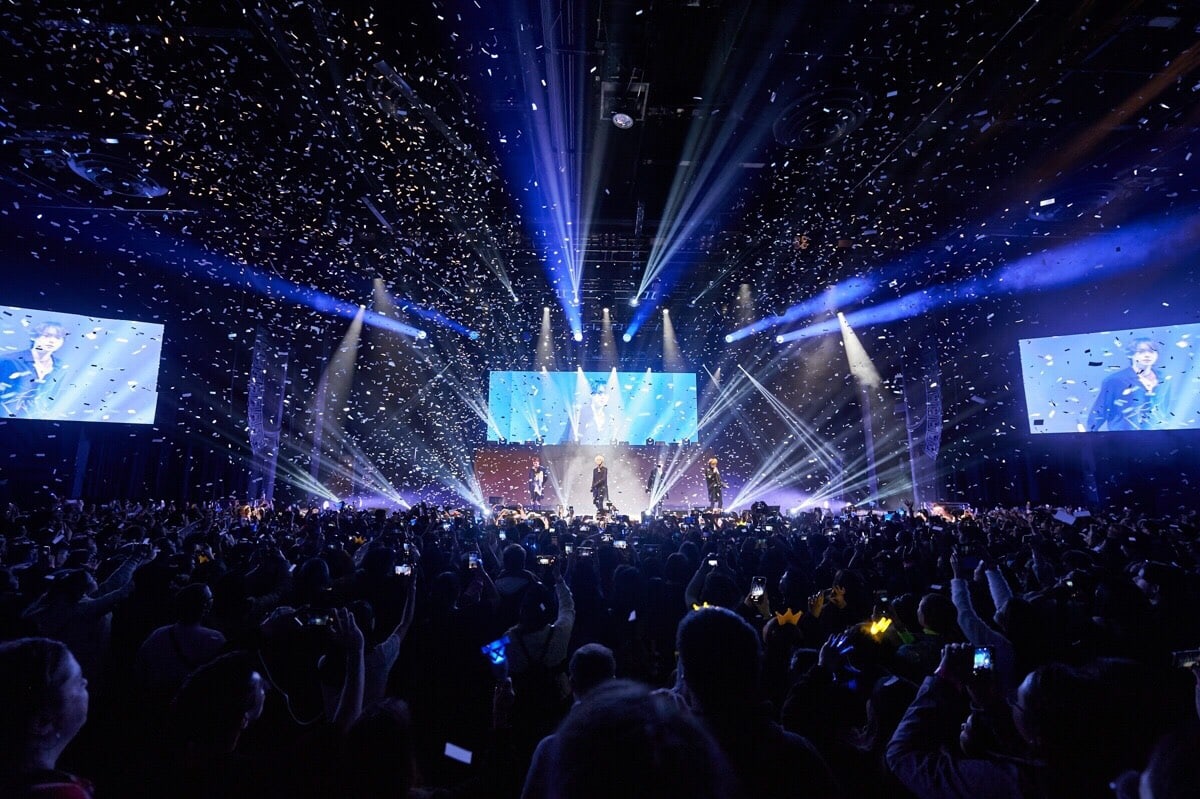 WINNER reappeared for the encore in their “Millions” hoodies, thanking their fans for showing so much passion and energy throughout the concert. “You guys are crazy!” exclaimed Song Mino. “I love New York. I love you guys. Today is awesome.” Kang Seung Yoon chimed in, “Tonight, we’re falling in love with New York City. You guys are amazing.”

He went on to mention that he would do his best to add more English lyrics to WINNER’s songs in the future, in order to make it easier for their English-speaking fans to sing along. “We’re going to try [adding] some English lyrics when we make songs,” said Kang Seung Yoon. “I want to sing together with you guys.”

The four members then shared their final thoughts as they wrapped up their very first tour of North America. Kim Jin Woo confessed that they had been dreading the end of the tour, revealing, “To be honest, we really didn’t want tonight’s show to happen. We were feeling down as we entered the soundcheck, [and] it’s due to the fact that our North America tour ends tonight. I’m sure we’ll be back again, but we felt something heavy in our hearts.”

“However,” he continued, “we are glad to have met many of you Inner Circle on our tour, and we felt loved by you. You make us feel alive. We are very happy and thankful for your love and support. We will meet again. Inner Circle, I love you!”

Song Mino told the group’s fans, “Thank you so much. This tour has left me with great memories. I am honored to have met all of you throughout this tour. Thank you, Inner Circle, and thank you, New York. I love you!”

Lee Seung Hoon added, “It was really cold today, so thank you so much for coming. It has taken a long time [for us] to come to New York, but I am so happy to meet you guys again. We will see you again. Thank you, New York!”

Finally, Kang Seung Yoon remarked, “New York is where we started our first project, and the first place we came to [in] the United States is New York. We’re so proud of being able to do the end of this tour in such a meaningful place, proving how much we have grown over the last five years. Today is a very, very special day for me. Thank you for giving me [a] reason to live as an artist.”

He continued, “I want to tell you my feelings [about] this tour, because it’s the final [show]. This is the last city of our North America tour. Starting from Seattle, we have performed in San Francisco, Los Angeles, Dallas, Chicago, Toronto, and New York. It was a great, great experience to perform in many cities. It was a busy schedule, but we were very happy to see you guys, and we cannot wait to meet all of our fans again. Inner Circles of all North America, thank you so much.”

Kang Seung Yoon then teased the release of their upcoming album, saying, “Guys, stay tuned for our new album. Though we’re far from each other, our songs will always be with you guys.”

Finally, before they left the stage, Song Mino surprised the audience by tearing off not only his hoodie, but also taking off the shirt he was wearing under it and throwing both into the crowd. Kang Seung Yoon also took off his own hoodie and threw it to a lucky fan, jokingly apologizing, “Sorry its smell sucks!” 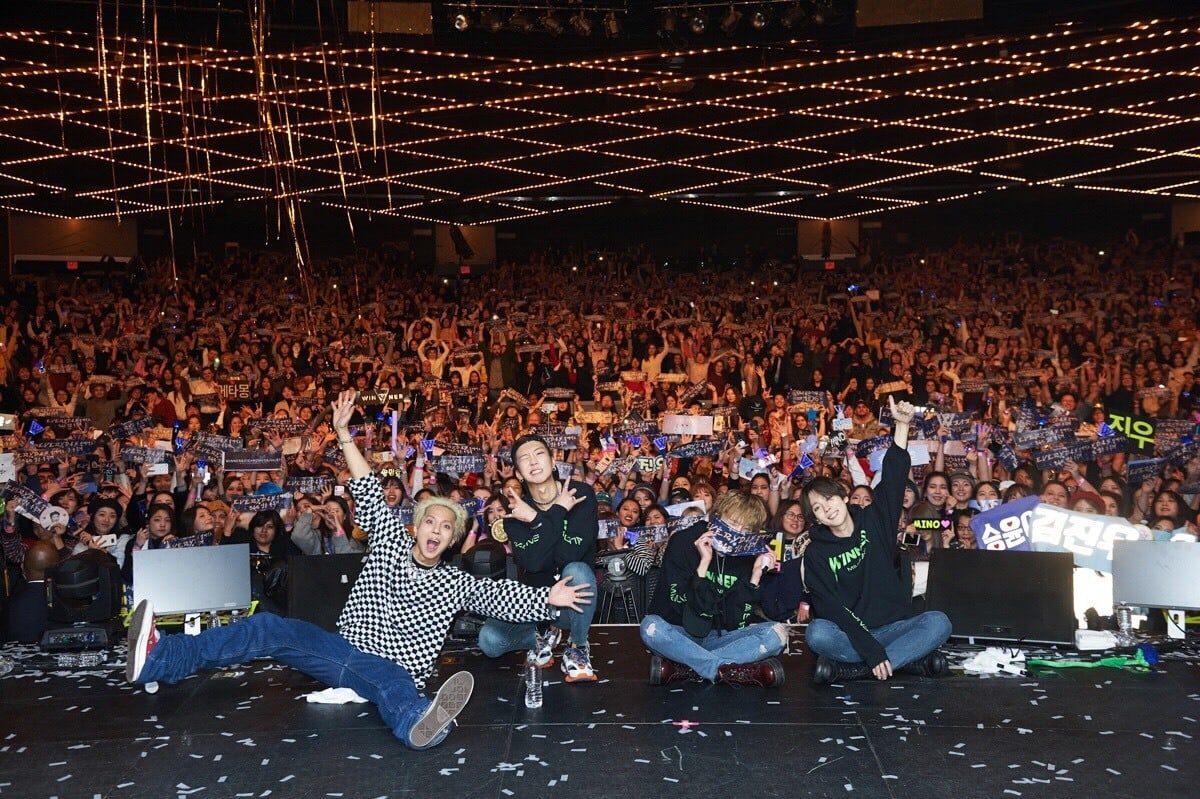 WINNER closed the show—and their North America tour—with an unexpected blast from the past. The group ended the concert with a performance of their song “Go Up,” which they first sang on YG Entertainment’s 2013 survival show “WIN: Who is Next?“, the Mnet reality program that ultimately decided their debut.

Kang Seung Yoon explained that they had chosen to perform the song—which they did not perform at previous stops on their tour—because it was the final concert of their North American journey. The track, with its lyrics about “going up” to bigger and better places, made for a fitting end to a particularly meaningful night—and a successful first tour—for the group. 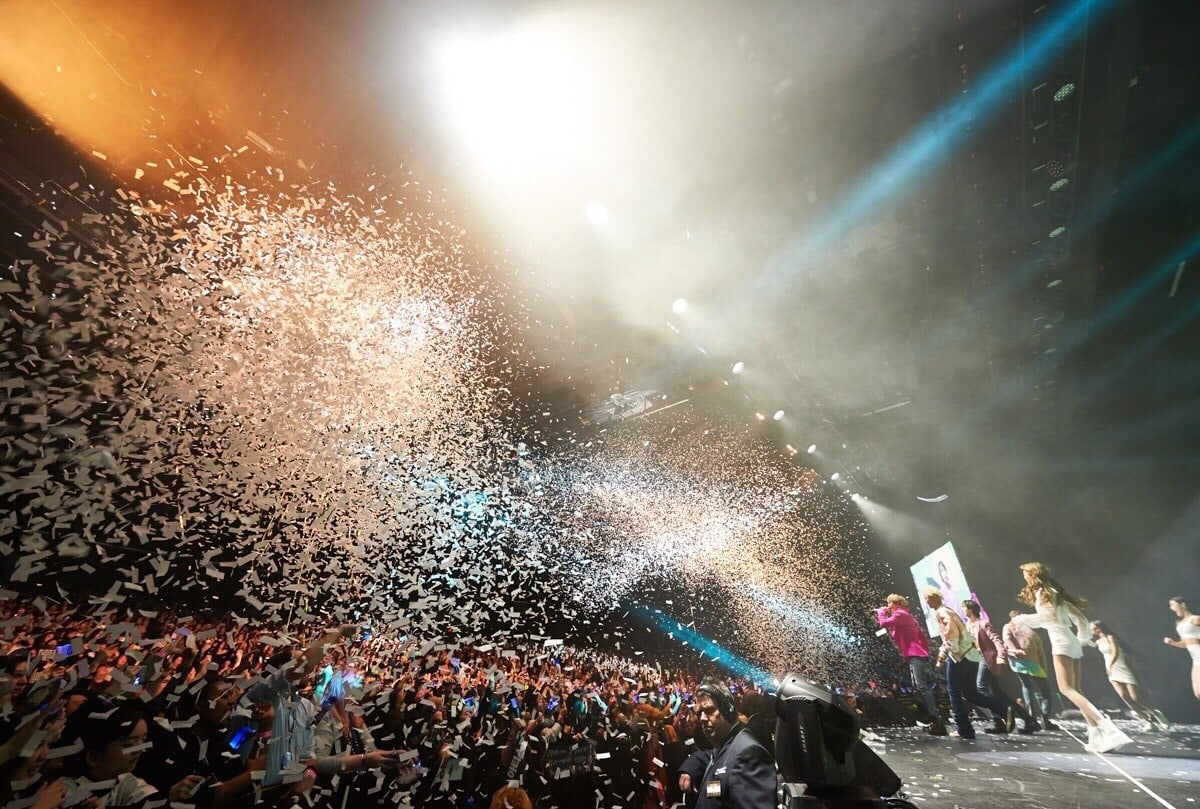 Special thanks to Live Nation for the photos and for inviting us out to the concert!