EXID members gathered for a V Live broadcast on December 28 titled, “Please Do It In November – EXID’s End-of-the-Year Party.”

LE, Junghwa, Hani, and Hyerin appeared on the broadcast and talked with their fans about what they were up to in 2017. Hani also updated fans on Solji and said, “Solji is doing really well and is very healthy. She ate a spicy pepper again today.” The other three members echoed her statement and added, “That’s right. Solji is doing really well right now. Many [fans] are worried, but she’s healthy and doing well.”

The EXID members also took time to express gratitude and say something to each other. Hani revealed, “I was really thankful we were honest with one another. I was thankful that each member honestly shared her thoughts and feelings.”

Hyerin commented, “What I want to say to the members is that I’m okay. After Solji became sick, many looked at me as if I suffered the most, but we all worked hard. I’m okay.” Junghwa added, “I was grateful that we spent this year fulfilling our individual roles. There were many difficulties, but I am really grateful this year went by safely. Our members really worked hard and I was thankful we were considerate of one another.” LE concluded, “This sounds repetitive, but I was thankful we cheered each other on and we worked really hard.” 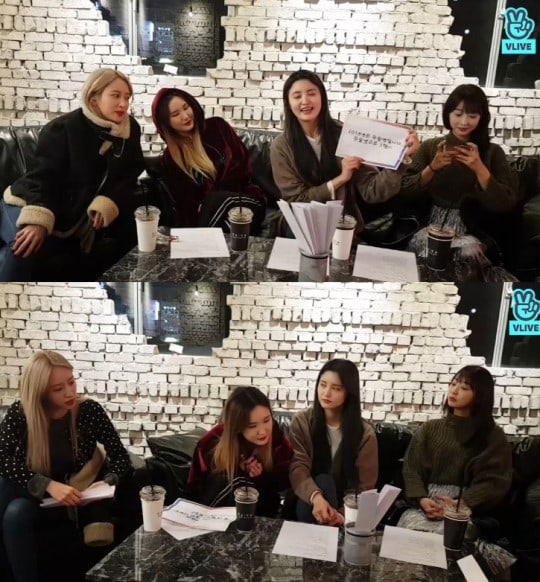 When asked to choose their most memorable stage this year, EXID chose the Seoul concert as the most memorable. As a runner-up, Hani chose the time the members wore cherry costumes and went to a performance venue for the first time without Solji.

The members also discussed their album and solo tracks. They commented that Hani’s collaboration with rapper Hanhae was “cool” but Hani replied, “Although Hanhae was there, I didn’t do it with my members so it was lonely.”

EXID members also had to praise themselves. Junghwa revealed, “Out of the 23 years of my life, this was the year that I loved myself the most. I highly value that.” Hani mentioned, “I figured out what I want and what kind of life I want to live through continuous self-reflection. I want to praise myself for that.” LE added, “I kind of lived a YOLO life like there was no tomorrow” to which Hani jokingly asked, “Don’t you live like that when we’re on a break as well?” and made everyone laugh.

At the end, the EXID members blew out the candles on a cake for having a safe year in 2017 and looked forward to a hopeful 2018.