EXID’s Hani gave fans a look at her everyday life on “Not the Same Person You Used to Know.”

On the January 17 episode of the Mnet variety show, Hani appeared as the star guest along with some of her closest friends including MMA fighter Kim Dong Hyun, B1A4’s Sandeul, her younger brother Ahn Tae Hwan, her best friend of 18 years Oh Ye Na, and EXID’s LE.

Introducing her guests, Hani said, “I tried to gather people who would say good things about me, but I failed.” Sandeul made everyone laugh by joking, “If you gathered these people and they don’t have good things to say, then that means there aren’t good things to be said.”

LE commented, “I came here with the plan of revealing everything. I don’t know why she invited me when it won’t be helpful to her. In one word, Hani is only book smart.” Sandeul revealed, “I’m Sandeul who has lots of resentment built up against Hani,” and added that he feels nauseous whenever he hears the sound of Hani’s ringback tone because she never picks up when he calls her. Hani defended herself, saying, “I don’t look at my phone very much,” and LE stated, “Don’t lie. You always have your phone in your hand.” 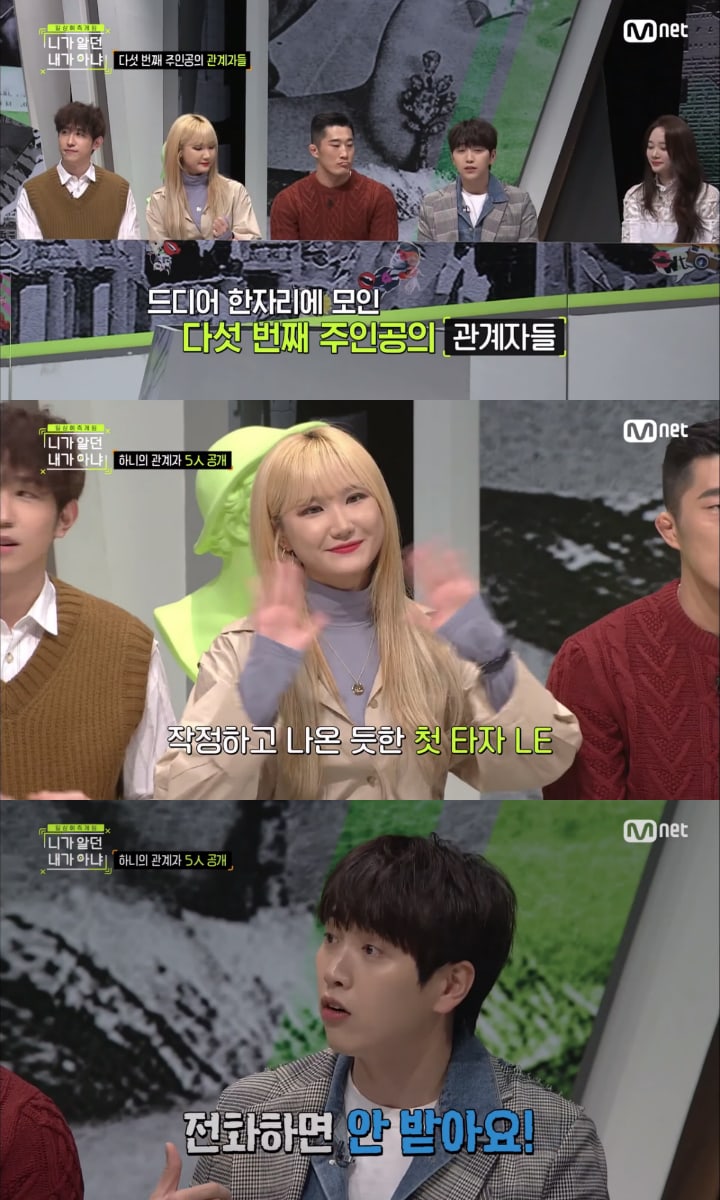 The footage of Hani’s day played on the screen and showed her starting the day off by making a list. LE commented, “We call that the death note,” and Hani revealed she has 84 items on her bucket list. “I haven’t done a lot of these yet,” said the singer. “Shaving my head is also on the list.”

Hani then called fellow EXID member and neighbor Jeonghwa to come over and help her throw away 10 items as stated on her bucket list. After trying various items in her apartment, Hani suddenly started shaking her legs. Back at the studio, Hani exclaimed, “Wait a minute, you’re really showing this?” In the continuing clip, Hani got up from her seat while saying, “My stomach hurts so much. What do I do?” MC Lee Soo Geun made everyone laugh by saying, “I guess it’s the same for both men and women to shake when you really have to go [to the bathroom],” and DinDin added, “You’re the first person on the show to have poop appear from the start.” 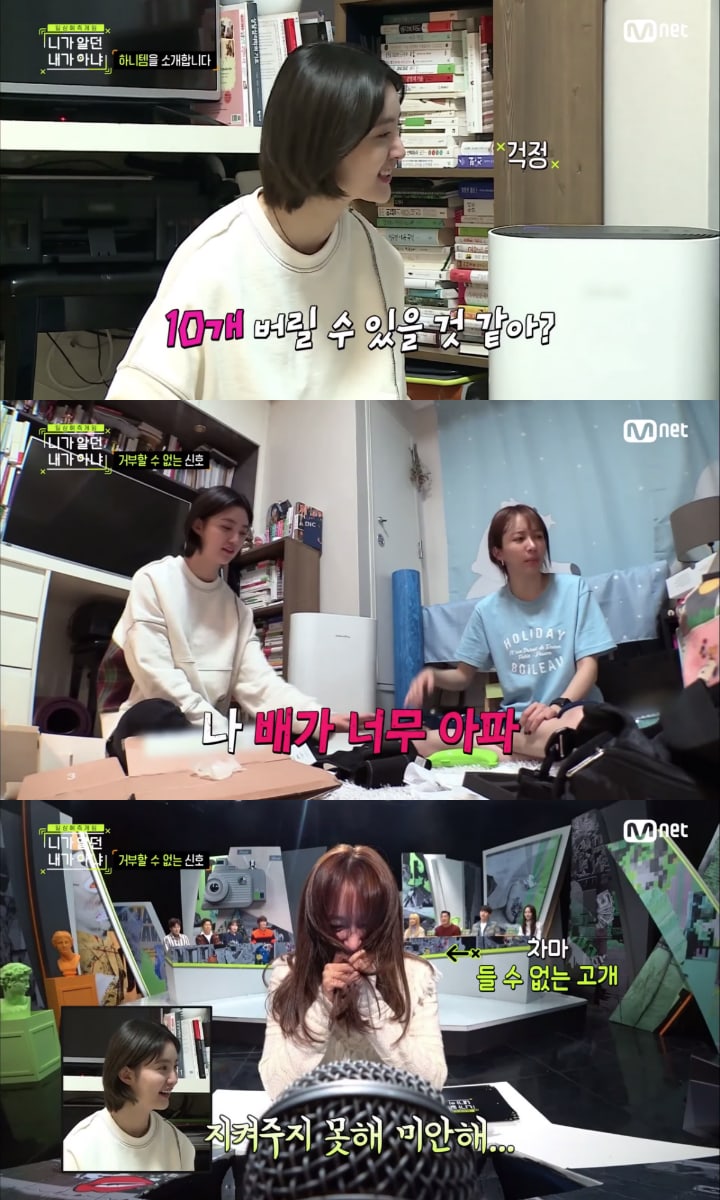 Hani then took on a mission of completing her usual 30-minute makeup routine in 20 minutes. She set a stopwatch and tried to accomplish her goal. Her food delivery arrived while she was still putting on makeup, and Jeonghwa said, “This is a noodle dish, so you’re going to have to finish within 10 minutes [so it doesn’t get soggy].”

After getting ready, Hani headed to a self-defense martial arts class. “There was a time when a taxi [I was in] briefly stopped and a drunk person got in trying to get a ride. I was so scared at the time.” revealed Hani. During a reflex test, Hani was praised by the coach for managing to block his sudden attacks and showing promising skills after following the coach’s examples. Kim Dong Hyun commented, “She’s doing a really good job,” and the coach said, “You must have done this before.”

After the class, Hani went to a traditional market to buy ingredients to make braised spicy chicken for the first time. While cooking, she called her mom for help about which oil she had to use but ended up burning the pot after being too engrossed in the conversation. 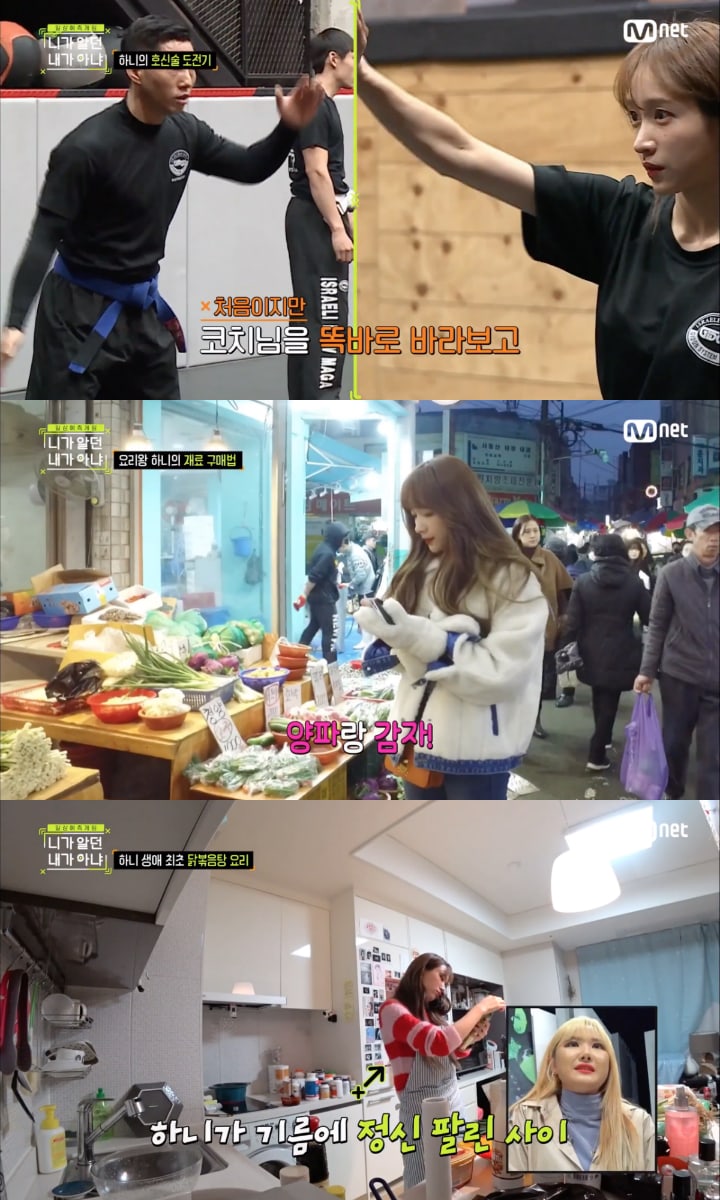 When the EXID members entered Hani’s home, they immediately commented about the smell. At first, Hani pretended that there was no problem, but soon after, she burst into sudden tears while cooking.

During her interview, she explained, “I had imagined it in my head. I was going to finish the spicy braised chicken before the members arrived and then make them green onion pancakes. I was so upset that things didn’t go according to my plan.”

The EXID members were surprised to see Hani in tears and comforted her by telling her that it was okay. In the end, Hani succeeded at cooking the dish and enjoyed a delicious dinner with the members. 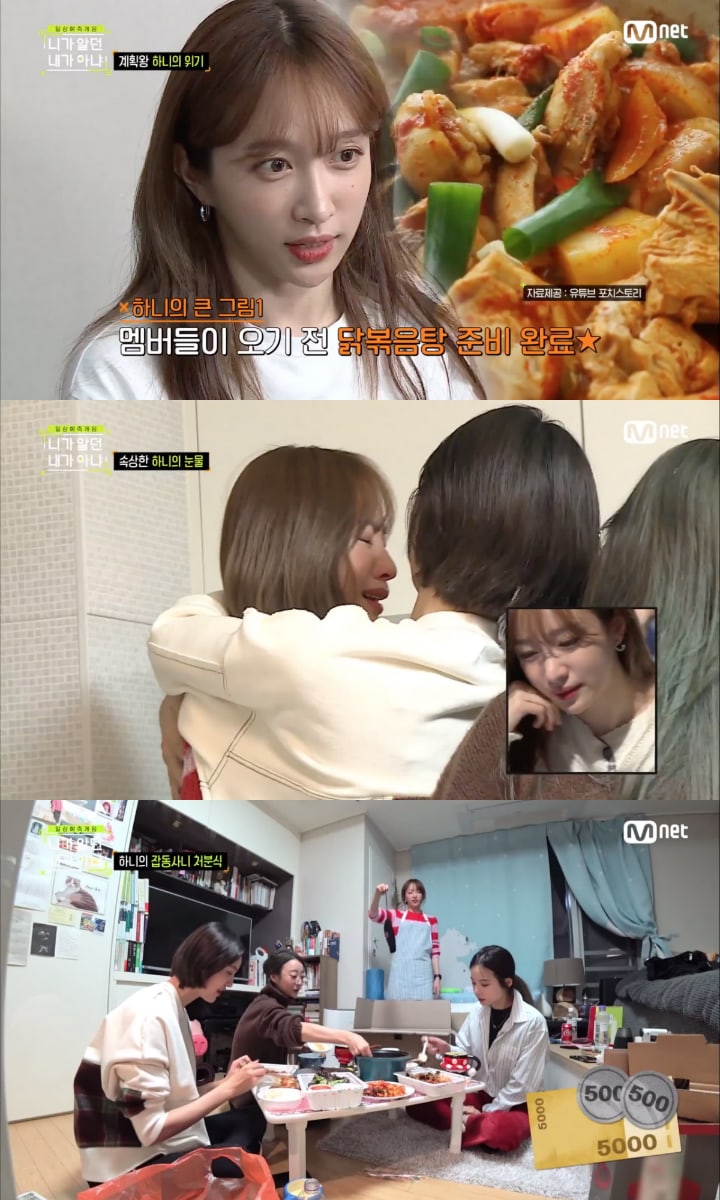