Recently, EXO’s Baekhyun held a live stream titled Let’s Eat in order to have a fun mukbang-style interaction with fans.

While they were talking about different foods, someone asked him about slushies, which made him totally freak out.

He couldn’t stop getting goosebumps even though he was just talking about it. 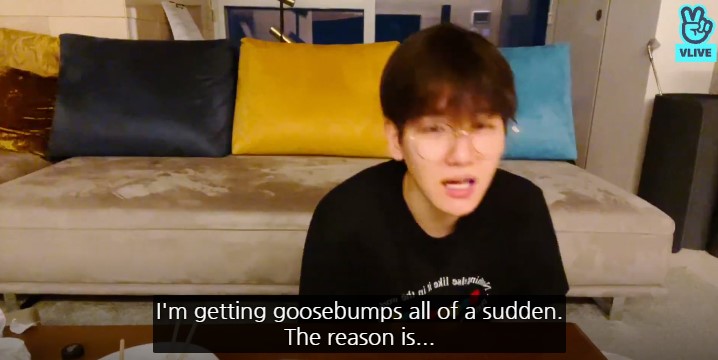 When he finally regained his composure, he revealed the reason why he kept getting goosebumps.

You know how the tip of the slushie straw looks like a shovel? Like this? When you have a slushie, after you’re almost done with it, you’d scoop it out at first, but towards the end, you’d just crumple the cup and sip it out so there’s only ice left, right? When you scoop out the ice, at the end, the straw would scratch the bottom of the cup and make a really unpleasant noise. When the paper cup is a little wet, and the bottom of it is…scratched while you scoop out the ice, it sounds a little like when you’re scratching a chalkboard. It gives you goosebumps. Do you know what I’m talking about? Goosebumps!

What’s hilarious is that after the live stream, Baekhyun responded to a fan who posted a video about his slushie crisis online. “Baekhyun looks like a little kid as he repeats how he gets goosebumps thinking about slushies five million times before fainting.”

Although his story was a chaotic mess, fans loved seeing his cute reaction to a slushie! Watch the full live stream below!