EXO-CBX Shares Funny Stories About Preparing For Their Comeback

EXO-CBX talked about their latest mini album and stories from preparing for their comeback with their fans.

On April 10, the subunit held a showcase for their second mini album “Blooming Days” that was also broadcasted on Naver’s V Live.

EXO-CBX shared, “We worked hard to prepare it. We released our first mini album in the fall, but this time, we released one in the warm spring. We’re nervous to see you guys in the spring.”

Regarding the biggest difference from their previous album, the subunit explained, “The vibes changed a lot. The first mini album was full of funky vibes and silliness, and the second mini album is youthful and cool.”

The members also updated fans on what they’ve been up to. They said, “We’re currently in the midst of EXO’s tour and practiced choreography whenever we had time. We really worked hard to prepare for it and didn’t rest.”

During a segment called “Weekly Diary,” EXO-CBX revealed their schedule from the previous week. The three members explained, “We were together for two to three months. Since we traveled together, our schedules were similar. These days, we’ve been busy filming a commercial, clips for our [Japan] concerts, and practicing for our albums.”

About “SMTOWN Live World Tour VI in Dubai,” they said, “EXO-CBX was the first performance to open the concert in Dubai. It was very meaningful.”

The subunit then introduced their title track “Blooming Day.” “We liked it as soon as we heard it, so we immediately chose it as our title track,” said EXO-CBX. “We also chose this track in order to show a sense of maturity different from that of our first album.”

The members chose the “killing part” of “Blooming Day” as, “Oh baby oh baby, so your scent can completely overtake me.” 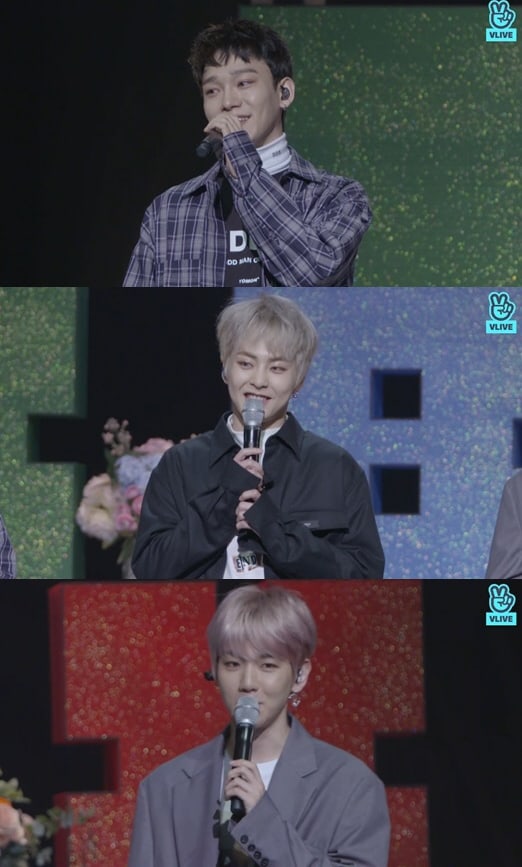 Baekhyun stated, “I thought that with this album, it would be fun if the fans listened to one song every day of the week,” referring to the concept of the seven tracks on the new album.

EXO-CBX also shared behind-the-scenes stories from their shoots for their album photos and MV. Baekhyun said, “There are many photos we took with flowers, and there’s something about it that I liked. In the MV, you know how there’s a scene where flowers are falling? I have a lot to say about that.”

He continued, “There’s a saying, ‘Don’t hit people even with flowers.’ I didn’t know that flowers could hurt this much.”

Chen commented, “A staff member said that when Xiumin and I laid down, he would throw flowers and to not be surprised. I thought, ‘Why would he say that?’ but I thought it was hailing. It really hurt.” Baekhyun added, “If you watch the MV, you can see Chen slightly flinching.”

EXO-CBX also flipped through their mini album and pointed out one photo in particular, where the three members are crouching on the slanted ground. They joked that the concept of this photo was that they’re short and small, then shared what actually happened during the shoot.

Baekhyun said, “That kind of expression was to match the concept, but also… To be honest, the food arrived right before we shot that photo. There were black bean noodles and hamburgers, but they said we had to hurry up and shoot before the sun set, so we sat there like this,” and made a pouty face.

Xiumin added, “The expression in that photo is actually, ‘Ah, I hope the noodles don’t get soggy,’” and the other two members agreed.

He also pointed out his hair to the fans during the showcase, saying, “You didn’t know that I dyed my hair blue, right? Then, I succeeded. I hid it on purpose.” Xiumin continued, “Honestly, I worried a lot that it wouldn’t match me.” When he asked the fans what they thought, they answered with loud cheers, voicing their approval.

EXO-CBX ended their showcase by performing their new title track”Blooming Day” live for the first time.