On April 10, EXO-CBX held a comeback showcase that was also broadcast via Naver’s V Live.

The subunit talked about their new second mini album “Blooming Days” and what they’ve been up to. They also read some of the fan-submitted requests for what they like to see the subunit do during these promotions.

Fans cheered when Xiumin picked “CBX vs. Chanyeol bowling battle.” Baekhyun said, “Because I’ve seen Chen bowl…” and hesitated, making everyone laugh. Chen confessed, “I’m really bad at anything with balls. I wasn’t born with the skill of being good at sports involving balls.”

Baekhyun said, “I’m great.” Xiumin added, “Chanyeol might think it’s laughable if he watches this, but Baekhyun is good too, so I don’t think we would lose.” 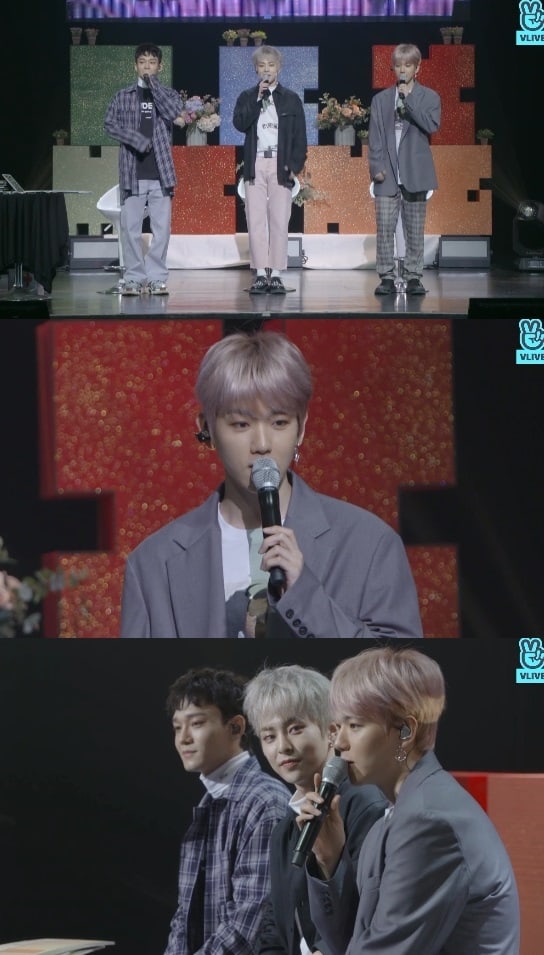 With the help of Baekhyun, Chen chose “EXO-CBX low pitch competition” and the three members did it on the spot. They followed this up with a high pitch battle as well.

Baekhyun commented, “Out of all of the EXO members, Chen has the lowest and highest pitch.” Chen replied, “Actually, there’s someone else that can go higher,” and named Xiumin.

“We want to show you various things during our promotions,” said Baekhyun. He added, “I thought about creating my own YouTube channel,” and later sang a line from “Someone Like You” for the fans.

EXO-CBX concluded, “We really want to show you the coin karaoke room. Please look forward to it.”