EXO’s Chanyeol has shared the story behind his costume for SM Entertainment’s annual Halloween party!

On the February 21 broadcast of tvN’s “Life Bar,” the cast members from “Memories of the Alhambra” made an appearance, including EXO’s Chanyeol, Lee Si Won, Park Hoon, and Han Bo Reum.

During the episode, Chanyeol talked about “#ChanyeolTteokbokki (spicy rice cake)” which started to trend on social media three years after he had shared the recipe online. Chanyeol explained, “It’s strange that [the recipe] resurfaced, but people have said on social media that Chanyeol tteokbokki is really tasty.” He added, “I’m really proud.” 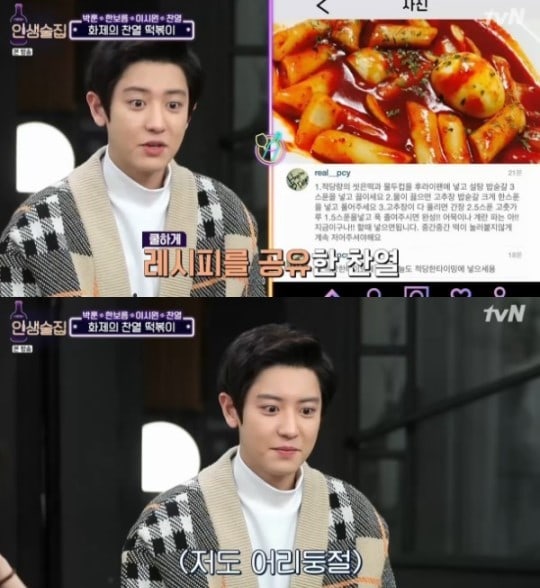 Chanyeol also shared his life motto, which is, “A moderate amount of passion is beneficial to the body,” explaining that he had tried many different hobbies after his debut. He shared, “I think one becomes healthier and more lively. However, I don’t think excessive passion is healthy. I’ve gotten hurt before, and my body is really important for my work.”

The EXO member also shared a behind-the-scenes story regarding his costume at SM Entertainment’s annual Halloween party. Chanyeol said, “I wore an Iron Man costume, and it became a big hit. So afterward, I decided to wear a Deadpool costume the next year.” He explained, “One month before Halloween, I actually contacted Deadpool’s designer to make the costume.”

Chanyeol said, “I politely introduced myself and said, ‘I have to take over Halloween. Please,’ and asked for fast delivery. After hearing my idea, the designer finished the outfit in four to five days and sent it by express mail, but [the package] didn’t come even after a few days.”

He explained that he became nervous as Halloween started to approach. Chanyeol shared, “Apparently, because of the gun and knife shape in the Deadpool outfit, [the package] was held by U.S. customs. In the end, it didn’t arrive on Halloween, and I didn’t attend the 2018 Halloween party.”

Expressing his sadness at the turn of events, Chanyeol said, “If I wore that, I would have been No. 1, but I didn’t go because I couldn’t bear seeing anyone else win first place. That day, SHINee’s Key won first place with a Voldemort costume.” He added, “Unfortunately, [my costume] arrived on November 2. My size had been measured, so it was even a perfect fit.” 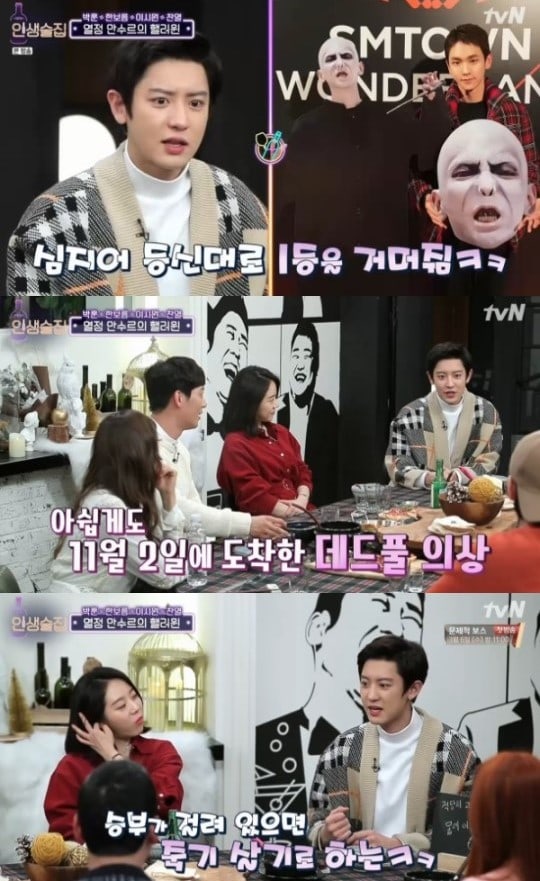 At Chanyeol’s story, Han Hye Jin commented, “I think you’re even more passionate than [TVXQ’s] Yunho,” who is well-known for his overflowing passion. Chanyeol replied, “When victory is on the line, I become very passionate.”