V (Kim Taehyung) turned 22 years old in Western reckoning on December 30. After midnight KST on the big day, fans showed their love for V with four worldwide trending topics in the top nine at the same time: “WePurpleUTaehyung,” “VeautifulDay,” “HAPPY BIRTHDAY TAEHYUNG,” and “태형 오빠” (“Taehyung oppa“). Other hashtags have also been trending as fans celebrate his birthday. 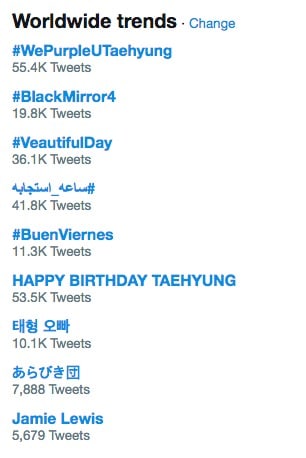 Check out some of fans’ tweets featuring their favorite V moments as well as lots of love!

this will always be my favorite video of taehyung ugh it is so pure and will always make my heart warm #WePurpleUTaehyung pic.twitter.com/5MeIgJ01sP

Of course, BTS also shared a collage of V for his birthday, as well as a shot of the guys together backstage at the 2017 KBS Song Festival with V’s cake!