On August 26 KST, BTS’s new reality program In The SOOP aired its second episode on JTBC. The highlight of this episode most definitely was ping-pong. Although all the members enjoyed a game of ping-pong, it seemed like no one enjoyed it just as much as Jimin did.

On the pin board that the members made that showed what they planned to do on the first day, Jimin’s plans included playing VR (virtual reality), playing soccer, and just bumming around. However, you can see from the first two episodes that Jimin started playing ping-pong in episode one and continued to play until the end of episode two.

In the first episode, Jimin didn’t even change out of his traditional clothes and continued to play with Jin. Although he did change clothes and play a bit of badminton in episode two, he went right back to ping-pong after taking a look at the fish Jin was about to use for dinner. 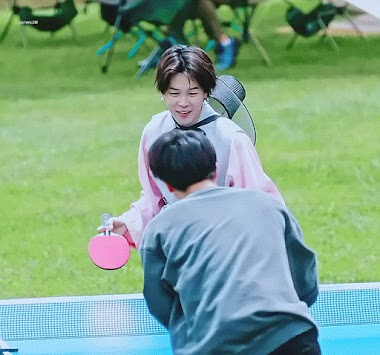 As the show continues, the other members go around trying out different things from fishing, playing with remote control boats, making plane models, playing the guitar and painting. But as the sun sets and becomes night, you can see Jimin still in the same place, right at the ping-pong table.

jimin being busy with the ping pong all daypic.twitter.com/D8z5rBejwX

In this clip you can see RM going upstairs and in the corner you can still see Jimin going at it with his ping-pong game!

Jimin doesn’t even seem phased with Jungkook and J-Hope playing with fireworks right next to them.

It’s no doubt that Jimin would be successful in anything he does considering how much dedication and effort he puts into just a game of ping-pong!

Take a look at BTS’s new digital single “Dynamite” below!

iHeartRadio Producer Can’t Keep His Eyes Off BTS’s Jin And… Well, Neither Can We

4 Korean Artists Who Were Once Beloved, But Are Now Given The Cold Shoulder By The Korean General Public