Here it comes, another K-drama for us to get hooked on. 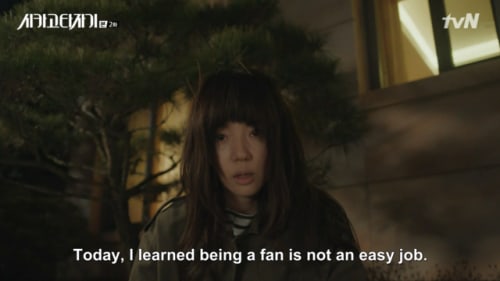 “Chicago Typewriter,” the latest drama from tvN, aired its first two episodes on April 7 and 8. I’ve been looking forward to this drama mainly because it connects modern characters to their past lives in 1930s Korea, and I’m a sucker for any K-drama that includes bits of Korean history. After watching the teasers, I was even more hyped about the quirky characters — but still not quite sure what to expect from the plot.

Luckily, the first two episodes did not disappoint. Mystery, comedy, and hints of romance and political intrigue… there’s something in this drama for everyone!

Han Se Joo (Yoo Ah In) is a writer, famous for both his best-selling books and his idol-like good looks. Se Joo’s latest novel is so successful that he heads on a global book tour and, while in Chicago, comes across an old typewriter originally from Kyungsung, Korea in the 1930s. He is immediately drawn to it, but its owner is unwilling to part with it.

Get yourself a man who looks at you the way Se Joo looks at a typewriter.

That is, until the typewriter, which appears to have an agenda of its own and the ability to control its surroundings, takes matters into its own hands (keys?) and orchestrates some supernatural events that creep out its owner (and me) enough that he ships it to Se Joo. Very mysterious.

Coincidentally, the woman tasked with delivering the typewriter to Se Joo’s home is none other than Jeon Sul (Im Soo Jung), his No. 1 fan.

As soon as Jeon Sul shows up outside Se Joo’s mansion with the typewriter, more peculiar things start to happen: a strange dog leads the two on a chase, an inexplicable earthquake shakes the house, and the author keeps getting unsettling flashbacks to his past life. 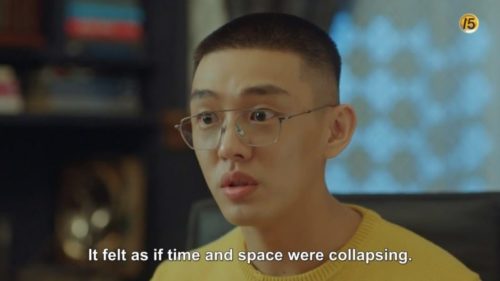 The strange events reach a climax when a man breaks into Se Joo’s house and attempts to kill him, claiming that the writer’s books inspired him to do so. Rumors surrounding Se Joo and his would-be murderer swirl, and between this and the frequent visions of his past life, the author finds himself unable to write for the first time in his life. These circumstances make way for the entry of ghost writer Yoo Jin Oh (Go Kyung Pyo), who we’ll be seeing more of in future episodes. 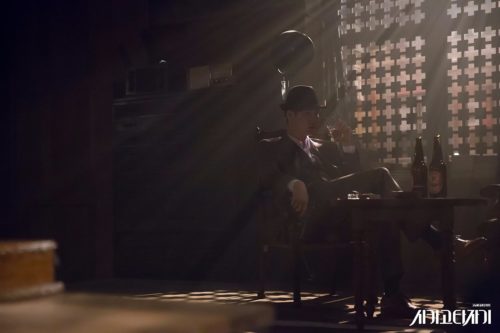 There are already a lot of pieces to this puzzle, and what we’ve seen so far has provided a good backdrop for the drama. With the introduction of the ghost writer and the transition of Jeon Sul from fan to anti-fan, the story finally starts to take shape, and I’m excited to see where it takes us.

The characters in this drama are expertly written; two episodes in and Se Joo and Jeon Sul are already both quirky and complex. Yoo Ah In is perfect as Se Joo, who is definitely arrogant and high-maintenance, but not unforgivably so. I have a feeling there’s more to him than the cocky persona he puts on, and we catch a few glimpses of this already.

Aww do I see hints of a soft side?

Jeon Sul is sweet and clever, but seems to be a little lost in life, which we all can relate to sometimes. It’s fun to watch her interact with Se Joo because she goes back and forth between the awe of being in her idol’s presence and indignation at his treatment of her. She may be nice, but she’s no pushover, and Im Soo Jung really brings both sides of this character to life. However, as well-intentioned as Jeon Sul is, she gets on my nerves at times — like when she’s a bit too pushy about trying to get into Se Joo’s house.

The drama has already hinted that the two have traumatic family histories, and we know that this is probably the reason Se Joo is so mistrusting of everyone and prickly towards Jeon Sul. I’m sure another layer of complexity will be added as we discover more about their past lives and how they influence who they are in the present, so it’ll be interesting to see how the drama unravels these characters for us as it progresses. I’m looking forward to watching Se Joo and Jeon Sul grow, and I hope we get more moments of Se Joo letting his guard down and showing some emotion, mostly because I could use more adorable scenes like this:

We just begin to meet the third lead, ghost writer Yoo Jin Oh, at the end of the second episode, and I’m interested to see what role he’ll take in relation to the other two leads, as well as what part he’ll play in the typewriter’s plan, whatever that may be.

One of the most difficult parts of this drama from a production standpoint is going to be incorporating the 1930s storyline into the modern one in a way that feels natural. So far, the drama is doing a great job switching between the two — giving us scenes from the past that mirror the present and transitioning between time periods with fades, spinning shots, and scenes that pull us into the typewriter itself and spit us out in the past.

The drama has also struck a good balance between the comedic and the serious, and there were enough moments of humor to give it a light feel despite the more weighty undertones, which I appreciated.

Past lives, complicated family histories, an attempted murder, and a typewriter with mysterious intentions: the drama has put a lot on the table for just two episodes, so there’s plenty of material for it to work with and I’m looking forward to watching how it weaves these elements together. We’ve gotten a lot of set-up content so far, so I’m hoping the drama will use this to begin to move forward with a more coherent story arc.

Another thing I’ll be interested to see is where the romance comes in, because I’m not feeling much chemistry between Se Joo and Jeon Sul, at least in their present lives — although I see hints of it in the flashbacks to their past lives.

Erm, is this love?

What I’m most intrigued by is the typewriter’s motive. It seems like in their past lives, the characters played some resistance role during the 1930s Japanese occupation of Korea. But why exactly does the typewriter want to reunite them in the present? I guess that’s part of the mystery, and I’m definitely hooked enough to keep watching to find out!

What do you think of “Chicago Typewriter” so far?