First Impressions: “The King Loves” Has Solid Start With Plenty Of Conflict, Romance, And Aesthetics

This week, MBC aired its new traditional drama, “The King Loves,” based on Kim Yi Ryung’s novel by the same name. The drama stars Im Siwan, making his return to dramas after three years and his first sageuk in five years; YoonA, starring in her first sageuk ever; and Hong Jong Hyun, taking a new role after playing a villainous prince in “Scarlet Heart: Goryeo.”

The main cast has already made a lot of splash in the media with their various returns, and it’s unfortunate that Im Siwan may not get to see the results of his work now that he’s serving his mandatory military service. On the bright side, the drama promises plenty of conflict in love and palace politics, like any good sageuk should.

After checking out the first four episodes, here are some thoughts on “The King Loves.”

“The King Loves” is about a crown prince named Won (played by Im Siwan) who deals with the troubles of being a young noble and figuring out his role in the kingdom. He becomes best friends with a noble’s son (also his future bodyguard) named Wang Lin (played by Hong Jong Hyun), but their relationship becomes strained when palace politics grow more hectic with Wang Lin’s family fighting for the throne. To top it off, both friends also fall for the same girl, Eun San (YoonA). It’s basic K-drama mathematics: two males + one female = a love triangle.

These days it’s hard to be especially original with a traditional drama; they always come down to love problems and throne politics (rarely war – have you ever noticed that?). “The King Loves” takes on the task and appears to hold its own in the first four episodes. Each character has their own plot line that’s independent enough from the others that it doesn’t feel like one character is over-dependent on another.

While the romance will seemingly be focused around the three main characters, the politics facet extends to the secondary and minor characters in the palace, with the throne being the focus. The king isn’t well-liked by the people; but what’s perhaps more worrisome is their thoughts on his son, Won, whose mother is a foreign noble. She desires her son to be a king, one who cares about the people, but deals with the same conflict as the king – other nobles are in competition for the throne, too. It’s an all-around battle for hearts and the throne. 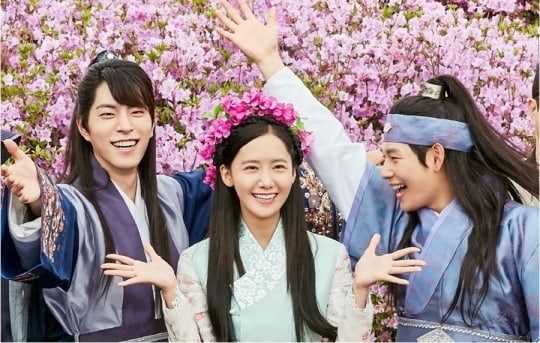 While there are three leads, Won could probably be considered the over-all main character of the drama, as most of the action and conflict revolves around him. It is called “The King Loves” and he’s the crown prince, so that figures. He’s an arrogant prince who still longs for acceptance by his father and the people. He’s pretty typical as far as “naive” princes go – it takes someone else to help him see and navigate the world outside the palace, and many of his actions have consequences that drastically effect those around him (most of which he’s actually surprised by – who knew a future leader of a kingdom could actually do that??).

An interesting part of Won’s character (and something I look forward to seeing him deal with throughout the drama) is that “The King Loves” directly addresses his heritage and the internal conflict, rather than just everyone around him (including his father) calling him a “half-breed.” He’s heard so many terrible things about the nature of his heritage that even he doubts he should exist.

Hong Jong Hyun isn’t a bad guy this time! Forgive me. I’m just really happy to see him in a role that isn’t psychotic. Wang Lin is the second son of one of the most powerful nobles in the kingdom, and his older brother is the most likely candidate for the throne after the crown prince. He became Won’s friend after his father told him to, but he also appears to legitimately care about him. However, where does his true loyalty lie? Family or friend? Chances are Wang Lin is going to find out by the time “The King Loves” ends. He’s also a bodyguard, so if we could get a few great action scenes with Wang Lin fighting, I would greatly appreciate that. 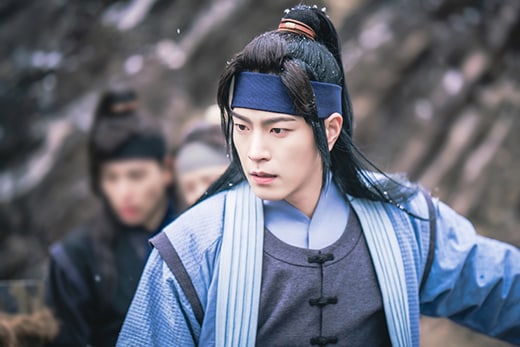 Eun San is the daughter of the wealthiest man in the kingdom, but after a series of tragic events, she’s forced to leave home and pretend to be a handmaiden. Eun San, however, isn’t your average damsel. She actually shoves Won against a tree and throws him to the ground; oh, and she beats him at sports, too. 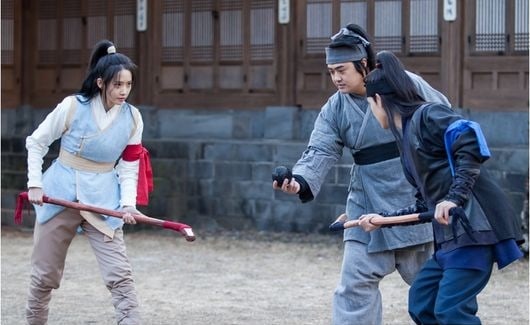 This made her instantly likeable; however… I never saw YoonA as the type of actress to pull off this kind of character. I’m still a little skeptical but she seems to be holding her own. She doesn’t exactly have it easy either – this is her first sageuk and she’s the only female lead, which can be a lot of pressure for an actress. There are plenty of upsides to Eun San’s character so far: she can hold her own with the boys, she’s clever, and has yet to show any dependence on the other male characters. Hopefully this keeps up.

Along with the main characters is an extended cast of nobles and palace workers. The king and queen play important roles (the throne is kind of a big deal); and a mysterious adviser named Song In appears to be aiding Wang Lin’s older brother in his conquest for the throne, but he definitely has his own agenda (hello, bad guy). There’s also a warrior working for the bad side who’s oversensitive about his snake tattoo, and the crown prince’s main bodyguards, who help Wang Lin at times, provide some comedic relief while they stalk the prince everywhere. 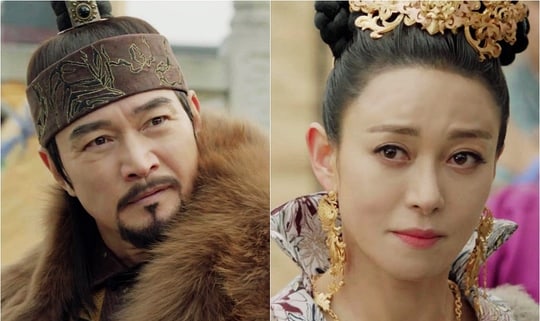 Production for a sageuk requires a focus on specific elements, such as locations and costumes. Many of the locations and palace shots used in “The King Loves” are very familiar, but when the prince ventures out of the palace, viewers get plenty of shots featuring Korea’s beautiful landscapes and scenery; from open fields to mountains. There was plenty of variety in the first couple of episodes, so the drama didn’t feel trapped in any particular setting (sometimes traditional dramas seem to only center around particular palace rooms).

While the scenery is beautiful, the drama’s costumes have also been interesting to see. Most of the costumes are based on social class, with colors marking the main characters and nobles. I find it interesting that the designer and stylists have stayed largely away from the usual red and gold used in most sageuks (those are the royal colors). Even in the opening scene, the king is wearing darker colors and his wife has a darker aura to her; it’s also very obvious by her jewelry and personal style that she is foreign – I didn’t even need someone to say something to know she was not originally from Goryeo. 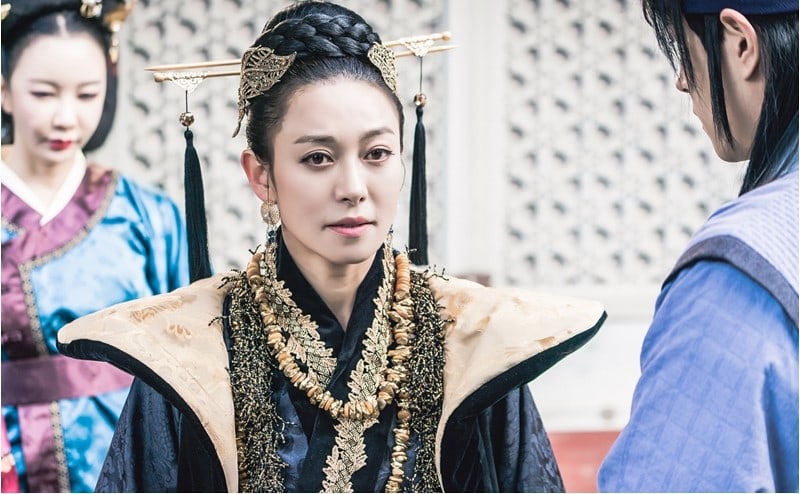 One thing that bothered me though (call me a stickler) was the amount of color in the outfits worn by the main leads when they’re outside the palace. Eun San’s outfit is impressively clean and bright for a girl who rolls around in dirt and is supposed to appear as a poor handmaiden. Eun San wears a very beautiful outfit at the end of the fourth episode, and it feels daring for someone who is hiding her identity. During another scene, some thieves in their pale, dirty clothes grab young Won and Wang Lin and assume they are boys from the town. It makes the whole thing a little unbelievable, even though the outfits are very, very nice. 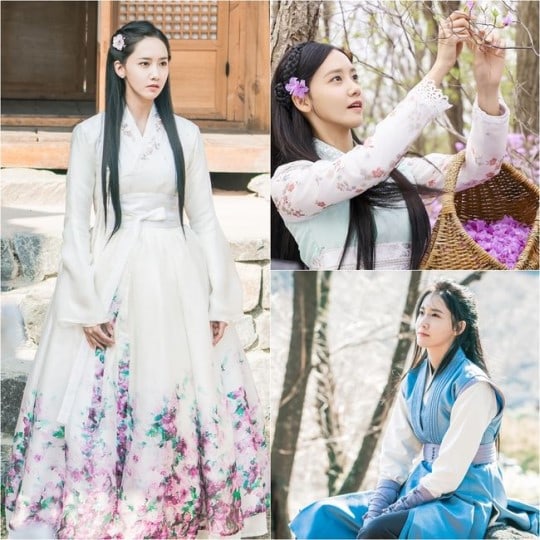 This is a personal thing, but I like it when drama staff pay more attention to details such as people being active in the background or the costumes matching social standing. “The King Loves” falls a little short of this, but there are several factors that could affect these decisions, such as money or the costume designer choosing to emphasize their role rather than accuracy.

The writing is very well balanced in the first four episodes; the action moves at a good pace but there are also plenty of slower scenes that tackle the relationships and the love story. It doesn’t drag and viewers still get plenty of insight into the characters’ internal struggles. 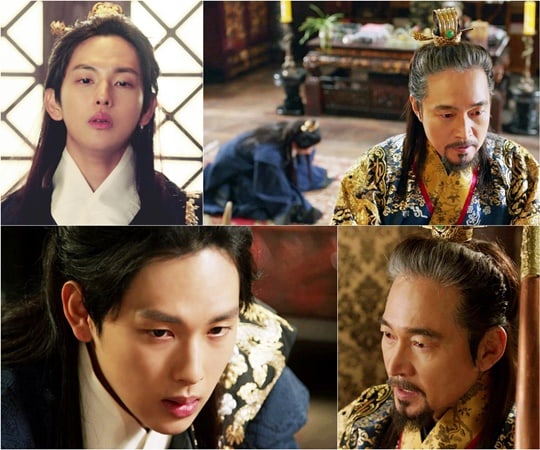 I’d also like to take a second to praise how “The King Loves” handled the flashbacks that provided the background for the story. Usually, before the main actors appear, traditional dramas contain a few episodes where the younger characters live through a tragedy that later defines them. However, this drama begins straightaway with the main actors, so there was no “when is Im Siwan going to appear? I’ve waited three years for a new drama with him…” The back-story did last into the second episode but it returned to the drama’s current time before it ended. Later events were explained in a few flashbacks that were interspersed in scenes instead of being crammed together. Many of these particular scenes were actually used in relation to Hong Jong Hyun’s character.

Wang Lin is a little more introverted than Won and has significantly less dialogue than the other two characters. The advantage to this is that Hong Jong Hyun, who has a naturally powerful presence, hasn’t over-powered Siwan and YoonA, both of whom have less experience in this genre. The disadvantage is that it’s harder to empathize with his story because he doesn’t really share his feelings with other characters and stays off to the side during a lot of group scenes.

However, several of the flashbacks I mentioned earlier include voice-overs by Wang Lin and even show previous events from his perspective, such as how he saw Eun San during a personal moment and witnessed her in mourning before Won interacted with her shortly after. Viewers get two different ways of learning about the male leads – one through his own words and the other through flashbacks of the things he’s experienced.

At this point in time, I find the characters’ internal struggles more interesting than the love story. I look forward to seeing how each character develops but also seeing Song In’s role in the chaos of palace politics. Villains who are good at scheming are always fun to watch. Plus a little more bromance would be nice (although there is a touching moment at the end of the fourth episode). 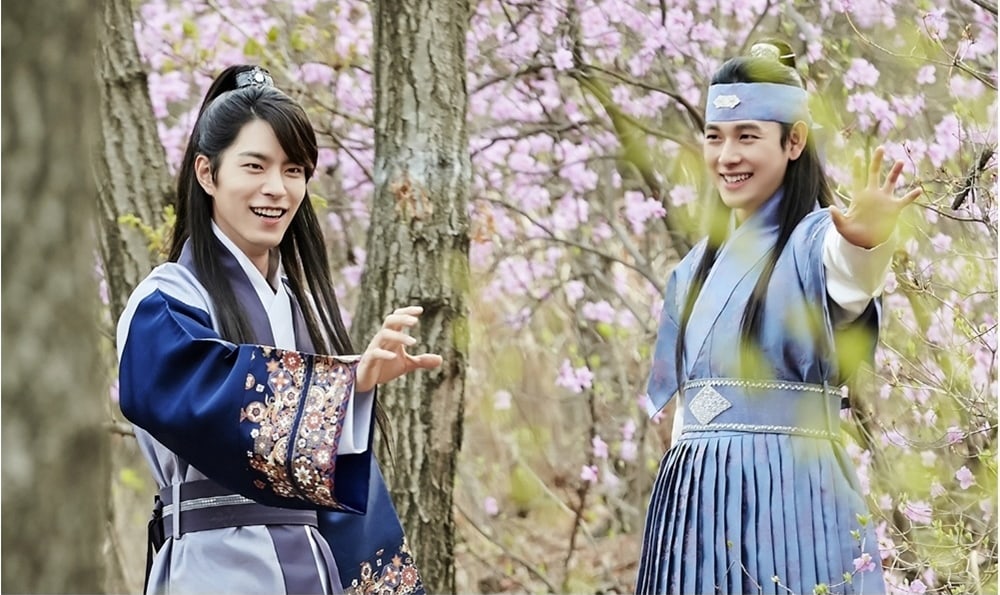 What are your thoughts so far on “The King Loves?” What are you looking forward to seeing in this drama? Let us know in the comments below!

“The King Loves” airs every Monday and Tuesday. Watch it at Viki!

heytoto currently teaches ELL in Seoul, South Korea and can usually be found sipping a latte while wondering what Siwan in a sword fight would look like…