Former 9MUSES member Lee Sem has publicly called out a group member for their manipulation right before their reunion performance on MMTG.

On her Instagram story, Lee Sem uploaded a post, calling out one of the group’s members for their manipulation behind the scenes. 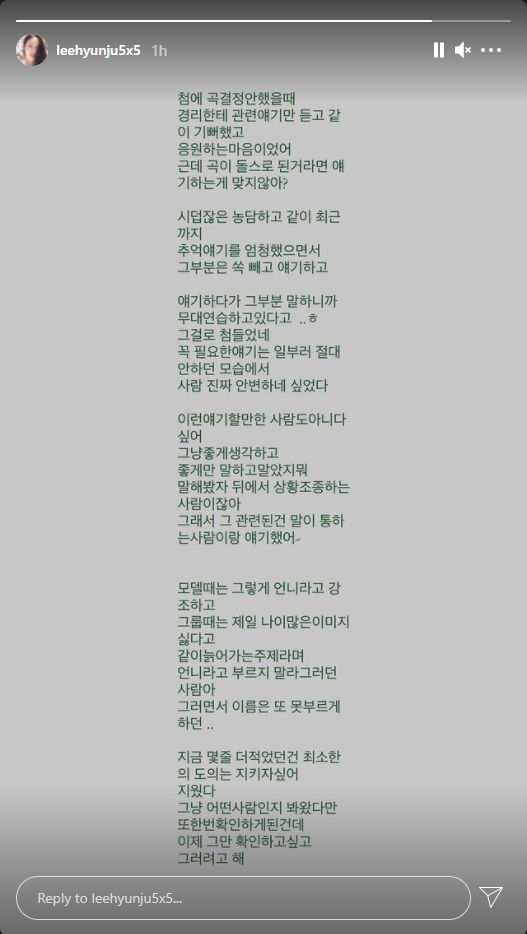 At first, when the song wasn’t decided yet, I was happy to hear about [the reunion] from Kyungri (Gyeongree) and I was cheering her on. But if the song that ends up being chosen is ‘Dolls’, isn’t it right to tell me?

We talked a lot about our past memories together and joked around, but that part was completely left out. When I brought it up, you said you’ve already begun practicing for the performance, but that was the first time I’ve heard anything about [practicing]. That was the first time I heard about it. I thought that you really didn’t change at all, after purposely leaving out something that I definitely should have been told.

Now I’m thinking that you aren’t even worth talking about. You always just stop at the convenient timing for you and say things that are convenient for you. Even if I said something, you would manipulate things from behind the scenes. So I just talked to someone else, who I could actually properly talk to.

When we were models, you insisted that you were the older one. However within the group, you didn’t want the image as the oldest member, so you wanted to say we were growing older together and told me not to call you ‘unnie’. But you wouldn’t let me call you by your name either..

I wrote down more, but for the sake of manners, I deleted them. I already knew the kind of person you were, but now I’ve confirmed it once again. I think I would prefer to stop confirming it from now on.

Moon Hyuna recently uploaded a picture of the 9MUSES members who will be participating in the reunion performance. The either members, from left to right, are Sojin, Hyemi, Minha, Euaerin, Hyuna, Kyungri (Gyeongree), and Keumjo. Sungah, who is not pictured, will also be participating.

Lee Sem’s frustration also comes from the fact that “Dolls” was released in 2013 when she was part of the group, but the lineup that is performing the song is from 2015. 9MUSES is slated to perform on the upcoming episode of MMTG, which will be released on June 11, KST.