Former AOA member Kwon Mina has just posted a graphic photo of her self-harm wounds, calling out haters who continue to attack her.

Mina posted a photo of her injury. While it is unknown when the photo was taken, she attached a caption calling out the haters who continue to send her malicious messages. 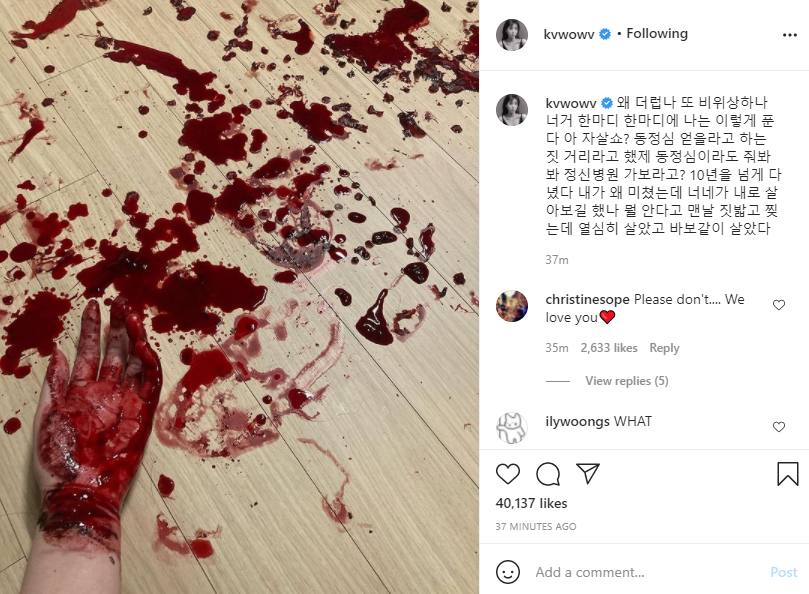 Why, is this dirty? Does this make you feel squeamish? Every word you say makes me end up doing this. A suicide show? You just say it’s to get some sympathy. Then give me some of that sympathy.

Go see a psychiatrist? I have been seeing one for over 10 years. Do you know why I have gone mad? Have you ever lived a day in my shoes? You don’t know anything about me, but you still keep stepping all over me and ripping me apart. I’ve been trying my best, but I’ve been living like a fool.

Back in July 2020, Mina uploaded a post claiming that the AOA members bullied her during her time in the group. She continued to make posts targeting AOA, specifically Jimin, Seolhyun, and FNC Entertainment‘s CEO. Even months following the initial accusations, Mina has been receiving messages claiming she is doing all of this for attention.