The road to debuting as a K-Pop idol is long and hard. No one knows this better than idols themselves, and Minu from STARSHIP Entertainment‘s now-disbanded group, BOYFRIEND, is one of them.

Though it differs per company, many of them finalize the members of their group through a weekly test.

Once the date for debut is set, they need to decide the members. Then a monthly test is not enough. Another test program, weekly tests, is done. 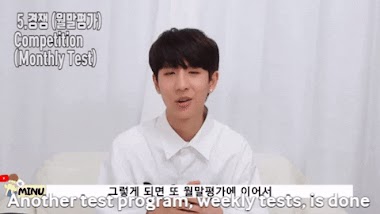 STARSHIP Entertainment randomly divided their 12 trainees into two teams. Minu led one of them while eventual leader Donghyun looked after the other.

The weekly test is done by the trainees where we film our performance ourselves and submit the files to the manager.

Considering how it was the final barrier before becoming an idol, they worked doubly hard. It was especially tiring for the group leaders considering their responsibilities.

Within each team of six, we prepared a song for the group and one individual song. I was terribly busy then. That’s when I grew so much so fast. 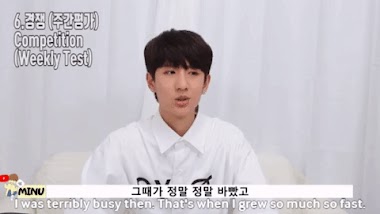 Every step of the process was important and they needed to devote twice the usual amount of effort for that stretch of time.

You’ve got to decide a song, divide the parts for group singing, practice dancing, and everything else. And since it’s two groups competing with each other, you want to win it anyway. 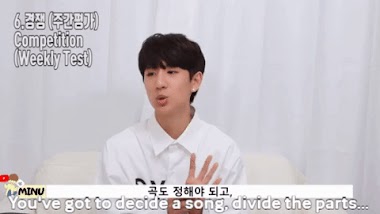 Though they already practiced for most of the day during normal conditions, the weekly tests made them commit almost every second to training.

I remember I used to practice every day and night.

It was so difficult, Minu claimed, “It was the hardest time of my life.”

To learn more about what goes on behind the scenes of trainee life, check out the full video below!