On the December 17 episode of MBC’s “King of Masked Singer,” four contestants appeared to challenge “Red Mouth” in their quest for a second consecutive title.

After the performance, panelist Jo Jang Hyuk said, “He is definitely a singer. His singing method takes me aback and he puts everything on the line. It’s a voice that makes hearts race.”

Unfortunately, “Dream Catcher” ended up winning the round. When “Art School Oppa” was unmasked, it was no other than former “Produce 101 Season 2” contestant and solo singer Jeong Sewoon. 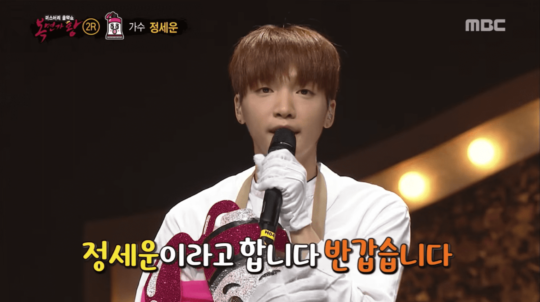 Yoo Seung Woo, one of the panelists and Jeong Sewoon’s labelmate at Starship Entertainment, had recognized early on that it was Jeong Sewoon behind the mask. After the reveal, he said, “There’s so many things Sewoon does well. He has a calm personality so he’s good at bowling too!”

After taking off his mask, Jeong Sewoon said, “It hasn’t been very long since I debuted. I worried that no one would recognize me. Thank you for cheering for me.” He added, “It was such a new experience and I had fun. I hope to grow even more in the future.”

You can watch the latest episode of “King of Masked Singer” below: