f(x) member Luna talked about the process of making her new music!

On April 24, Luna held a broadcast on Naver’s V Live to celebrate the release of her new digital single “Night Reminiscin.’”

Luna was joined by singer-songwriters Choi and Yoorim.  She began, “It’s my first solo comeback in two years. Many fans waited for a long time. I wore a purple outfit today which signifies f(x). I know that fans are waiting for us. I will return with f(x) so don’t worry. Please give lots of love to my solo track as well.”

The singer also shared stories from working on her music and how her newest title track was created from her diary. She said, “I have a habit of writing in my diary. After I had a meeting for ideas about my song, I couldn’t fall asleep. Instead of sophisticated songs for modern people, I wanted to listen to songs that awaken my senses and comfort me. So, I showed my diary to my friend who I was working with on my music.”

During the show, she revealed her jacket photos and gave them creative titles. Luna was full of positivity when she accidentally dropped the cake. She commented, “I guess we’re going to be really successful. I think ‘Night Reminiscin” is going to be a huge hit.” 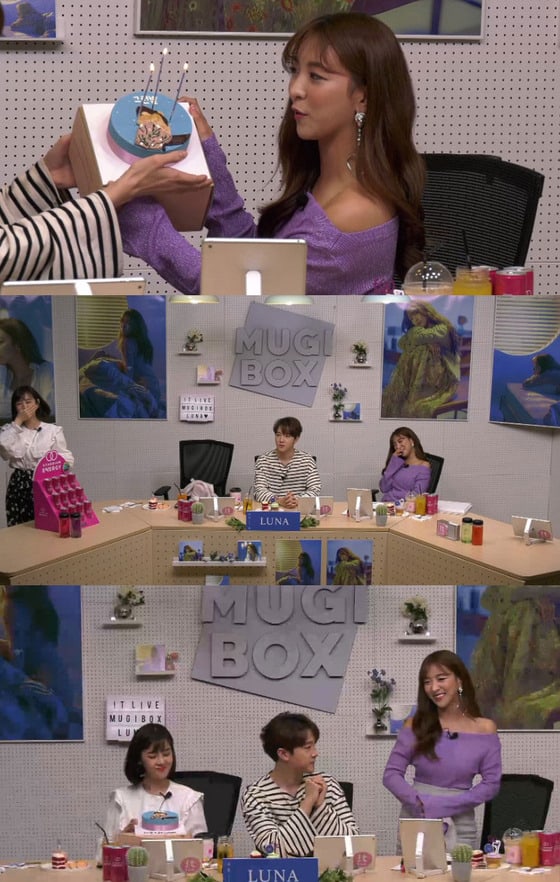 She introduced her new track to her fans and said that it’s a song where people can listen to the harmony of herself and singer-songwriter Yang Da Il. Luna added, “I thought a lot about who to do the duet with. As I expected, Yang Da Il did a really good job. I think she added emotions that I don’t have. I’m really thankful.”

The f(x) member also shared a behind-the-scenes story from filming her MV. Luna said, “I cried a lot while filming because I was listening to ‘Night Reminiscin.” The director asked for me to portray the restrained feeling right before crying, so I tried not to cry.”

Luna participated in composing and writing the lyrics for both songs on the single. She commented, “I’m so happy I released new songs and am more happy that I could let you guys listen to my self-written songs. Victoria, Soo Jung [Krystal], and Amber, are you watching?”

She continued, “I was curious what your thoughts would be once my album came out. After seeing you guys like it, I’m really happy and proud.”

Luna shared the reactions from her fellow f(x) members. She said, “The members gave me lots of support before my comeback. Amber also recently released songs and I listen to them a lot. I wasn’t able to hear their reactions after the songs were released because they’re overseas.”

Luna’s single, comprised of songs “Night Reminiscin‘” and “Falling Out,” was released on April 24.