Gagman Park Dong Geun has caught fire after being caught calling Busters‘ Chaeyeon, who is only 15-years-old, a bitch and a prostitute.

Park Dong Geun and Chaeyeon are part of the cast of EBS program Tok! Tok! Boni Hani, along with Choi Young Soo and others. Yesterday, a video clip went viral showing what appeared to be Choi Young Soo violently punching Chaeyeon in the arm.

turn up your volume.
this actor, one of chaeyeon’s coworkers choi youngsoo, appeared to have hit chaeyeon. no matter if chaeyeon pulled him over or if they’re friends, that is incredibly out of line. #RespectChaeyeon pic.twitter.com/IqCWNdfRxs

Following the clip going viral, both EBS and Busters’ agency denied that there was any malicious intent in the interaction, simply claiming that the two were just joking around.

There was no violence amongst the cast members that many people are concerned about. There is no possibility of violence occurring on a live broadcast when so many people are working together. What some media outlets are reporting as violence or physical contact is not true. This is a fact that we can state after confirming with the cast and the staff on site.

After confirming with her, it was just a simple joke between them. There was a misunderstanding, but there were no acts of violence.

Chaeyeon: Right now [it does]?

Park Dong Geun: Hani, you must be happy~ For being on broadcast with Boni~ Boni is handsome and nice~ But you…

Chaeyeon: What kind of response do you want to hear…?

Park Dong Geun: You are, you are a Listerine sterilized bitch.

Chaeyeon: A sterilized… what?

Park Dong Geun: Heh bitch? Nyanchu~ (appears to be some kind of slang).

Park Dong Geun’s comments are already crossing the line, however a bit of a deeper look into his comments show that they hurt even more than they appear to be. The term “Listerine sterilized bitch” comes from Korean red light district slang, where it means that prostitutes would rinse out their mouths with Listerine prior to performing oral sex on a customer. The sterilized part refers to how their mouths would be clean prior to performing their acts.

In response to this, EBS denied such meaning for these words coming from Park Dong Geun.

There is always Listerine at the waiting room. Chaeyeon, who is an MC on the show, always rinses her mouth with Listerine before the show.

During the live broadcast, those words were just said as a joke to tease her, but neither the production team nor Park Dong Geun knew that it was such a problematic expression.

EBS’s apology still didn’t appease netizens, who were still furious that such comments could, firstly, be made on live broadcast and secondly, be made towards a 15-year-old girl. Finally, in response, EBS President Kim Myung Joong released a statement, apologizing on behalf of the company and suspending the 2 cast members involved in the controversies. 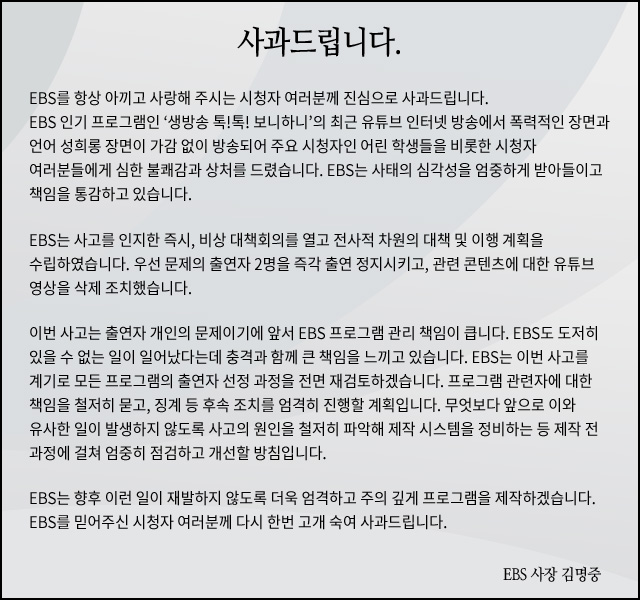 We would like to sincerely apologize to the viewers who have always sent their love and support to EBS.

On the internet broadcast for EBS’s popular program ‘Live broadcast Tok! Tok! Boni Hani’, scenes of violence and sexual harassment language were broadcast without any awareness, causing a lot of displeasure and pain to our audience, including to the young children who are our primary viewers. We at EBS recognize the severity of the situation and we take responsibility for the incident.

As soon as we recognized the incident, we held an emergency meeting and developed a company-wide plan of action for countermeasures. This included the first steps, which were to immediately suspend and remove the two cast members (Choi Young Soo and Park Dong Geun) who were involved, and deleted the video off of our YouTube channel.

The accident is not just a matter of the individual’s personal problem, but also reflects on EBS’s program management and responsibility. EBS also is shocked as something we though would never happen, did happen, and we take responsibility for that. With this event, EBS will review the selection process for all of the people appearing on EBS programs in the wake of this incident.

We will thoroughly hold those involved accountable, and apply strict follow-up measures such as disciplinary action. Above all, we will work to thoroughly identify the cause of this incident and overhaul the system to prevent any similar incidents from occurring in the future.

EBS will be more strict and careful in the production of our programs to prevent something like this from ever happening again in the future. I would like to apologize once again to everyone who trusts in EBS.