To celebrate the release of their sixth mini album, GFRIEND held a showcase on April 30 that was aired live on Naver’s V Live.

During the event, the members watched the music video for their new title track “Time for the Moon Night” with fans and shared behind-the-scenes stories. Sowon said, “Our new music video is a fun one to theorize about. Every person will have a different interpretation, and I think that’s what makes it fun.” Yerin agreed and added, “I was watching our fans’ reaction, and I think many of them reacted in a way that we were hoping for.”

They went on to share interesting stories from filming the music video as Yuju said, “There’s a scene where I hold a flower vase and walk up a hill. People who know me will know that I’m really bad with directions. I had to walk up the hill, but I had no idea idea where I was going so I got lost. But I saw that me wandering through the area was included in the final version of the video.” 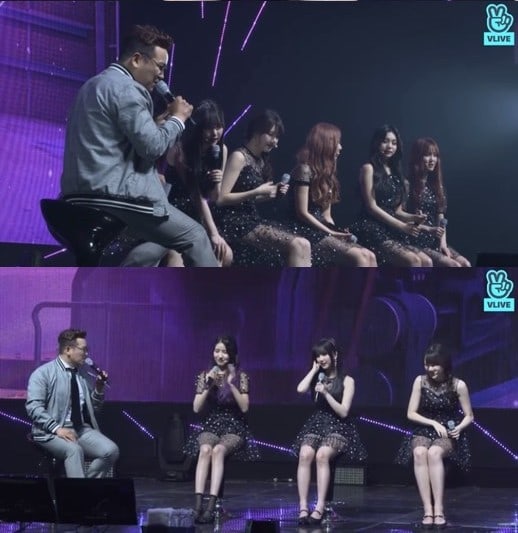 Yerin shared, “There was a scene where I had to cry. At first, I told myself that I needed to look pretty while crying, but that’s not an easy thing to do,” and “A lot of people told me that they teared up watching that scene. So I felt happy about my acting.”

Sowon said, “In the music video, there’s a scene where I kiss Yerin’s head. I’m supposed to be giving her a comforting kiss but it looks like I’m smelling her hair.” She laughed as she added, “It was so strange to be kissing her on the head like that. And Yerin kept laughing, which made filming the scene difficult.” Yerin explained, “I kept laughing because I could feel her breath approaching me before she kissed my head. It’s supposed to be one of comfort, but we’ll leave it up to your interpretation.”

GFRIEND made their return on April 30 with the release of their mini album and the music video for their new title track “Time for the Moon Night.”