(G)I-DLE‘s Yuqi was accused of saying a “colorist” statement during their recent live broadcast. When Shuhua claims she wants to be a police, Yuqi responded, “If you want to be a police, your face needs to be darker. When you catch criminals at night, your face will stand out.”

This is sad :/ and so disappointed. But this is when the colorist comment from Yuqi happens. It has no subs but those who know Korean will understand. #gidle #yuqi pic.twitter.com/IudKwOFzme

However, a fan account had summarized her comment to a phrase that could be misinterpreted as a colorist or racist joke. Yuqi was soon criticized for the misunderstanding.

After the controversy spread widely among (G)I-DLE fans, the fan account realized their mistake and uploaded a sincere apology.

They explained that when they first uploaded the post about Yuqi’s comment, they knew she was not being racially prejudice.

I decided to tweet about this exchange, even after a bit of hesitation. The reason was because although it mentioned skin color, it was very clear to me that the words did not come from any kind of racial prejudice.

They acknowledged that their quick summary and translation delivered the wrong message and caused a misunderstanding.

While Yuqi’s comment, spoken in Korean, had very little froom for misunderstanding, I later realized my translation was not.

There are two major, regrettable mistakes I made in tweeting this. The first is my sloppy translation. The tweet I made was a crude summary of Shuhua and Yuqi’s exchange, put in the simplest way possible. It was not even a word-by-word translation, and I chose to put it in terms like “skin color”, “dark”, “white” based on the short term memory I had on the conversation.

Being one of the quickest to translate the Vlive, I thought it would be okay to deliver a general idea of what was going on, instead of doing subtitle-worthy translations that would eventually be provided later by other fans.

They emphasized that all accusations of Yuqi being a “colorist” or “racist” are untrue and that the sole fault laid on their carelessness. 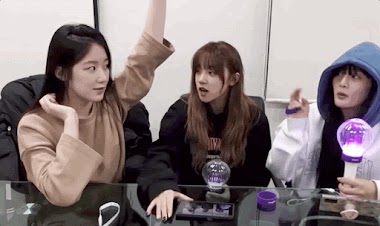 My carelessness eventually brought about certain interpretations that Yuqi was making a racist remake, and I desperately wish I had gone over the original video, revised my words a bit more to reduce any room for misunderstanding because such accusations against Yuqi are absolutely untrue.

They also explained that they lacked consideration when quickly posting the tweet as they did not fully take into consideration the international communities that would be affected by the misunderstanding.

My second mistake is lack of consideration. I did not think deeply enough to expect that the simple mention of skin color would automatically be regarded as problematic to the international communities.

Lastly, they apologized to Yuqi, the fans, and everyone who was affected by their original post.

I apologize to Neverland who had to see negative comments about Yuqi who only deserves to be loved. I apologize to those who work hard every day to sustain the positive image of (G)I-DLE.

Finally, I apologize to Yuqi who is being criticized not for what she has done, but for my wrongdoings and carelessness. 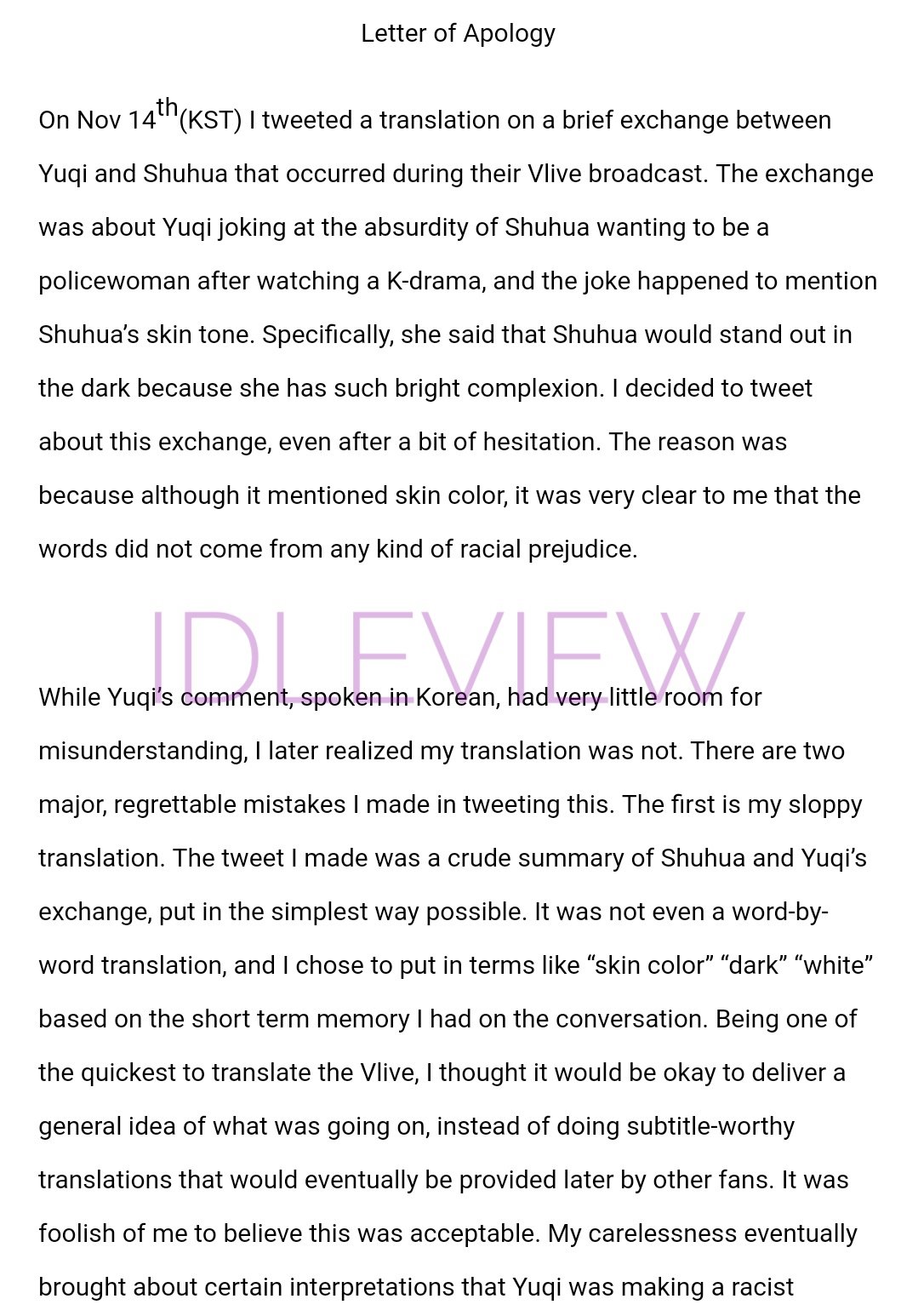 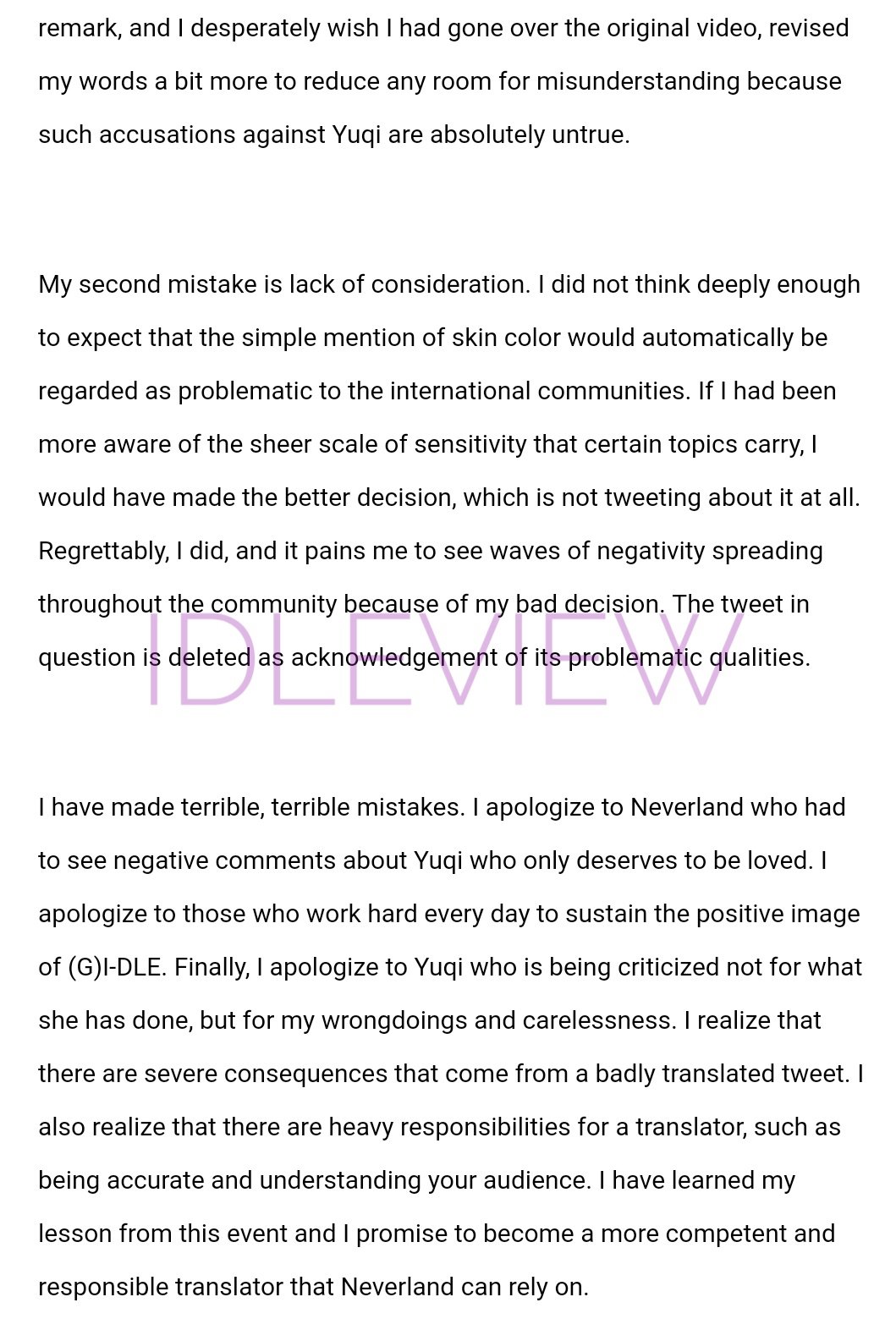