Recently debuted girl group 1NB has announced that they will no longer be promoting together.

1NB members Hajung and Jayeon told fans directly through a V Live recently that they had heard only a few days before from their company that they will now be doing solo activities rather than activities as a group. Jayeon said, “To the people who have been waiting and looking forward to our album, we are very sorry. We are still very upset too, since it hasn’t been long since we found out.” They promised that they will still be seeing fans in the future through their individual activities.

On April 27, member Shinhye posted to the group’s Instagram with a message of thanks to everyone and support for the rest of her members. When fans asked for clarification in the comments about what the message meant, someone using the official account replied, “We [are] still in a company but we [are] just no longer a group.”

Thank you for every people who always be with us, i will work harder since im the one of 1NB member now. Fighting !!! #원앤비 #1nb #신혜 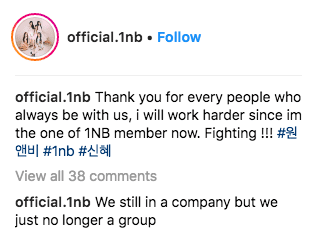 1NB made their debut in November of 2017 under the agency Trivus Entertainment, when they released the song “Where U At.”