Girl’s Day member Minah took some time out of her busy schedule to chat with fans, sharing about how she voted and even about her solo album that’s soon to be released.

On April 13, Minah did a live broadcast on the Naver V app and despite her sore throat from a cold, she spoke with her fans about how she had been spending her day. She revealed she had just finished a script reading for her drama “Beast’s Beauty” and was now at a dinner party with her cast mates.

She also shared about the Korean elections, saying, “Before my schedule this morning, I went to vote. I personally listened to what announcer Sohn Suk Hee had to say and I decided and cast my vote.” 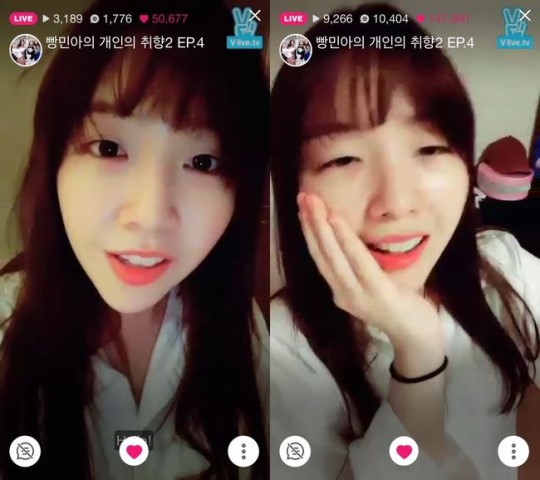 Minah also revealed that she is living by herself now, but she added, “After living by myself, it’s lonely. My mom keeps saying to live together these days, but I’m at the age now where I want to have my own time. Maybe I’m entering puberty a bit late.”

The topic of her solo album also came up, with Minah asking the fans to wait a bit longer so she can create an album of high quality.

When asked to pick the member that she felt sorry towards, she picked Sojin, saying, “I’ve been promoting with her since I was young and she really raised me. I think that would have been difficult to do so I feel sorry to her.”

A funny moment came when a fan mentioned that she looked like Song Joong Ki and Minah then impersonated the actor’s voice on the drama “Descendants of the Sun.”