Though the popular JTBC drama, Run On, has come to an end, it seems that the friendships made while filming will continue! In a recent interview, Run On’s Girls’ Generation‘s Sooyoung shared details on her relationship with fellow castmate and actress Shin Se Kyung. 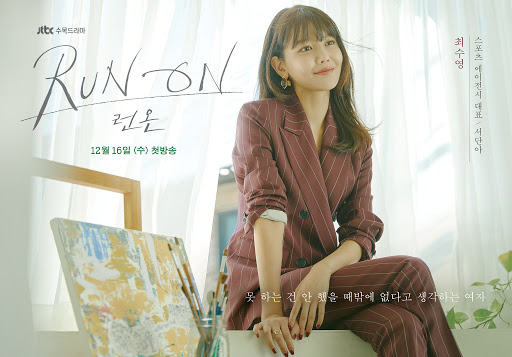 Within the drama, the two are a complicated pair as they started off a bit rough. Despite the shaky start, the two female characters progressively developed a closer friendship that fans definitely adored.

In her interview, Sooyoung expressed her admiration for Shin Se Kyung as both a friend and a talented actress.

Se Kyung is a friend and actress who I really admire. Even before working together, I had respect for her as an actress. She is a senior actress who has done several more projects than I have and a female actresses who has stood her ground without any major issues. I find her respectable and in a way makes me feel proud of her. In ‘Run On,’ Shin Se Kyung really enjoyed my humor and was open to my ideas and jokes a lot.

Sooyoung went into further detail and discussed how she looked up to both Shin Se Kyung and her character, Oh Mi Joo, in Run On.

Now that we’ve acted alongside each other, I see that she has points she wants to emphasize yet is still flexible. Despite being very focused, she still looks out after those around. I think I learned a lot while observing Se Kyung in the field. I say that Oh Mi Joo is the best female main character. Coming as a viewer and actress, I was very satisfied how Se Kyung played Oh Mi Joo. She is an actress who I always want to give a big applause to.

The two are obviously supportive of one another and fans are loving the cute friendship offset! Whether in a drama or just out as friends, fans hope to see more of these to cuties!

NCT’s Doyoung Gets Embarrassed During A Photoshoot, But Jungwoo Reassures Him

TXT Reveals Why Yeonjun Is Beloved By Older People