Go Ji Yong took on the challenge of looking after four children on KBS2’s “The Return of Superman.”

On the May 20 episode of the show, Lee Dong Gook‘s three children, Seol Ah, Soo Ah, and Si An visited Seungjae for the day. Go Ji Yong shared, “When Seungjae visited them last time, Si An’s father looked after Seungjae. Since then, Seungjae often said he wanted to go visit Si An’s place. Si An’s father had a game just then, so I came to look after the four kids.”

Go Ji Yong first played a game of hide-and-seek with the children. Known for his earnest personality, Go Ji Yong failed to play along to the children’s game, and instead of pretending not to see the hiding kids, he immediately found them, much to their disappointment.

Si An and Seungjae also went out together to play. When Si An asked Seungjae if he had a friend, he replied, “Si An is my friend.” The two built on their friendship as they enjoyed swinging at a playground. When Si An appeared scared at the top of a slide, Seungjae encouraged him, saying, “Si An, you can do it. Trust me and come down.” Si An finally slid down and the two showed affection for each other.

Meanwhile, Go Ji Yong was preparing a meal for the children at home. He began cooking Korean noodles but became overwhelmed when he accidentally boiled 30 servings of noodles. Fortunately, the children all enjoyed the dish that he put so much effort into. When Seungjae complained about the food, Si An, Seol Ah, and Soo Ah teased him about his height. After hearing this, Seungjae ate much more than he usually does. 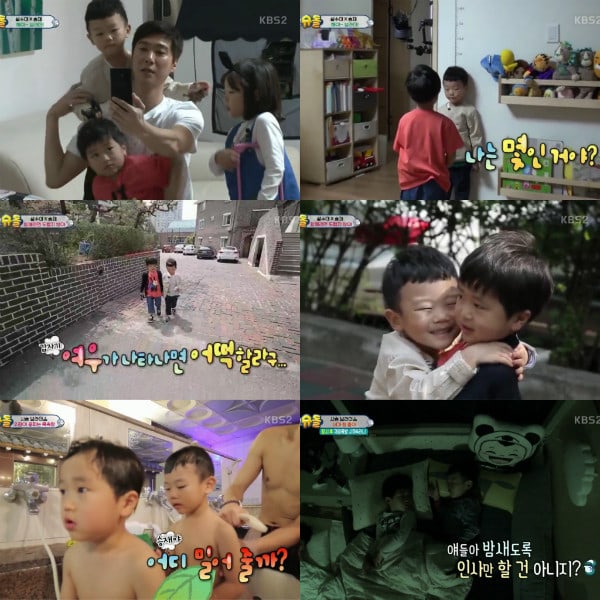 After the bath, Si An and Seungjae dressed up in matching dinosaur pajamas and enjoyed boiled eggs. The two even switched their pajamas while dressing up, and wrapped up their happy day by coming home and chatting in bed.