After SEVENTEEN‘s Joshua and DK collaborated with Pink Sweat$ last year on the remix for “17”, it looks like GOT7‘s BamBam may be the next K-Pop idol the American singer works with.

Through BamBam’s Twitter, he dropped a mysterious announcement a few days ago revealing he currently has something in the works. Even though he didn’t reveal any details on what that might be, another hint had Ahgases putting the pieces together.

In a recent post to his Instagram story, he shared a photo of a pink light bulb along with a pair of headphones and a speaker. After the initial confusion his “NOOS” caption caused, fans soon realized it read “SOON” when flipped, raising the anticipation for new music.

The pink lighting wasn’t the only reason fans thought it could mean a collaboration with Pink Sweat$.

In an interview with Tero Radio a few days ago, the station asked Pink Sweat$ if there were any Asian artists he wanted to collaborate with. He mentioned that he and Bambam stay in contact with each other and have mentioned collaborating.

I want my boy BamBam. He’s from Thailand. Yeah, he’s in GOT7.

We be texting, talking about doing something together. Hopefully, it happens. 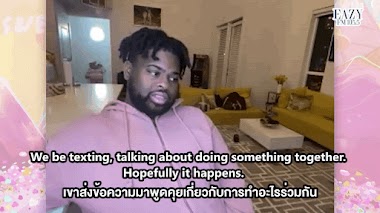 Since Mark collaborated with Sanjoy for “One in a Million”, BamBam’s collaboration with Pink Sweat$ would be just as special for fans.

Until BamBam officially reveals his next project, he’s not the only one that’s feeling impatient like the hilarious tweet he recently shared.

Whatever BamBam has in store, fans will be right there to support him—especially if it’s the long-awaited collaboration with Pink Sweat$.