GOT7‘s BamBam has instigated a friendly competition with Jay B (JB), and it’s just getting started!

In February, BamBam shared a video of his workout on Twitter. Jay B simply replied, “Wow.” This provoked the maknae to challenge the leader to exercise too.

Not only did Jay B accept the challenge, but he’s also crushing it! Just a couple of months later, Jay B is now ripped. He clapped back at BamBam as he updated his Instagram with his workout progress, showing off his broad shoulders. Directed at BamBam, he said, “What?”

More than ever, BamBam is ready for battle. Shortly after Jay B posted, BamBam updated his Instagram Stories with a picture of himself flexing his muscles.

Oh~ what’s up with my shoulders? I work hard at it even in quarantine. Should we square up some day?

BamBam still has a lot to say! He also brought it back to where it all began: Twitter. With BamBam’s remark, Jay B kept his cool and replied, “Come on.”

Jackson revealed that, like the rest of us, he was enjoying the show. Nonetheless, an Ahgase suggested that rather than sit back, he join the competition! 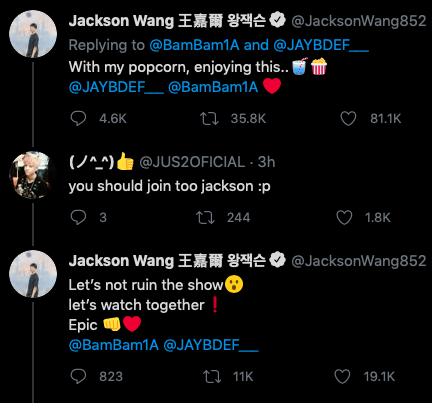 Don’t be shy, Jackson. We know you’re more than worthy of a competitor.