The GOT7 members are extreme savages to each other, as they are always teasing each other on camera. 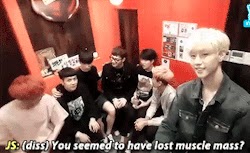 The group recently guested on WA LALLA‘s Big Picture, and during it, BamBam made a savage comment towards JB.

It began when JB got asked what his favorite hairstyle has been.

JB shared that his long hair was the most meaningful since it was a new challenge for him.

BamBam then commented that “anything would look good if you’re good-looking.”

However, JB gave a humble statement, as he said that he doesn’t think that he’s good-looking.

After JB said this, BamBam gave a savage response, as he told JB that he was talking about Mark. The members couldn’t help but laugh once BamBam made this savage comment.