On the December 12 episode of “Stray Kids,” the members of GOT7 came to show their support to the Stray Kids trainees.

In particular, BamBam visited the workshop of Bang Chan, his former training mate and longtime friend. To support Bang Chan, who was up early to work on music, BamBam took him out for a meal and the two of them talked about their past trainee days, like the time they and Yugyeom “snuck out” to the Han river and skateboarded. (BamBam claimed they’d gotten permission and asked Bang Chan if he snuck out often, to which Bang Chan retorted that BamBam, Jackson, and Mark were the ones that often snuck out.) 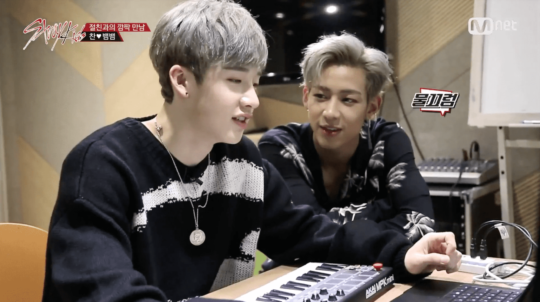 The talk then turned to Stray Kids, of whom Bang Chan is the leader. Bang Chan praised his members and BamBam said, “It’s important to control [the team] so that one member’s mistake doesn’t impact the rest of the group. As long as you do well, they’ll do well too.”

Bang Chan confessed that he feels a lot of pressure as the leader and shared his ambition to be a dream that feels like a family, that makes their own songs and choreography. BamBam then offered him lots of encouraging words and Bang Chan said, “I feel stronger now that I’ve seen you.”

In a separate interview, BamBam said, “When I see [Bang Chan], I think to myself, ‘We’ve really come a long way, the two of us. He’s been through a lot.” In his own interview, Bang Chan said, “The person who understands me the best is BamBam, I think. After I succeed, I want to meet him again like this.”