GOT7’s Jinyoung Describes How He Prepared For “He Is Psychometric”

GOT7’s Jinyoung talked a little bit about his character in “He Is Psychometric,” an upcoming supernatural romance thriller from tvN.

The drama is about a boy named Ian (played by Jinyoung), who can read the secrets of a person or item via physical touch, and a girl named Yoon Jae In (played by Shin Ye Eun), who holds a secret close to her heart.

Jinyoung’s character, despite his perfect looks, is decidedly imperfect otherwise. He’s not the smartest kid on the block, and, unable to fully control his abilities, he is more bark than bite.

Jinyoung said, “The subject of psychometry was what first caught my eye. When I was younger, I often imagined what it would be like to have different kinds of powers and wished I had the abilities that I saw in comics and in movies.”

“Looking back, all of the characters with powers were heroes,” said Jinyoung, “but in this drama, Ian is a normal person that you might see around the neighborhood, and that was a fresh and charming point of the drama that drew me in.” 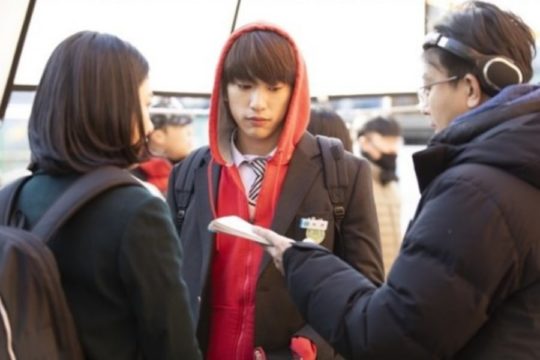 Though he heard there was a movie about psychometry and looked it up, Jinyoung said he decided not to watch it. “I thought I might get confined by the ideas in the movie.”

He continued, explaining how he approached the process of playing a character with powers. “Ian has had his psychometry powers for quite some time. I felt that if I thought of the powers as something special, it could seem artificial. So rather than a supernatural ability, I tried to think of it and portray it as just another habit.”

“I also asked the people around me if any of them had ever been shocked by electricity before. I wanted to add details in my hand movements to portray the feeling that Ian gets when he reads an afterimage with his psychometric powers.”

Because of the nature of his abilities in the drama, his hands get a lot of screen time. Jinyoung said, “I used a lot of hand cream. It’s a little awkward, but with the intention of taking better care of my hands, I’m also using cuticle oil (laughs).”