On December 26, gugudan’s Kim Sejeong and Haebin held a V Live broadcast to mark the end of the year. 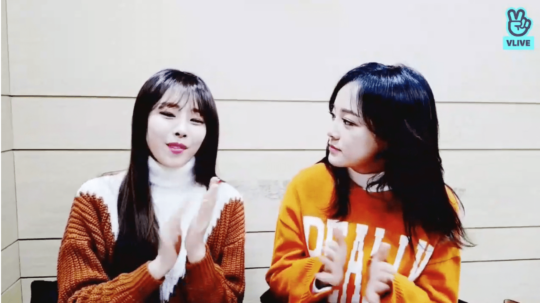 During the show, Kim Sejeong clarified some comments she had made on a prior appearance on SBS’s “Fantastic Duo 2.” She said, “When I appeared on ‘Fantastic Duo,’ I said that I wanted to sing as a hobby and it seems that many people misunderstood my words.”

She continued, “When I said that, I didn’t mean that I really wanted to sing just as a hobby, but rather that when I think of something I love as ‘work,’ it could become more tiring to do.”

She added, “I love singing. I want to sing without worrying about ranks or charts. The life I want to lead is to not be tied down by anything and be able to sing ‘for real.’ I want to become an all-rounder that can work in many different genres.”

You can check out Kim Sejeong’s “Fantastic Duo” appearance below!