HaHa Talks About Wanting To Have A Daughter

HaHa has revealed that he wants another child!

At one point during the show, HaHa and Park Joon Hyung talked about children over dinner. Park Joon Hyung has a 16-month-old daughter, while HaHa has two sons who are two and six years old respectively. Park Joon Hyung shared that he was already worrying about his daughter’s future boyfriend.

HaHa responded with envy, saying, “I want to have a daughter, too, but I can’t have one because I’d feel sorry to my wife. Because I know how hard it is [to give birth to a child and raise her].” 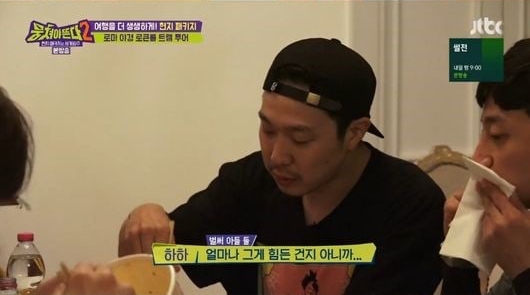 “Carefree Travelers” is a travel variety show in which celebrities travel around the world through package tours with other participating tourists. The second season, which premiered on October 27, features Park Joon Hyung, SECHSKIES’s Eun Ji Won, Sung Hoon, and Yoo Seon Ho as fixed cast members.