In drama “Moonlight Drawn By Clouds,” actress Han Soo Yeon plays the role of Queen Kim, who plans to seize power by making her own child king. Park Bo Gum plays the Crown Prince, Lee Young, who is direct conflict with the queen.

Queen Kim and Lee Young have already shown conflict with each other in the second episode, foreshadowing a continued strife and discord between the two. Queen Kim, who has to some how get rid of Lee Young, expresses the challenge and her resolve to do so through her emotions.

Han Soo Yeon comments, “Park Bo Gum is really nice. He is friendly and respectful to all other actors and staff on set. I can’t bring myself to hate this nice kid.” 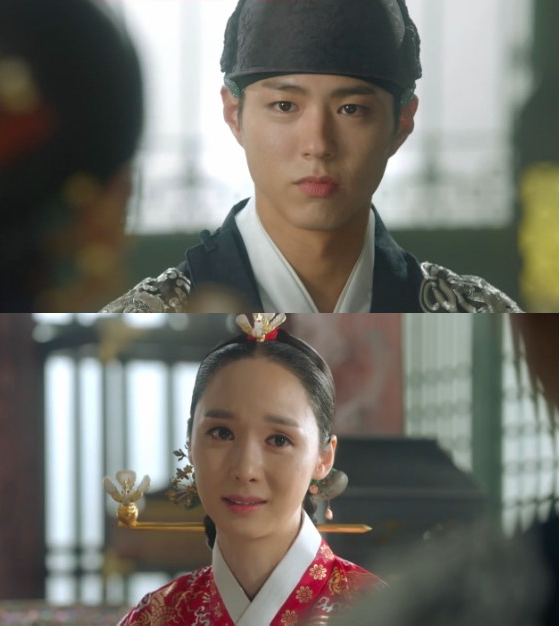 She adds, “I have to act as though I hate him while filming, but it’s difficult to capture those emotions. When we’re filming, I have to immerse myself into the emotions of the drama, but there are times I am unable to because of his personality.”

“It’s twice as hard to act with Park Bo Gum than anyone else. It’s because I have to hate him, but I can’t. So I purposely distance myself from him before filming starts and think to myself ‘I hate him.’”

“There are a lot of young actors that star in ‘Moonlight Drawn by Clouds,’ and they are all doing well. Not only Park Bo Gum and Kim Yoo Jung, but also Jinyoung, Kwak Dong Yeon, etc. Also the more senior actors such as Kim Seung Soo and Chun Ho Jin are working hard with their characters as well.”

“Because of the actors’ hard work, viewers are watching with interest. I will also try my best until the last episode. My goal is to receive praise that I’ve successfully done my part as a villain. Please watch the drama favorably.”

“Moonlight Drawn by Clouds” airs every Monday and Tuesday on KBS.