The cast of “Happy If You Died” showed off their characters’ vibrant personalities in colorful character posters.

“Happy If You Died” is about a horrible boss Baek Jin Sang (played by Kang Ji Hwan), and his co-worker Lee Luda (played by Baek Jin Hee) who is determined to change him.

In the official posters, the five characters show off their personalities in an office-themed, colorful photo shoot. Kang Ji Hwan holds half his necktie in one hand, and appears quite angry. He exudes the charisma of a boss, while his caption reads, “Feeling hurt is your share!” Baek Jin Hee, on the other hand, is the opposite with her breezy smile. She holds the other half of Kang Ji Hwan’s necktie as well as the scissors that sheared it off. Her unpredictable behavior is shown in her caption: “If he can’t quit, then the answer is to change the boss!” 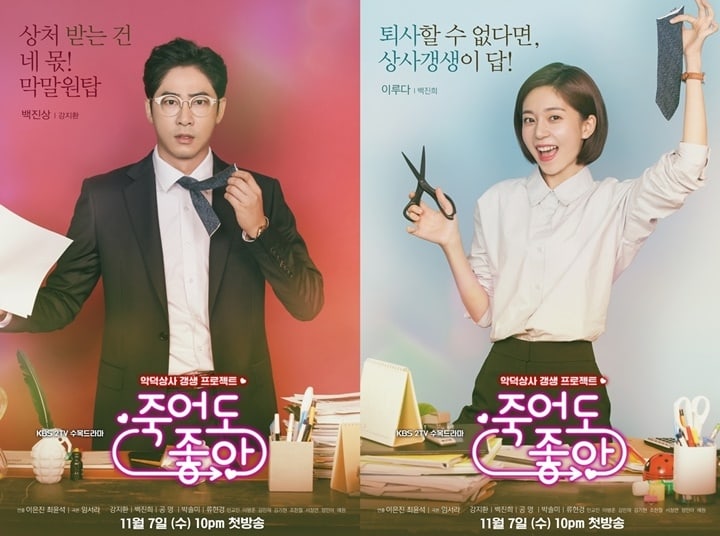 Gong Myung, who plays Kang Joon Ho, has a mischievous gleam in his eye and has an aura of unpredictable energy. His caption reads, “I’m the psycho in this area.” Park Sol Mi plays Yoo Shi Baek, the director of strategic planning who has legendary restructuring skills. With a chilly gaze and sharp charisma, her caption declares, “Is it hard? I’ll fire you! Elegantly.” Ryu Hyun Kyung plays Choi Min Joo, a member of the marketing team that deals with every problem that comes her way whether it be big or small. Her caption gives further details about her character, and reads, “Working mom? If you haven’t tried it, don’t say anything.”

“Happy If You Died” will air its first episode on November 7 at 10 p.m. KST. Check out teasers for the drama here!