Highlight’s Lee Gikwang spoke about the tough times before his debut on JTBC’s “Please Take Care of My Refrigerator.”

Hwang Chi Yeol began, “When I first came to Seoul, sunlight didn’t enter my room. It was to the point where the light on the router seemed bright. I wanted to eat pork belly, but I wasn’t in the situation to afford it, so I tried eating a spoonful of cooking oil instead.”

MCs Kim Sung Joo and Ahn Jung Hwan then turned to Lee Gikwang. “My story isn’t as bad as Hwang Chi Yeol’s,” said the Highlight member. “Before I debuted as BEAST, six trainees lived in a half-basement where the sunlight didn’t really enter. If we opened the small window in the bathroom while showering, we could see the ankles of people walking by. We lived in a really cramped place. It was a total of eight people including the two managers.”

He continued, “There were two rooms, so we used one room as storage and put all of our clothes in it. All eight of us lived in one room together. We went up onto our individual bunk beds when we ate meals.” Hwang Chi Yeol made everyone laugh by saying, “I don’t think my suffering can be counted as suffering anymore. Four people slept together in our half-basement.”

When asked about the bathroom situation, Lee Gikwang explained, “If we had a scheduled event early in the morning, three of us would go into the shower booth together.” Hwang Chi Yeol reiterated, “I won’t consider my story as suffering. We were able to shower individually. I will consider my story as full of blessings.” 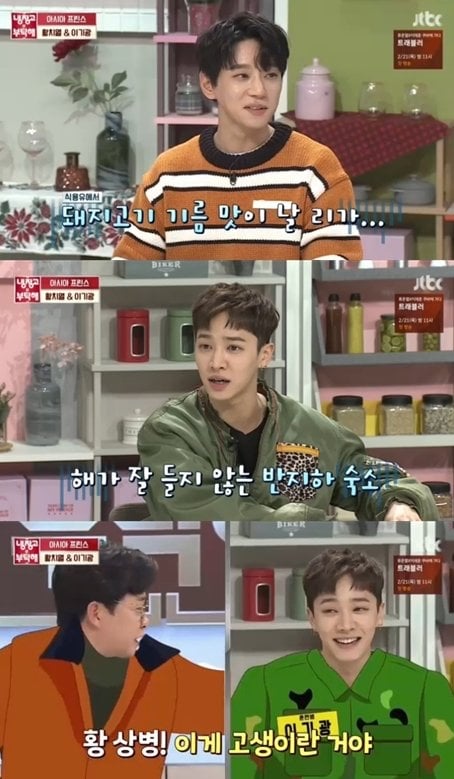 Lee Gikwang will enlist in the military on April 18 and receive five weeks of training before serving as a conscripted policeman. He will be the third Highlight member to enlist after Yoon Doojoon and Yang Yoseob.