On the February 11 episode of MBC’s “Section TV,” Hyolyn shared her thoughts on promoting as a solo artist, her friendship with SISTAR, and acting.

Hyolyn and model Jung Hyuk were selected as the models for a jean company in 2019. She said, “[Jean ads] were something I’ve been wanting to shoot,” and revealed some secrets behind good poses.

This year is the 10th year anniversary of Hyolyn’s debut. When asked if her income is higher now as a solo artist compared to when she was with SISTAR, Hyolyn confessed, “My income was higher when I was promoting with the members versus being on my own.”

She continued, “I think there are many downsides to being a solo artist. The spots the SISTAR members used to fill are now empty. I can’t fill the times we promoted together with anything. I think about my members when I’m going through a hard time. They’re the kind of friends who give you 10 answers when you’ve asked just one question.” Speaking about keeping in touch with the SISTAR members, Hyolyn replied, “We met up for Bora’s birthday. We meet up more often than I expected.”

Hyolyn has earned the title of “OST queen” after singing soundtracks for many dramas. On whether or not she wants to try acting, she answered, “I don’t. I would feel embarrassed that everyone is looking at me.” She also named the OST she sang for “Master’s Sun,” “Driving Me Crazy” (literal title), as the soundtrack she cherishes the most. 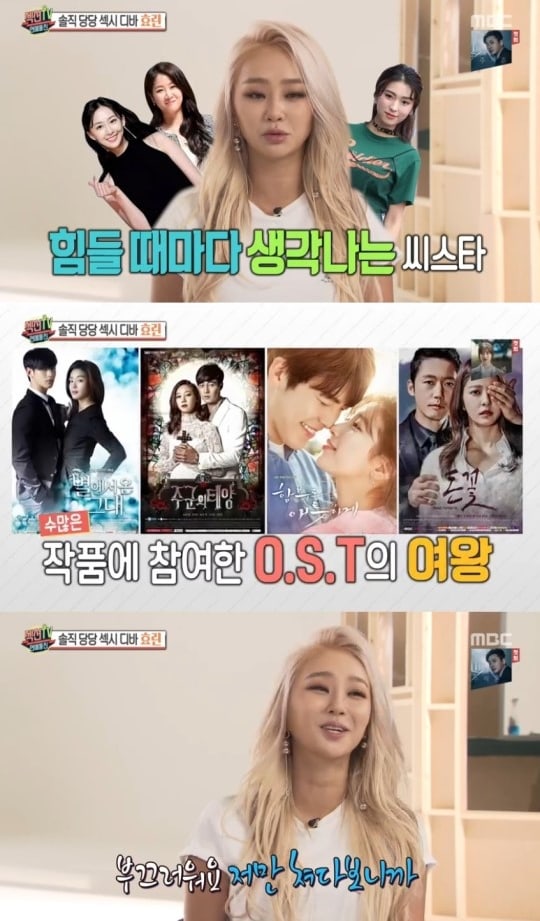