HyunA Reveals Approach To Online Comments About Herself And Triple H

During K STAR’s newest reality show “Triple H Detective Agency,” which follows HyunA’s journey with her new unit, Triple H, the more experienced idol had some wise words to pass on to her juniors.

The trio, consisting of HyunA and PENTAGON’s E’Dawn and Hui, ventured out to an exhibition that was centered around the theme of “youth” in order to feel more inspired about their upcoming unit.

While observing the pieces from the exhibition, HyunA expressed to the two PENTAGON members, “I wish that we were fearless ‘children’ during the upcoming album promotions. Also, let’s not look at any online comments during our first week of music broadcast performances. Let’s only focus on putting on a good stage at least for the first week.” 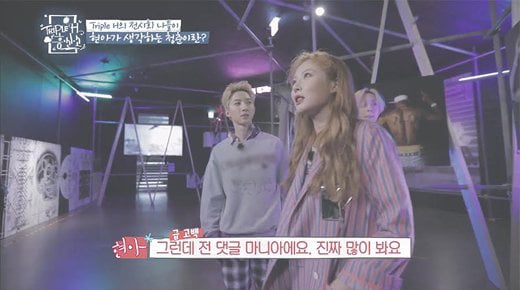 However, later during a side interview, HyunA revealed how actually she is personally obsessed with reading comments.

“I really do look at them a lot [because] now I’m confident that even if I read online comments, I won’t be shaken. Since the people who love me believe in me, I don’t want to show my rattled self,” she explained. “I advised Hui and E’Dawn differently out of worry that they might have a hard time and become discouraged about working with me, who’s been in the industry for a long time.”

What would you say if you were in HyunA’s shoes?