From her stunning voice to her gorgeous appearance, it’s no wonder tons of male idols have fallen for IU. Here are 15 who have openly admitted to being a fan of her!

Wonwoo has admitted to being a big fan of IU and often recommends her music. 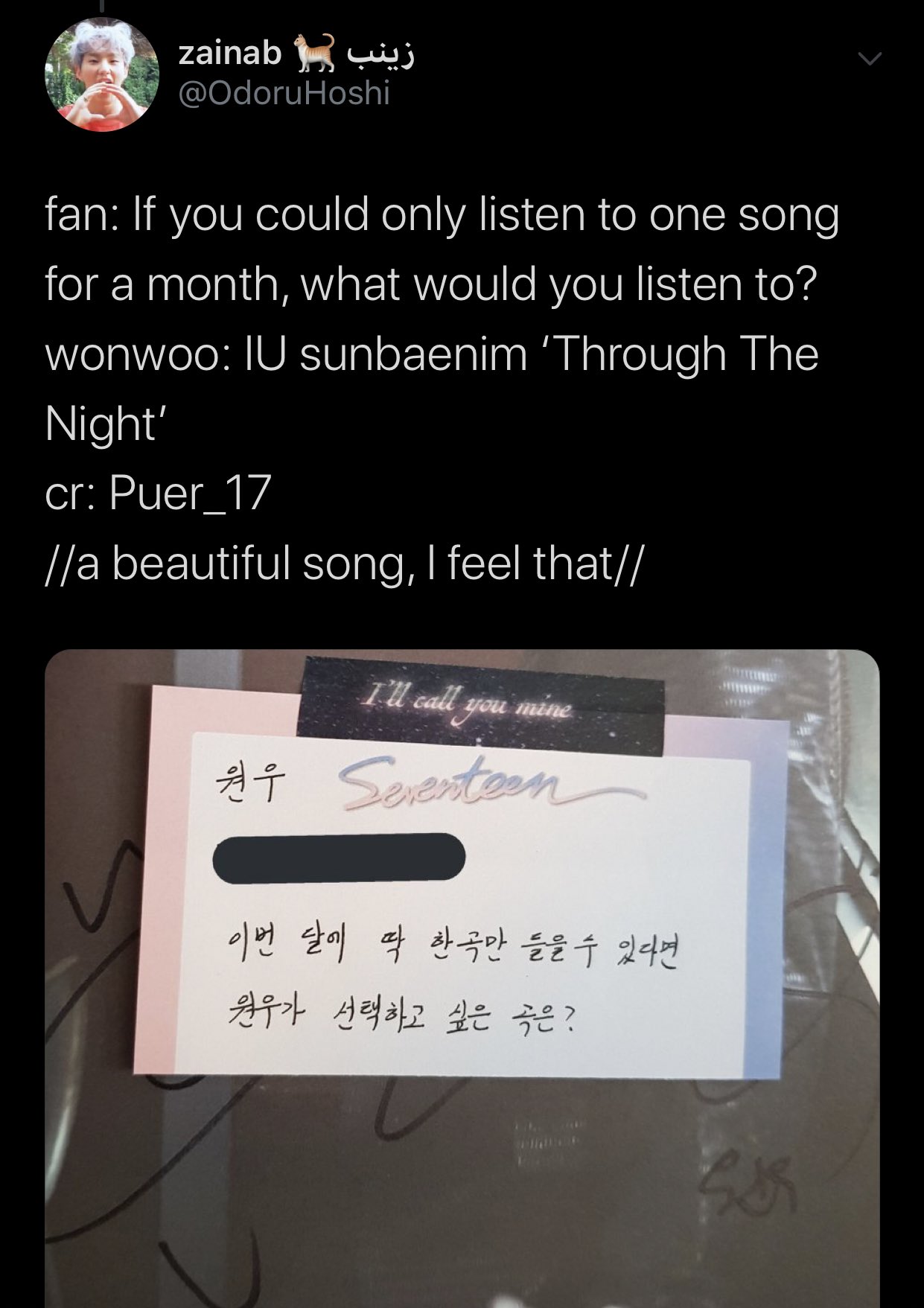 One time a SEVENTEEN member commented on Seungkwan’s live broadcast suggesting her music, and it didn’t take long for fans to realize it was Wonwoo!

IU ‘Through the Night’

He’s also a big fan of her music and has covered many of her songs throughout the years.

Beomgyu is playing IU's "Through the night" as he said this song is like a night song atmosphere as whereas he said he watches IU's stages on the internet and wanted to attend to her concert someday!????@TXT_members @TXT_bighit pic.twitter.com/1sH37nBYsP

He’s so familiar with IU’s music that he named her song “Friday” as a song he could play on guitar with his eyes closed.

op asked beomgyu if there were any songs he could play with his eyes closed because he practiced (those songs) so much
????: oh…there’s a handful…
op: there’s alot? name oneㅠㅠ
????: Dean sunbaenim’s D(half moon), officially missing you, Friday (IU)

Hyunjin has been recommending IU’s songs “Lullaby” which made he suggested as a calming song.

Idk what was the question but
He answered
" I LOVE #IU SUNBAENIM ,I wanna recommend ;
Lullaby by IU
Heart by IU
Thinking about you by katie#StrayKids #Hyunjin
pic.twitter.com/pHleUv6c9n

Sunoo chose IU as his favorite artist and even thanked her for singing I-LAND’s “Into The I-LAND.”

In 5 years from now, I want to see IU and Kim Sunoo collaboration. Sunoo answered before that he wants to collab with IU and he also thanked IU while he is still on I-land.

I love IU so much and Sunoo is my bias. If that will happen, I’ll be the happiest man alive. pic.twitter.com/noh7zdUdoA

Hyunjae has been open about his love for IU since the beginning.

He has even tweeted about her and praised her music.

All of IU sunbaenim’s songs are masterpieces and I really like ’When Love Passes By.’

Jaehyun also named IU as someone who is his ideal type.

He also chose her as his ideal partner for a duet.

Suho consistently proves his status as IU’s fan ever since 2012.

EXO's Suho being IU's fanboy for all these years.

Minhyuk is also known as a long-time IU fan who loves to cover her music.

BTOB Minhyuk
Through the Night Cover

Minhyuk is famous for his long-time IU fan.
He recently picked IU's "Through the Night" and "Give You My Heart" as the songs he wants to cover the most in "Weekly Idol."

MJ once chose IU as an artist he would like to collab with.

Unlike your typical musical collaboration, Jinwoo wishes to act alongside IU and admitted to being a fan of her.

WINNER’s Jinu chose IU as an actress he wants to film a movie with.

“I really like IU sunbaenim & also her songs” & shared he’s jealous that she’s friends with Mino and even left a message for her saying not just for acting, but he also wants to meet her personally. “I’m a fan!” pic.twitter.com/sAxVvdoLVc

Sungwoon picked IU as his ideal type of girl.

Ideal Type: Age doesn’t matter. Some who is cute, has a height between 160-170 cm, looks innocent, has big eyes, can cook well, and has long straight hair. He has mentioned singer-songwriter IU as his ideal type. pic.twitter.com/2GPoUUDvVn

Jae is a repeat offender when it comes to listening to IU.

Jae said he'd retire if IU will ask him for a collab???????? Because it would be the peak of his career???? Lol i so love this guyyy plss Jae x IU or Day6 x IU???? Stan Day6 y'all ???? UaenaMyDays where you atpic.twitter.com/3rGjnrSrNK

He often names her as an artist he would collab with and loves to listen to.

Did you all know about this magazine HaruHana? Jae listened to IU and watched an anime. pic.twitter.com/3uscbNrr8V

Donghan admitted that IU has been his ideal type since he was young.

in a recent interview, kim donghan picks iu as his ideal type “if I have to choose a celebrity, it will be iu sunbaenim, I have liked her since when I was young.” https://t.co/QGjji56vb2… https://t.co/36KmoOcO8Q pic.twitter.com/8qkiY5ywZH