IU will be taking legal action against a YouTuber, who, during a recent live broadcast, made sexual comments about the singer. The YouTuber (hereafter referred to as “A”) said, in response to a question asking if he likes his dog or IU, “Of course I like IU. I can’t help myself. Why? Because a pet can’t give me ***, but IU can.” He continued, “Because life is sex… you can understand, if you’re a man. That’s life.”

When a viewer commented that he could get sued for his comments, he responded, “If IU were to sue me, it would be an honor. Then I could meet IU in court. If I tell her I’m her fan, she’ll let me go. If I meet IU, we can talk and she’ll forgive me, so it’s a win.”

Fave Entertainment, IU’s agency, is filing an official lawsuit, having decided that the severity of the slander should not be overlooked, and said that there will be no leniency. 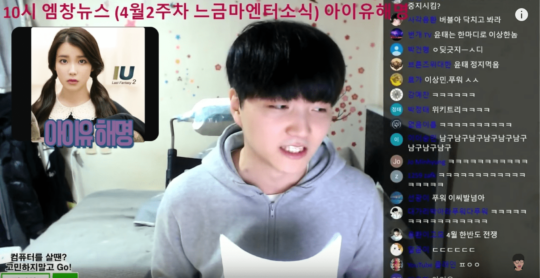 Following news of the lawsuit, A posted a video explaining that he was purely joking, and that through transcribing what he said, news articles have made him look like the bad guy because the original, joking tone in which he delivered the lines in question was not expressed. “People who regularly watch my show will know this, but I say a lot of sexual comments, and make a lot of these types of jokes.”

“What caused the problem was that I’m always gushing about IU. ‘I really like IU,’ ‘IU’s my ideal type.’ I always say things like this, so a viewer asked me if I like my dog more, or IU. I said of course IU, and made a sexual joke. With the [headlines that reporters wrote about this], there’s no way people aren’t going to misunderstand. People who watch my show just laugh and move on. Because there’s no real meaning behind what I said.”

Continuing, A said, “Honestly, there’s nothing for me to even explain. It’s because I really like IU. I really really like IU. F***, I’ve had IU as my phone background for six years now. I did it because I just like IU so much, what am I supposed to do?” Apologizing, he said he had no intentions of belittling IU or any ill sexual intent. “It’s not like we’ll ever meet, anyway. I apologize. Everything is my fault, and I’ll be more careful in the future.”