Korean music artist Jay Park, who served as Chan Sung Jung’s translator during his recent appearance on the show, was slapped by Brian Ortega during tonight’s event, Park tells me. A scuffle ensued and then broken up. Ortega took issue with Park’s translation on the show.

Jay Park served as Chan Sung Jung’s translator for an interview that he had on ESPN. His company, AOMG, manages the fighter.

Park told me Ortega went up to him while Korean Zombie went to the bathroom and asked if he was Jay Park. Park said yes and, according to Park, Ortega slapped open palm slapped him.

The “trash talk” incident dates back to when Jay Park served as Chan Sung Jung’s translator during his recent appearance on an interview on ESPN.

Chan Sung Jung, also known as “The Korean Zombie”, and Brian Ortega were scheduled to square off at UFC on ESPN+ 23 before Ortega withdrew due to injury.

When Brian Ortega was mentioned in the interview, Chan Sung Jung made a comment about him. And Jay Park translated his statement like this:

It was reported that Brian Ortega had a problem with Jay Park’s translation.

Having an Injury and ducking are 2 different things.

They have no clue what I have sacrificed. #2020

When ESPN posted this interview…

TKZ’a trash talk game is getting spicy ???? (via @arielhelwani)

…Brian Ortega left a comment to serve as his response to the trash talk. 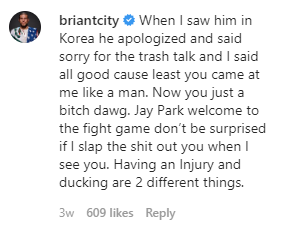 And he even went as far as threatening to slap Jay Park when he sees him.

Jay Park welcome to the fight game don’t be surprised if I slap the shit out you when I see you.

Jay Park responded to him by saying: 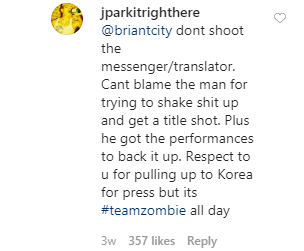 He ended the conversation by replying to Jay Park’s comment: 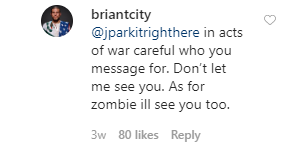 The slapping incident led to the two UFC fighters to have a physical confrontation.

The fight ended when Brian Ortega was escorted out of the arena.

Brian Ortega getting escorted after trying to start a fight with Zombie pic.twitter.com/21FmOsZB8E