Jeon Somi recently revealed how she gets in the mood to sing love songs.

The former I.O.I member made a surprise appearance as a guest on KBS 2TV’s “Yoo Hee Yeol’s Sketchbook” during Eric Nam’s interview. She garnered a round of applause from the audience when she announced, “I came because I have something to celebrate. When I was here as a member of I.O.I last year, I was an elementary school graduate, but now I’m a middle school graduate.” 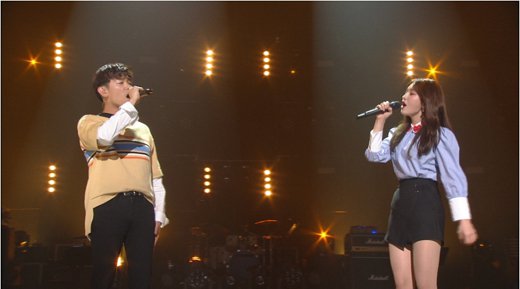 Eric Nam and Jeon Somi also talked about their recent duet and stated, “We felt the need for a new generation of spring songs [so we made a new one].” Considering how young Jeon Somi is, she was asked how she connects with love songs as she’s never been in a relationship before. The duo had everyone laughing when they revealed that to get in the mood for love songs, Somi will think about fried chicken.

The two singers also performed Crush’s “Beautiful,” with English lyrics that Eric Nam had written himself. Both of them revealed during the interview that they are fans of Crush and want to work with him.

Eric Nam and Jeon Somi’s appearance on “Yoo Hee Yeol’s Sketchbook” will be aired on April 8 at midnight KST.