On the April 22 episode of the variety show, the cast competed for the chance to create the content rating clip that airs before each of their episodes.

Ji Suk Jin and Song Ji Hyo paired up for the mission, which required them to cast a guest star, and they tried to think of celebrities to cast for their clip, while keeping in mind the rule that whoever cast the oldest or youngest guests received zero points.

After some thought, Ji Suk Jin brought up Jin, proudly boasting of their close friendship. He then called Jin to attempt to cast him, with Song Ji Hyo looking surprised when Jin answered Ji Suk Jin’s phone call.

Song Ji Hyo sang a bit of BTS’s “Blood Sweat & Tears” over the phone and excitedly said hi to Jin. When the BTS member heard that they were filming “Running Man,” he greeted the viewers and said, “I can’t believe my voice is going to be on ‘Running Man.’” 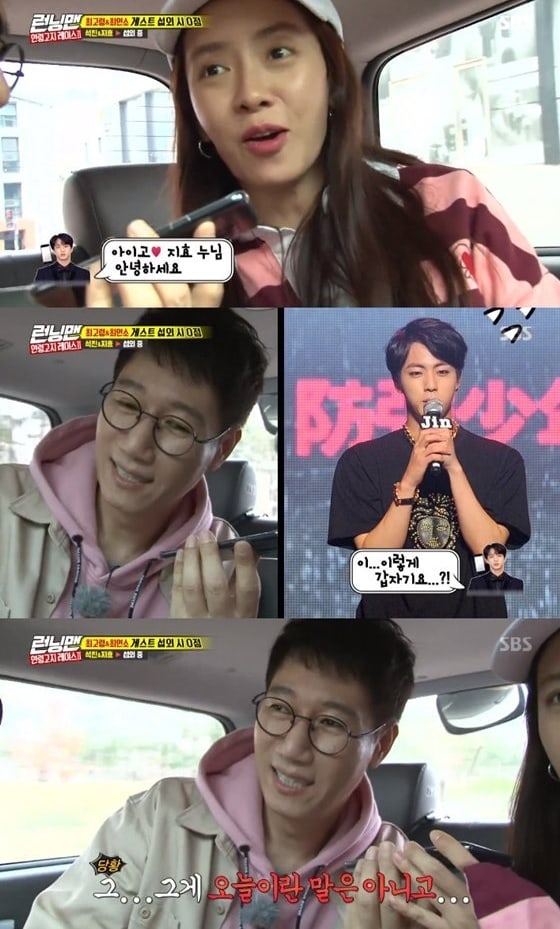 Jin went on, “I’m Kim Suk Jin who is close with Ji Suk Jin because we have the same name.” Ji Suk Jin asked him where he was, and Jin replied, “I’m currently filming something with the members.”

When Ji Suk Jin asked if he was in Korea at the moment, Jin answered, “I am in Korea. Please call me whenever you want to see me.” Upon hearing his invitation, Ji Suk Jin and Song Ji Hyo immediately asked him if he had time to see them today.

He went on to explain that he was busy filming, and in the end, the duo was unable to cast him because of his scheduling conflicts.

Catch up on the latest episode of “Running Man” below!